‘Forge’ Super Yacht, Modeled in Shape of Volcano, Will Cost a Fortune 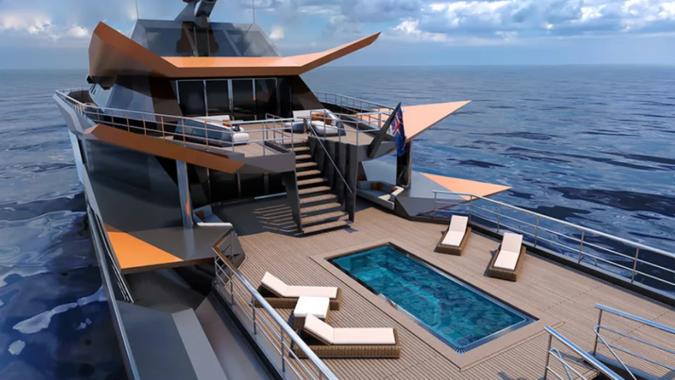 Retirement at Any Age: Get Top Retirement Tips for Every Stage of Life
Explore: Your Biggest Money Etiquette Questions Answered

Clearly this is a price tag that only the wealthiest of the wealthy can cover; but, even among the world’s top earners, there are yachts out there that might be a bit out of budget.

Consider the latest in this league of luxury vessels: “Forge,” a mega yacht built in the shape of a volcano.

In August, Anthony Glasson of the design studio M51 revealed his concept for “Forge,” which measures 262 feet long. Modeled after Mount Vesuvius, this enormous ship is designed to look like a volcano towering over the open seas. Forge sports a number of glitzy amenities, including a sauna, a gym, a sensory deprivation tank, a swimming pool, fold-out balconies and, naturally, a helipad.

So how much does this stunning vessel cost? We actually don’t yet know the exact price, but it’s going to be quite a pretty penny.

Pricing Depends on a Few Factors

“The price on any project would depend on the shipyard,” said Ruzlan Farzan, managing partner at Romeo United Yachts. “Usually, boat builders give a quotation of the overall cost of a yacht based not just on overall length, but on volume.”

Also factoring into the cost of a yacht is the amount of work that went into it.

“Any yacht construction is a lot of working hours, and the higher the labor cost in any country, the higher the total will be,” Farzan said, adding that Forge, if constructed in the Netherlands, will cost about €110,000,000 to build.

Materials also play a significant role in the overall cost of yachts.

“Forge is designed to be equipped with an ice class hull, meaning extra strength and thickness of the steel hull, and a hybrid power plant,” Farzan said. “That would add another 5-15% to the overall cost.”

Other Mega Yachts Are Even More Expensive

Few yachts for sale are anywhere near as expensive as Forge will be. But Forge isn’t the first super extravagant yacht to sail onto the market, nor is it the most extravagantly priced.

“There are yachts even more expensive than project Forge,” Farzan said.

Forge definitely will cost well over the $100 million that will go into making it, but some mega yachts cost even more. For example, the world’s largest private yacht, Azzam, built by the German shipyard Lürssen Yachts, is priced at $650 million, according to Prestige.

The vessel is 180.65 meters long and has its own missile defense system and is so heavy and precisely balanced that the epic chandelier within is said to not budge in the slightest — even when the yacht (one of the fastest in the world) is blazing along at full speed.

Another exorbitantly expensive yacht is the Eclipse, which is priced at $1.5 billion, according to Prestige. The 162.5-meter-long vessel is, like Azzam, built to survive a war, replete with a missile detection system and bulletproof windows in the master suite. Eclipse was constructed by the German shipbuilder Blohm+Voss and is owned by the Russian billionaire Roman Abramovich, who has a net worth of $8.7 billion, according to Forbes.

But there is an even more expensive yacht asea: History Supreme, which is priced at $4.8 billion, according to Prestige. The mega yacht is 30 meters long and made of solid gold and platinum and touts a real T-Rex dinosaur bone on a meteoric stone wall.

Clearly, the sky’s the limit for these mighty vessels of the high seas. So who then likely will buy Forge?

“[Forge] is in a size and price range that makes not just buying but running her a major financial commitment,” said Doug Bird, VP of sales at Get My Boat. “A crypto billionaire seems like a good fit!”