What Are the 10 Most Expensive Pokémon Cards? 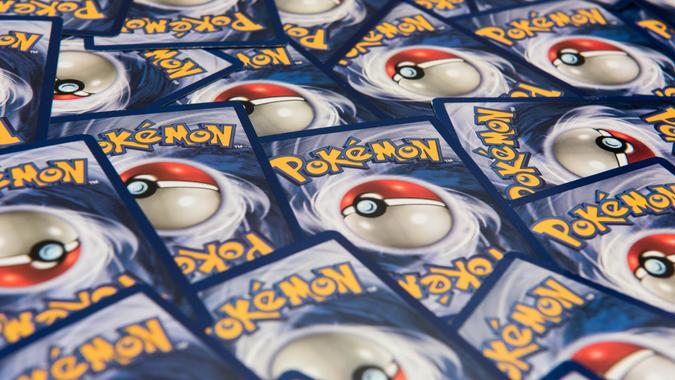 Pokémon, short for pocket monsters, was first introduced in 1996 in Japan. It quickly gained popularity and remains a fan favorite more than 25 years later. Initially a video game series, the brand since has had an anime show, trading card game, mobile app, non-fungible tokens and toys.

The Pokémon trading cards quickly became coveted collectors’ items, especially for diehard fans. The cards are marked with one of three symbols in the bottom-right corner:

Do you have one of the most expensive Pokémon cards? Do you own any of these and are your cards worth the money? Here’s the list of the 10 highest-selling Pokémon cards.

What makes it special: This was a trophy card during the 1999 Tropical Mega Battle in Hawaii. The tournament was an invite-only event where players from around the world competed.

What makes it special: Another promotional card, this was only awarded during a single 2-day event held in Japan. To enter the competition, people had to complete a test called the “Tamamushi University Hyper Test.” After entries were received, 1,000 participants were selected to participate in the tournament, and those who won a battle got this card.

What makes it special: Best estimates show that only seven people were awarded this unique card during a 1999 tournament in Tokyo, Japan. Players had to compete and win in regional tournaments to enter the national tournament for a chance at this super-secret battle trainer card.

Specifics of the particular sale: The PSA rated the condition of this card as GEM Mint 10.

What makes it special: This card went to just three finalists of the 2006 Pokemon World Championship tournament in California. To participate, players had to accumulate points and earn spots in their division finals.

Specifics of the particular sale: The PSA rated this card as being in Mint 9 condition.

What makes it special: Many people love Lugia cards because the Pokémon was on the box art for the second generation of Pokémon games. It’s not uncommon for collectors to have one — PWCC, the largest trading card marketplace, says almost 1,300 have been submitted — but only 41 have received a PSA 10 rating. PWCC believes this card may sell for even more in the future.

Specifics of the particular sale: This card received a rating of Pristine 10 from another well-known card grading company, Beckett Grading Services.

What makes it special: As one of the rarest cards in the world, it was only given to a handful of winners during an exclusive 1998 Parent/Child Mega Battle tournament in Japan. Families battled against each other, and only the ones who could get a certain number of wins got this card.

Specifics of the particular sale: The PSA has only rated 46 of these cards in total, with only this one receiving a perfect GEM Mint 10.

What makes the card special: This rare card depicts Pokémon Company founder Tsunekazu Ishihara. What makes this particular card even more valuable is that it’s signed by Ishihara.

Specifics of the particular sale: The PSA rated the card as Near Mint 7. Isihara’s autograph was graded 9 out of 10.

What makes it special: In 1998, before Pokémon came to the USA and skyrocketed in popularity, Wizards of the Coast did a test run for some Pokémon cards. This card came from that run, which was never meant for the public and doesn’t have any printing on the back of the card.

What makes it special: Another Charizard card, this one is a first edition of the shadowless holo card. This was an early Pokémon design, which means it was simple, without shading behind art and text to make the graphics pop.

Specifics of the particular sale: This particular card is ranked as a GEM Mint 10 by PSA.

What makes it special: As the most popular and well-known Pokémon character, it’s no surprise that Pikachu tops the list of most valuable Pokémon cards. Only 39 Pikachu Illustrator cards were given out to the winners of three art competitions conducted by CoroCoro Comic magazine.

Specifics of the particular sale: The PSA rated this card, which was sold to Logan Paul in a private auction, as GEM Mint 10.

As the most successful media franchise in the world, Pokémon products are in high demand, and new rare cards are still being printed. If you can get your hands on one, you may be able to get a hefty profit out of your hobby.

Cynthia Measom and Daria Uhlig contributed to the reporting for this article.