How Much Are Nobel Prizes Worth? 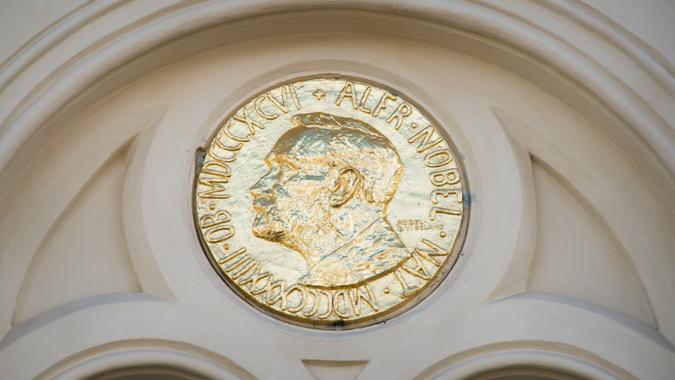 If you happen to win a Nobel Prize this year, you’ll receive a gold medal and the admiration and respect of your peers and just about everyone else in the world — plus a big stack of cash.

Check Out: How Much Money Nobel Prize Winners Received From 1901-2020

The monetary prize associated with the most distinguished intellectual accolade in the world has changed quite a bit over the decades, with some winners making out much, much better than others. When the jackpot was biggest, the winners took home four times the amount of those who won in the years when the purse was thinnest.

In 2021, the winners in the categories of physics, chemistry, and physiology/medicine have already been announced. The winner in literature will be disclosed on Oct. 7, the Nobel Peace Prize winner will be revealed on Oct. 8, and the winner in the economics category will be announced on Oct. 11.

So, What’s a Nobel Prize Worth?

The award for the 2021 Nobel Prize is 10 million Swedish kronor. At the current exchange rate, that’s about $1,135,384 — a hefty sum, even for the best and brightest minds in the world. A handful of laureates have won in years where the prize was worth even more — but only in the last three decades.

Syukuro Manabe and Klaus Hasselmann each split half the money — one-quarter of the full $1.14 million, or $285,000 each — “for the physical modeling of Earth’s climate, quantifying variability and reliably predicting global warming,” according to the official Nobel Prize site. Giorgio Parisi took home the other 50% — $570,000 — “for the discovery of the interplay of disorder and fluctuations in physical systems from atomic to planetary scales.”

Who Determines the Size of the Prize?

Born in 1823, Alfred Nobel came from a long line of acclaimed academics and scientists — and he continued in that tradition, to say the least. The Swedish inventor, businessman, engineer, chemist, and philanthropist held more than 300 patents. It was his invention of dynamite, however, that made him one of the richest people in the world.

His will might just be the most famous final testament in history. Upon his death in 1896, a stunned world learned that Nobel had decreed that nearly all of his vast fortune was to be invested in “safe securities” to fund “prizes to those who, during the preceding year, have conferred the greatest benefit to humankind.”

His shellshocked family fought to keep his massive 31 million kroner endowment for themselves, but after five years, his would-be heirs lost their legal battle and Nobel’s will was carried out when the first Nobel Prize was awarded in 1901.

While the concept of “safe securities” has changed over the last 120 years, the fund’s distribution philosophy has not. To make sure that the money never runs out, laureates receive bigger prizes in years that the fund does well and smaller prizes when it does not.

Historically Speaking, Now is a Good Time to Win a Nobel Prize