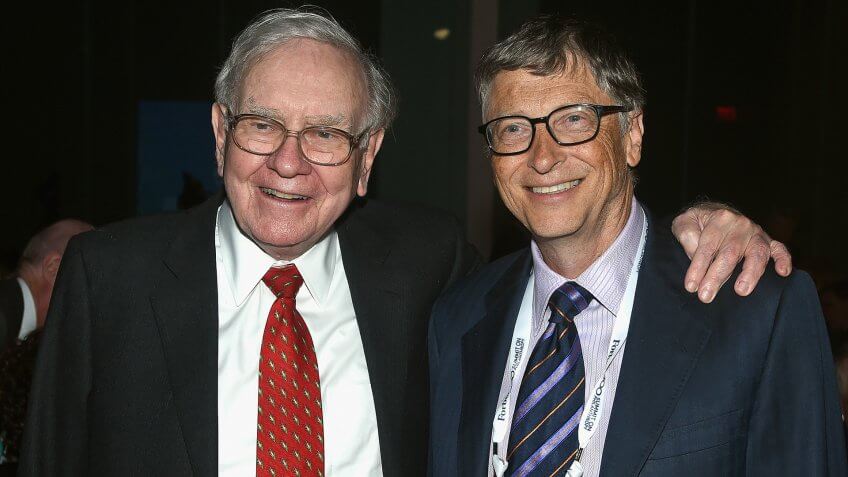 How long would you have to work to become a billionaire? Obviously, average Americans can work their entire lives and never have that much money. GOBankingRates did the math to give you an idea of how long you’d have to work to achieve great wealth on a paycheck alone.

We calculated how many years it would take a family earning the median household income of $53,889 to have as much money as some of the richest people in the world. We kept the calculations simple, though, dividing the net worth of 10 billionaires by the median household income to get an estimate of the number of years it would take to earn as much as they have.

We didn’t take into account any interest or other returns that might be earned by investing the median household income. It’s also worth noting that the billionaires’ net worth doesn’t simply reflect their income. Net worth reflects all assets (property, investments, retirement accounts) minus liabilities (any debts owed). Net worth figures are from Forbes and are current as of Aug. 9, 2017.

Don’t let the big numbers below discourage you. Instead, consider how these billionaires amassed their fortunes and figure out how you can become a money magnet, too. 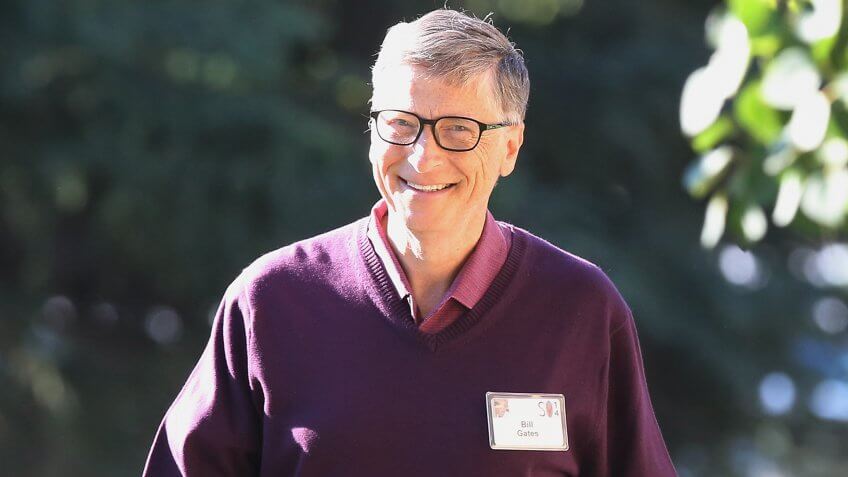 Someone with a median household income of $53,889 would have to work 1,666,388 years to earn enough to match the $89.8 billion net worth of the richest man in the world, Bill Gates. In fact, you’d have to work 2,320 years to have enough to afford even his 66,000 square-foot home that was worth about $125 million in December, according to Business Insider.

A self-made billionaire, Gates sits in first place on the list of the top 10 richest people after he built his fortune as the co-founder of Microsoft. He dropped out of Harvard to launch Microsoft in 1975 with Paul Allen, and then helped it become the world’s leading software company, according to Entrepreneur magazine.

Although he stepped down from his role as Microsoft CEO in 2000 and left his chairman position a few years later, Gates has seen his wealth continue to grow through his holdings in other companies, according to Business Insider. However, he is using his fortune to help others through the charitable organization he created with his wife, the Bill and Melinda Gates Foundation. Gates has pledged to donate 95 percent of his wealth to his foundation, according to Business Insider.

Get Started: What It Takes to Be a Billionaire 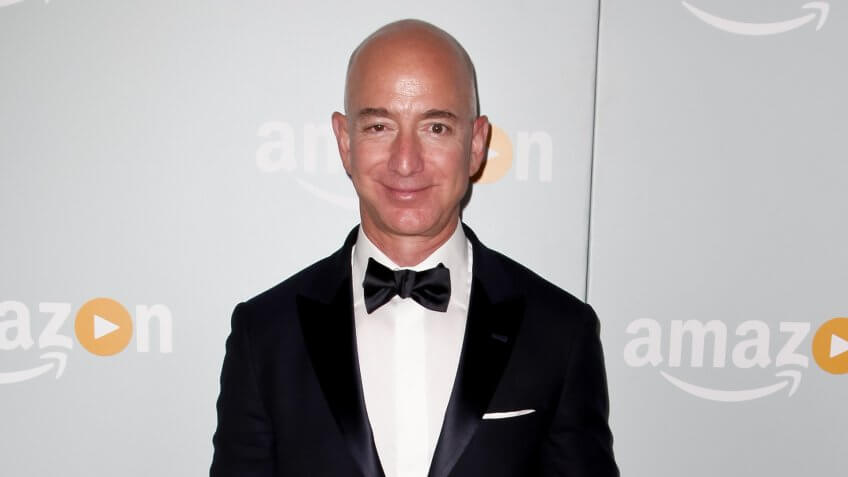 To have as much money as Amazon founder and CEO Jeff Bezos — who was briefly the world’s richest person last month — someone with a median household income of $53,889 would have to sock away that entire amount every year for 1,564,327 years. That would create a net worth equal to Bezos’ $84.3 billion.

Bezos launched Amazon from a garage in the 1990s as an online bookseller, according to CNN. Now, Amazon sells practically everything and is one of the world’s biggest retailers. Over the years, Bezos has used his fortune to found Blue Origin, a company that aims to help civilization fare in space. He also bought The Washington Post newspaper, according to Fortune. It would take 4,639 years of earning the median household income to earn the $250 million it cost Bezos to buy the Post. 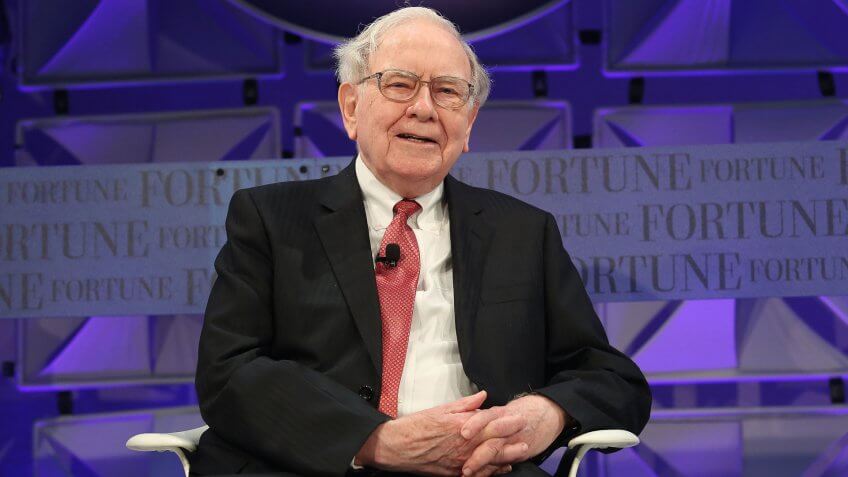 Billionaire businessman Warren Buffett knew from a young age that he wanted to be rich. Now 87, Buffett built his wealth by investing in undervalued companies through his holding company, Berkshire Hathaway.

It took Buffett several decades to build his current net worth of $76.3 billion. But it would take 1,415,873 years of earning the median household income to have that much money. However, if you were to invest some of your income and take advantage of the power of compound interest, the money would grow a lot faster. If you made a one-time investment of the median household income of $53,889 and earned 7 percent annually, you would have more than $1.5 million after 50 years.

How much money do you need to live like Buffett? Although you might not ever have a net worth that matches Buffett’s, living like him is easier than you think. That’s because the frugal billionaire has simple tastes, enjoys affordable hobbies and still lives in the same home he bought in 1958 for $31,500 — the equivalent of $270,000 today. And he has vowed to give away 99 percent of his wealth to charity, according to Forbes. Maybe your child can follow in his footsteps and become the next Buffett. 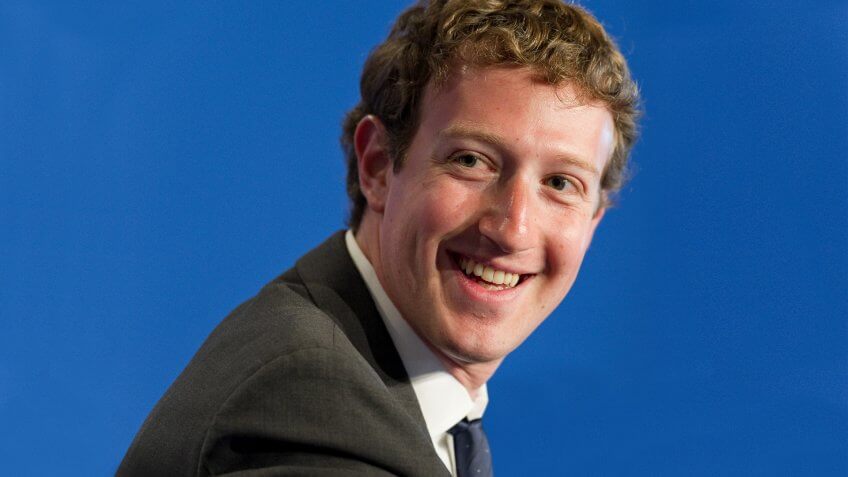 Spending hours on Facebook — the social media network created by Mark Zuckerberg — certainly won’t help you become as rich as this billionaire. In fact, you’d have to spend 1,324,945 years earning the median household income to have Zuckerberg’s net worth of $71.4 billion.

Zuckerberg was just 19 when he created Facebook in 2004 while a student at Harvard. By age 23, he already was near the top of the list of rich people, worth an estimated $1.5 billion, according to Wired. Now, at 33, he’s the fifth richest man in the world, according to Forbes.

Despite his wealth, Zuckerberg lives relatively modestly — like fellow billionaire Buffett. Also like Buffett, Zuckerberg has pledged to donate 99 percent of his wealth over his lifetime, according to Forbes. 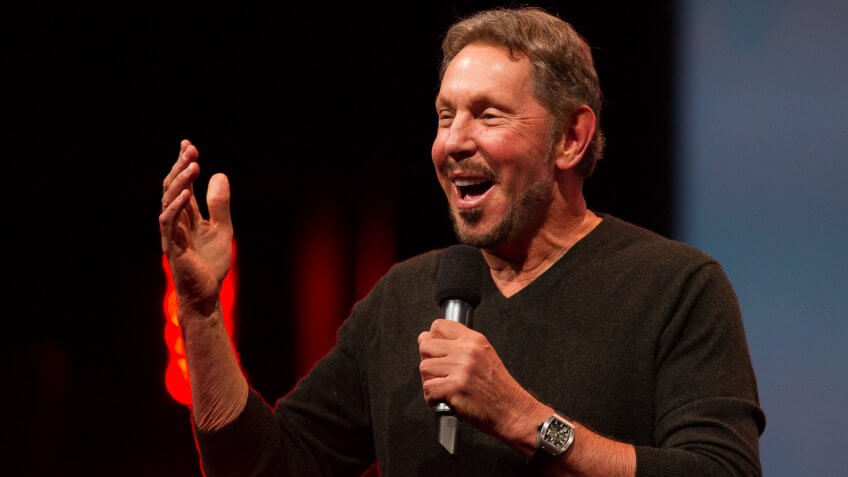 Larry Ellison has a net worth of $60.4 billion. To have as much money as the founder and CEO of Oracle, you would have to work 1,120,822 years if you earn the median income. However, Ellison started his software company with just $2,000 in funding — $1,200 of which was his own money, according to Business Insider.

Ellison has used his wealth to fund a lavish lifestyle. He owns several homes, many of which house his extensive art collection. And he paid $300 million to buy pretty much all of the Hawaiian island of Lanai. For someone earning the median household income of $53,889, it would take 5,567 years to have enough money to pay what Ellison did for his Hawaiian island. 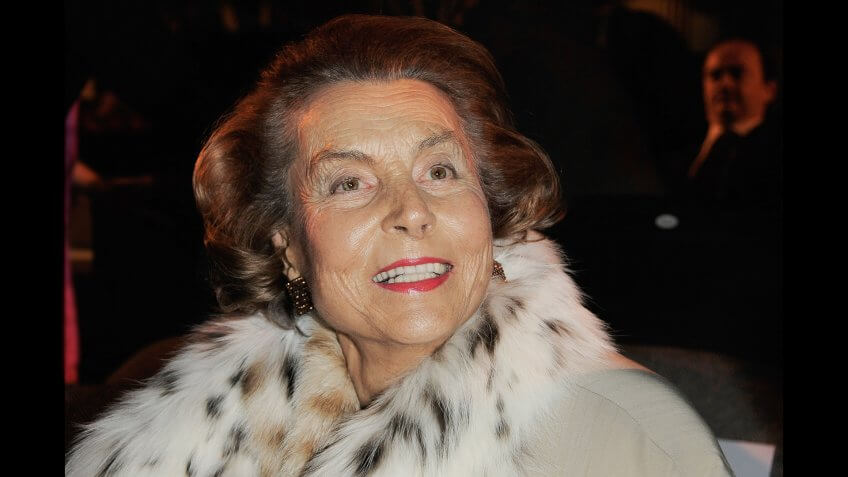 If you earn the median household income, it would take 818,349 years to match the $44.1 billion net worth of the wealthiest woman in the world, Liliane Bettencourt. However, Bettencourt didn’t earn her wealth — she inherited it.

Her father, Eugene Schueller, founded the cosmetics company L’Oreal in 1907, according to Forbes. Bettencourt owns 33 percent of the company with her children. In 2015, a French court found eight men guilty of exploiting Bettencourt — who has dementia — for her fortune, People magazine reported.

Related: Lies You Must Ignore If You Want to Get Rich 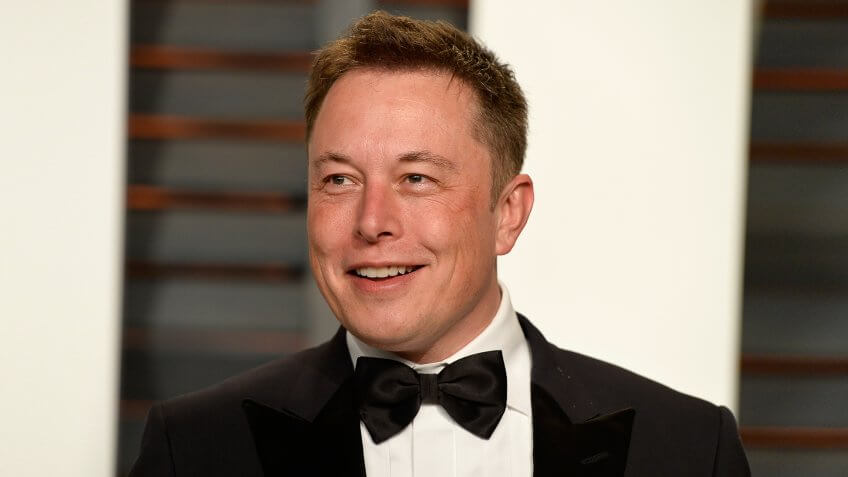 The co-founder, chairman and CEO of Tesla Motors has a net worth of $17.1 billion, according to Forbes. To amass that sort of fortune, it would take 317,319 years on a median household income of $53,889.

Musk made his first millions by selling what Forbes describes as “software upstart” Zip2 — co-founded with his brother — to Compaq in 1999. He invested that money into an online bank that merged with a rival and became online payments system PayPal. When eBay bought PayPal, Musk invested his earnings into his aerospace company SpaceX and Tesla.

One of the crazy things Musk did to get to the top was use the last $3 million he had to pay his employees at Tesla and keep the company running. Without cash of his own, Musk had to borrow from his friends to pay for living expenses. 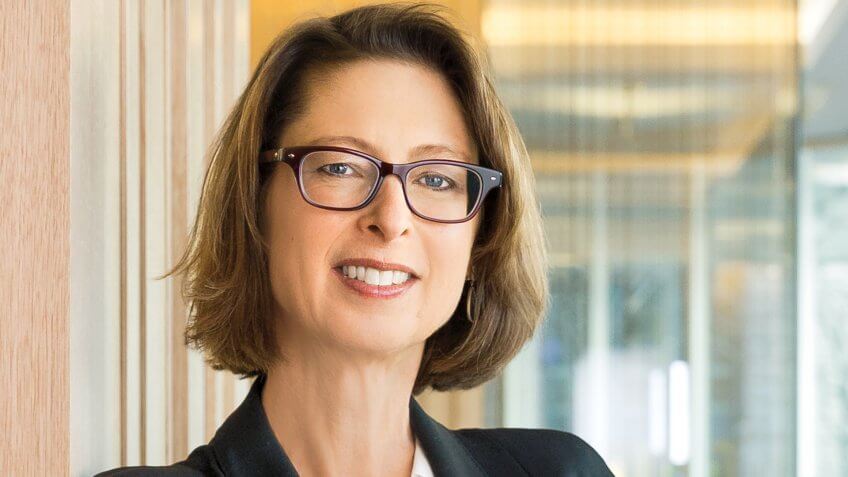 Abigail Johnson, CEO and chairman of Fidelity Investments, has a net worth $15.6 billion, according to Forbes. To earn that much on the median household income, it would take 289,484 years.

Johnson’s grandfather, Edward Johnson II, founded Fidelity in 1946, and she joined the company in 1988 as an analyst after getting an MBA from Harvard, according to Forbes. She became CEO in 2014, and then chairman in 2016. Johnson owns a 24 percent stake in Fidelity, which has $2.1 trillion in managed assets. To earn that much, you’d have to work 39 million years. Perhaps you should adjust your goals and try to achieve more modest wealth. 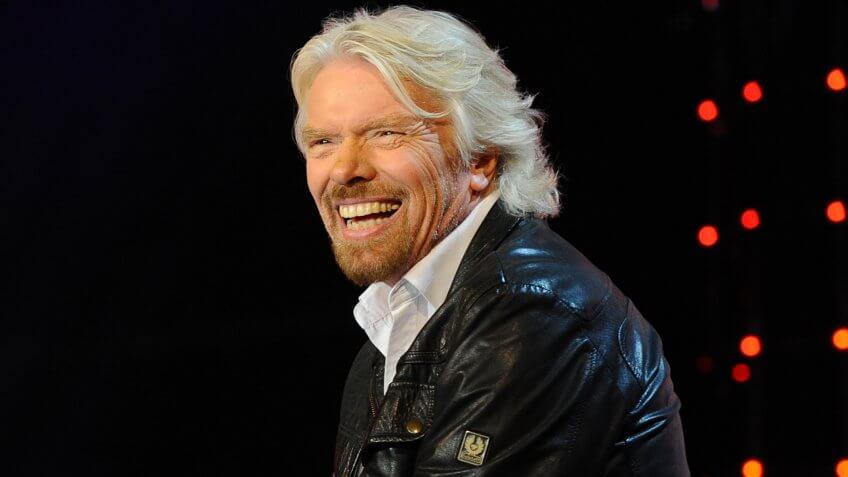 This self-made billionaire got his start with a mail-order record business that he grew into his own record label, and then into a conglomerate of businesses including Virgin Atlantic airlines, according to Entrepreneur. The empire Richard Branson has built has given him a net worth of $5.1 billion, according to Forbes. It would take 94,639 years earning a median household income of $53,889 to make that much money.

Branson has said one of his best financial moves was buying Necker Island, the 74-acre Caribbean island he calls home, according to Business Insider. The owner was asking for $5 million, but Branson got it for just $180,000 in the 1970s. That’s an affordable price many could pay, even if they are not a billionaire or millionaire. 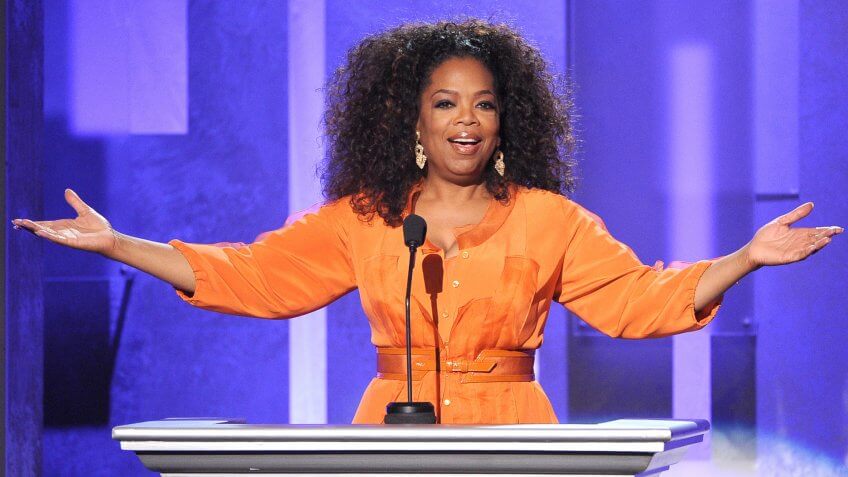 Over the years, Oprah Winfrey has worked her way up from television news anchor to talk show host to billionaire media mogul. The 63-year-old Winfrey is now worth $3.1 billion. To accrue that sort of wealth on a median income, it would take 57,525 years.

Winfrey has used her wealth to take lavish vacations and buy multimillion-dollar homes. But she’s also used her money to help others through Oprah’s Angel Network and the Oprah Winfrey Charitable Foundation. According to Inside Philanthropy, she has endowed her foundation with $240 million, most of which has gone to the Oprah Winfrey Leadership Academy in South Africa. She’s also donated millions over the years to other causes.

Up Next: How to Calculate Your Net Worth 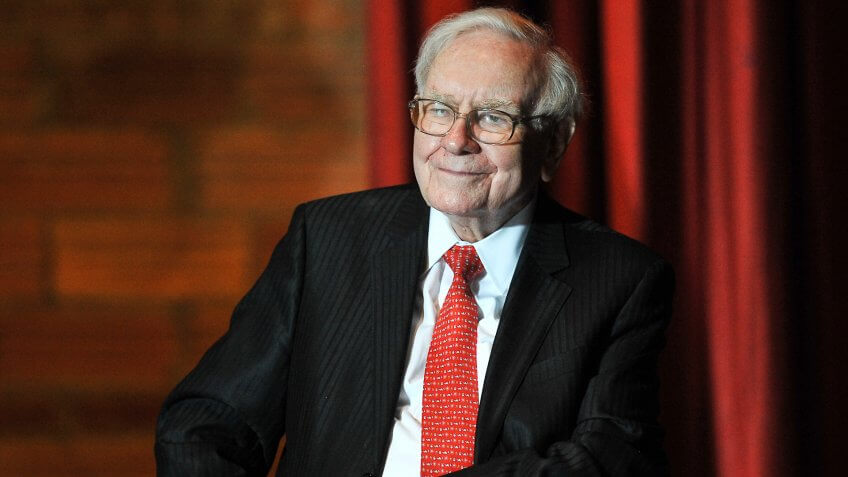 Warren Buffett and 14 Other Celebs Who Donate Millions to Charity