Film producer Harvey Weinstein was fired on Oct. 8, 2017, from The Weinstein Company, the production company he co-founded, following a New York Times story that alleged that he had been sexually harassing women for decades. Among the women that have accused him of sexual harassment or assault are actresses Gwyneth Paltrow, Rose McGowan and Angelina Jolie. Three other women also told The New Yorker that they had been raped and sexually assaulted by Weinstein.

Weinstein released an apology to The New York Times stating, “I appreciate the way I’ve behaved with colleagues in the past has caused a lot of pain, and I sincerely apologize for it.” A representative for Weinstein has denied allegations of non-consensual sex.

The allegations have already cost Weinstein his job at his former film studio. Find out how much Weinstein is worth and how this scandal could affect his wealth.

Harvey Weinstein’s current net worth is $300 million, according to Celebrity Net Worth. Weinstein built his fortune as the co-founder of two successful production companies. The first, Miramax, was founded in 1979, by Harvey and his brother Bob Weinstein. The company grew and became most notably known for financing such blockbuster Miramax films as “Pulp Fiction” and “Shakespeare in Love.” After disagreements with Disney, which had purchased Miramax in 1993 for between $60 million and $80 million, according to the Washington Post, the Weinstein brothers left the company to start their own independent studio, The Weinstein Company.

Although the Weinstein Company had a rocky start, things turned around in 2011 with “The King’s Speech,” which was nominated for 12 Oscars. The Weinstein Company went on to produce such critically acclaimed films as “The Iron Lady” and “The Artist.” Since he has been fired from the company, Harvey will likely lose his stake — and his net worth will likely decline.

The Weinstein Company’s films have grossed a total of $2.4 billion, according to Box Office Mojo. Here are his former company’s 20 top-grossing films, according to the data site:

On Oct. 10, 2017, Harvey Weinstein’s wife Georgina Chapman told People magazine in a statement that she was leaving him. The couple married in 2007 and have two children together.

“My heart breaks for all the women who have suffered tremendous pain because of these unforgivable actions,” she said in the statement. “I have chosen to leave my husband. Caring for my young children is my first priority, and I ask the media for privacy at this time.”

Although the couple is separating, Weinstein said in a statement he hopes they can reconcile after he receives treatment.

“I support her decision, I am in counseling and perhaps, when I am better, we can rebuild,” he told People. “Over the last week, there has been a lot of pain for my family that I take responsibility for. I sat down with my wife Georgina, who I love more than anything, and we discussed what was best for our family.”

Georgina Chapman’s net worth is $30 million, according to Celebrity Net Worth. Chapman has a fortune of her own as the co-owner of high-end fashion label Marchesa. If she does move forward with divorce, the division of assets could also impact Weinstein’s net worth, depending on the terms of the divorce.

Up Next: 12 of the Most Expensive Celebrity Divorces to Rock Hollywood 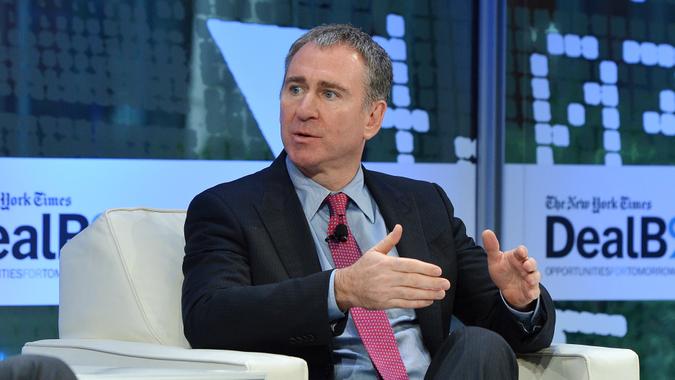 What the 6 Top Hedge Fund Managers Do With Their Billions

Check out how these billionaires spend their money.