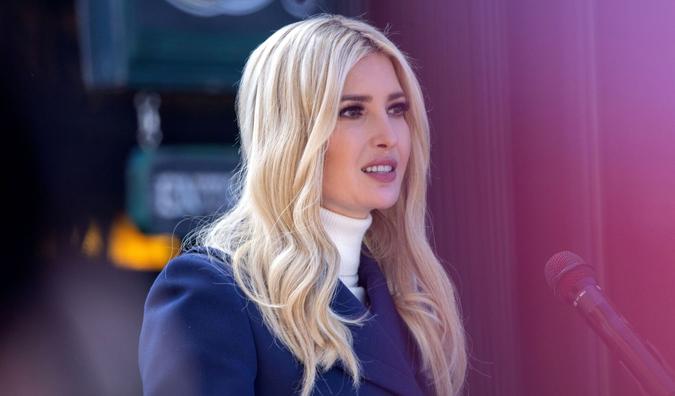 First daughter Ivanka Trump was born into wealth, but she’s worked hard to earn a reputation as a respected businesswoman in her own right. Not your average heiress, she has spent more time in the boardroom than on the party circuit.

See: How Rich Is Former President Donald Trump?
Find: Stimulus Update — States Give Out Thousands of Bonus $1,000 Checks — Will You Get One?

Widely known as the second child of former President Donald Trump and Ivana Trump, Ivanka’s combined net worth with husband Jared Kushner is $800 million, according to Celebrity Net Worth. On her own, Ivanka’s net worth is estimated to be $300 million.

Ivanka’s trust earns $5 million annually, and she also has launched several successful businesses over the past decades. As a teenager in boarding school, Ivanka began building up her personal nest egg through modeling gigs for brands such as Tommy Hilfiger, Sasson Jeans, Versace, Marc Bouwer and Thierry Mugler, Celebrity Net Worth reported.

See: What Is the Next Big Cryptocurrency to Explode in 2021?
Find: 5 Things Most Americans Don’t Know About Social Security

Before joining the Trump Organization, where she was executive vice president of real estate development and acquisitions, Ivanka was an entrepreneur in her own right. She worked with the Dynamic Diamond Corp. to design her own line of fine jewelry. Ivanka Trump on Madison Ave. was the brand’s first flagship retail store, in operation from 2007 until 2015.

After that, she launched a line of handbags and footwear sold through Macy’s, Lord & Taylor, Bloomingdale’s, Nordstrom and Dillard’s according to Business Insider. The line earned as much as $75 million in annual revenue at its peak, according to Celebrity Net Worth.

She then introduced a line of women’s work wear, which generated $100 million in annual revenue. Trump received 7% of wholesale revenues from the lines, grossing her roughly $10 million per year until she closed the lines in 2018.

Trump was named Senior Advisor to the President in 2017 but did not collect a salary for the role, Celebrity Net Worth reported.

Trump made frequently guest appearances on her father’s reality TV show, “The Apprentice,” ultimately replacing Carolyn Kepcher as a boardroom judge in the show’s sixth season as well as on “The Celebrity Apprentice.”

Other television appearances include the “Miss Teen USA Pageant” as a host in 1997 and the television series “Gossip Girl,” where she appeared as herself.

See: Top 10 Most Expensive Beanie Babies
Find: When Social Security Runs Out — What the Program Will Look Like in 2035

Ivanka puts in long hours at the office, but she also enjoys swapping her high heels for sandals on family vacations.

In December 2016, she and Kushner took their kids on a tropical retreat to the Four Seasons Resort Hualalai in Hawaii. Nightly rates at the five-star resort cost around $950, according to TripAdvisor.

The trip wasn’t all lavish, though. The family flew the first leg of the journey on JetBlue, according to the New York Post.

See: Congress Reintroduces Bill to Keep Social Security Recipients Out of Poverty
Find: 10 Best Cryptocurrencies to Invest in for 2021

Trump and Kushner got married in October 2009 at the Trump National Golf Club in Bedminster, N.J., a venue that costs an average of $54,000 to $62,000, according to Showbiz Cheat Sheet.

The bride’s Vera Wang wedding gown reportedly bore a $50,000 price tag, while her jewelry was estimated to cost as much as $265,000. Pieces included platinum and diamond earrings, bracelet and hairpiece.

The 13-layer wedding cake was adorned with real flowers and reported by Showbiz Cheat Sheet to cost $70,000.

See: What to Do if the IRS Child Tax Credit Portal Isn’t Working
Find: Here’s How Much You Need to Earn to Be ‘Rich’ in 23 Major Countries Around the World

Both Trump and Kushner have backgrounds in real estate investing, so it’s not surprising that they’ve resided in some of the most expensive ZIP codes in the nation. During her father’s presidency, Trump and Kushner rented a $5.5 million, 6,870-square-foot home in Washington, D.C., according to Town & Country.

Before relocating to the nation’s capital after her father’s inauguration, Ivanka and her family lived in a $16 million, four-bedroom New York City penthouse apartment, located in the Trump Park Avenue building.

Ivanka paid $1.52 million for another condo in the same building. She bought the two-bedroom, two-bathroom condo in 2004, when she was still single. The property initially hit the market in December 2016 for $4.1 million, or $15,000 per month in rent, according to Town & Country.

See: Here’s How Much You Need to Earn to Be ‘Rich’ in Every State
Find: The 8 Best Deals From Costco’s September Coupon Book

Since leaving their roles in the Washington, the real estate power couple has purchased a $30 million property on a private island in Miami. Indian Creek Island, known as the “Billionaire’s Bunker,” boasts its own 13-person police force for 29 luxury residences, Page Six reported.

The couple’s new lot was reported to have been owned by Julio Iglesias and boasts 1.84 acres of space, with a 200-foot private waterfront, according to Page Six. Celebrity Net Worth reported that other residents of the island include Beyonce and Jay-Z, hedge fund manager Eddie Lampert and super model Adriana Lima, although with such a sprawling expanse of property, it’s not likely you’ll encounter your neighbors unless you want to.