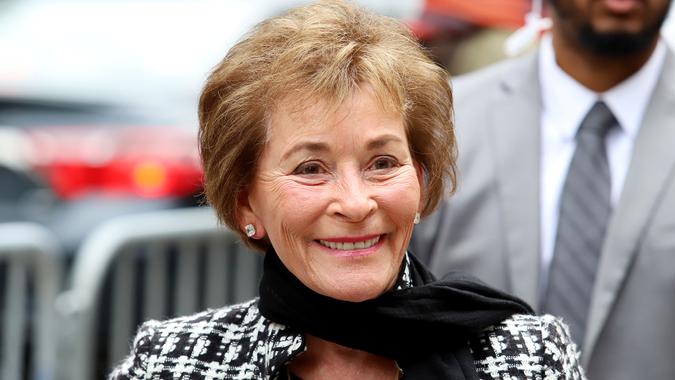 After 25 seasons in syndication, Judge Judy Sheindlin left CBS for Amazon’s IMDb TV. Her move to streaming is a big deal — and it’s attached to many dollar signs. So is her new series debut, “Judy Justice,” premiering on IMDb TV Nov. 1.

See: 25 Things You Should Never Do With Your Money
Find Out: The Average Social Security Check the Year You Were Born

As the star of “Judge Judy,” Sheindlin earned $47 million per year, according to The Hollywood Reporter. In a recent interview with the publication, she hinted Amazon would be paying her just as much — or even more — for her new show.

Clearly, Sheindlin is paid extremely well, and she’s also doled out plenty of money advice to both plaintiffs and defendants in her courtroom. You might’ve thought you were watching “Judge Judy” for the drama, but you’ve likely learned plenty of money moves from the sharp-witted judge.

In honor of the premiere of “Judy Justice,” here’s a look at some of the top financial lessons you can learn from Sheindlin both in the courtroom and her personal life.

Read: Judge Judy and 9 of the Richest TV Hosts of All Time
See: 20 Richest Women in America Right Now

Tensions with CBS were partially to blame for her move to Amazon, Sheindlin revealed in an interview with The Wall Street Journal. CBS bought out her ownership of “Judge Judy” reruns to keep her from selling them to other networks, which didn’t sit well with the sharp-tongued host.

Specifically, Sheindlin sold the rights to her library of “Judge Judy” episodes for an estimated $100 million in 2017, according to Forbes. In total, Celebrity Net Worth cites her net worth at $440 million.

Considering the size of her fortune, Sheindlin definitely knows how to manage her money. For example, she scored a 9,719-square-foot mansion in Newport, Rhode Island, for $9 million in 2018 — a sharp discount from its list price of $12.5 million in 2017 and $15.8 million in 2012, according to Realtor.com.

Find Out: Celebrities Who Are Richer Than You Think
Learn: Whoopi Goldberg and 14 More of the Wealthiest People on TV

Never Co-Sign on a Loan

Something she dealt with a lot on “Judge Judy,” Sheindlin disapproves of co-signing on loans.

For example, in one episode she said “…I’ve got a message for all you single people out there, in the audience, so listen to me very carefully — Aside from no joint bank accounts, no joint credit cards, no joint Visas until you’re married, take this home with you: NEVER co-sign on anybody’s behalf for anything, and I mean NOT EVER,” according to IMDb.

Further reinforcing this idea, in 2015, she ruled in favor of a father who served as a co-signer on his daughter’s boyfriend’s car loan. When he failed to make his car payments, the boyfriend tried to pass the nearly $5,000 debt onto the man. Instead, he received sharp words from Sheindlin and lost the case.

Another savvy piece of advice doled out by the judge is that roommates shouldn’t sign a lease on an apartment with a higher monthly rent than either could pay on their own. While pooling funds to get a nicer place together than they could afford individually might seem like a savvy idea, Sheindlin had good point.

“Then you wouldn’t have two people who are homeless, with their credit in the toilet,” she said, according to IMDb. “Then they could part ways without all that fuss and aggravation.”

A Gift Isn’t a Loan

Sheindlin has also ruled on plenty of cases regarding financial gifts that later turn into a loan.

“Do you know when a gift becomes a loan? When the relationship is over,” she said, according to IMDb.

Check Out: 6 Rude Money Questions You Should Never Ask (or Answer)
Learn: Someone Owe You Money? How To Get It Back Without Ruining the Relationship

Clearly, she doesn’t care for this change of heart, which also won’t hold up in a courtroom. The lesson learned here is gifts and loans are not interchangeable.

If you loan someone money, they need to sign a formal contract that covers the terms of repayment. Otherwise, you have no legal grounds to collect your money.

Don’t Loan Money to Loved Ones

Many of Judge Judy’s cases involve loans, which inevitably are not repaid. Since the situation between the family members or former friends got so bad that they had to go to — television — court to resolve it, consider this a red flag.

Advice: How To Say ‘No’ to Friends or Family Who Want To Borrow Money

When possible, it’s best to avoid lending money to loved ones. It might initially seem harsh, but this can actually preserve your relationship with the other person, as things tend to go south when loans are not repaid in a timely manner.