How Rich Is Bill Murray as the Comedy Legend Turns 71? 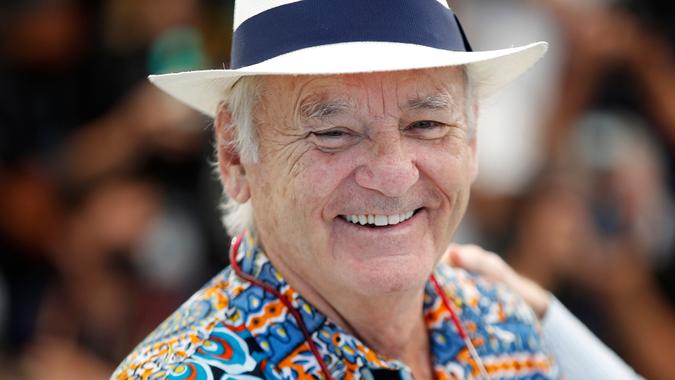 An American comedy icon who has been making people laugh with his deadpan delivery for more than 44 years, Bill Murray turned 71 today. The award-winning actor, comedian, writer and producer seems to balance doing a big project with participating in smaller, quirkier projects that he enjoys.

Having starred in such comedy staples as “Meatballs,” “Caddyshack,” “Stripes,” “Tootsie,”” Ghostbusters,” “Ghostbusters II,” “Scrooged,” “What About Bob?,” “Groundhog Day” and “Kingpin,” he has also lent his voice talents to “Garfield: The Movie,” “Garfield: A Tail of Two Kitties,” “The Fabulous Mr. Fox” and “Disney’s The Jungle Book.”

For his indelible mark in comedy, Murray received the Mark Twain Prize for American Humor in 2016. He has also showcased his dramatic chops in “Lost in Translation,” for which he received a Golden Globe award, and won the Emmy for his role in HBO miniseries “Olive Kitteridge.”

Murray is a frequent collaborator with director Wes Anderson and has worked with him on nine films to date, including “Rushmore,” “The Life Aquatic with Steve Zissou,” “Isle of Dogs,” “The Grand Budapest Hotel,” “Moonrise Kingdom,” “The Darjeeling Limited” and “The Royal Tenenbaums.”

Discover: Ellen DeGeneres’ Net Worth as Her Show Begins Its Final Season

With his impressive body of work, it is not surprising to learn Murray has amassed a fortune of $180 million, according to Celebrity Net Worth. However, as he glides back and forth between hits and independent films, his per film salary varies. Murray was paid $9,000 for “Rushmore,” but took home around $2 million for “Groundhog Day.” “Ghostbusters” earned him $6 million. However, he got $48 million for his work in “The Jungle Book.”

He is considered to be a challenging performer to work with. He has had feuds with several actors and directors and only works on projects that interest him, but that still gives him a steady stream of offers.

Murray was one of eight children, born on September 21, 1950 in Evanston, IL. He always expressed an interest in acting. College wasn’t a great fit for him, though, so he started working with a small comedy troupe in Chicago. Soon after, while appearing in a show off-Broadway, he nabbed the attention of producers of “Saturday Night Live with Howard Cosell.” While that show didn’t make it, the new and improved “SNL” enjoyed the talents of Murray from 1977 to 1980.

While his early film projects did well, a film that he co-wrote titled “The Razor’s Edge” bombed at the box office and he fled to Paris to study philosophy and history at Sorbonne University and regroup with his family. Luckily, he had agreed to star in “Ghostbusters” in exchange for the funding for “The Razor’s Edge,” and this led him starring in the (then) highest grossing comedy ever.

Murray has been married two times. He first wed Margaret Kelly in 1981, whom he divorced in 1996. He was married to second wife Jennifer Butler from 1997 to 2008. Between his two marriages, Murray is the father of six sons.

Murray is known for his unusual interactions with fans and the general public. Some examples include photobombing unsuspecting people, applying for a job at PF Chang’s, reading poetry to NYC construction workers, crashing a bachelor party and joining a kickball game.

Real Estate and Other Endeavors

While Murray’s main residence is near Charleston, South Carolina, he owns multiple properties across the country including residences in Los Angeles, California, Rancho Santa Fe, California, Martha’s Vineyard, Massachusetts and Palisades, New York. Only the $4.9 million New York property’s sale price has been made public.

Find Out: How Rich Is Jason Sudeikis?

He is considered to be a big investor in many local businesses in South Carolina, including a fresh market café called Harold’s Cabin and Rutledge Cab Co., a retro dining establishment.

He is a huge sports fan with a love of all of the Chicago teams, but he is a regular investor in minor league baseball.

Murray is slated to appear in the next Wes Anderson project, as well as “Ghostbusters: Afterlife” on Nov. 11, so it won’t be long until we see him on screen again, In the meantime, you will surely continue to catch him in the tabloids causing mischief in between projects.