How Much Is Erika Jayne Worth After Split With Tom Girardi? 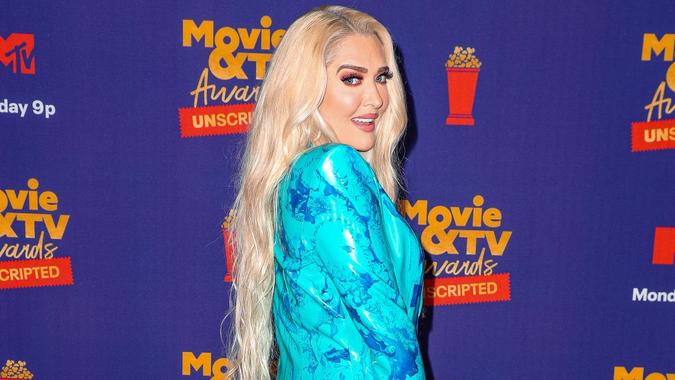 Erika Jayne — also known as Erika Girardi — came into public life as the wife of notorious Beverly Hills attorney and founding partner of law firm Girardi & Keese, Tom Girardi. This would eventually lead to her starring in the hit Bravo series “The Real Housewives of Beverly Hills.” She’s also a professional singer and actress, having done well with dance tracks including “XXpen$ive.” However, being pretty, sexy, an unapologetic shopaholic and unquestioning about the source of her wealth may be her main claims to fame. Her star has risen even more since she filed for separation under suspicious circumstances in 2020.

Read: Chip and Joanna Gaines’ Net Worth Upon Launch of Magnolia Network
Learn: What Is Gwen Stefani’s Net Worth?

This is partially because of the notorious nature and criminal embezzling habits of her allegedly estranged husband. Also, she was never bound by signing a prenup, despite a 40-year age gap. To be fair, the couple was together for 20+ years. However, the release of the Hulu documentary “The Housewife and the Hustler,” which came out in June 2021. may be one of her strongest and most damning legacy points.

Jayne’s net worth is currently listed at $5 million, according to Celebrity Net Worth, though that number could be on the rise — or not.

Tom Girardi has claimed that his net worth was valued at $264 million. He owned planes, about $9 million in jewelry and $3 million in decorations and art, However, despite his assets, Girardi applied for some questionable, yet sizable, loans for more than $10 million.

Their 10,000 square foot Pasadena estate is worth $13 million. They listed the home for sale in May 2021. If a sale occurs, all of the proceeds will go towards rectifying the couple’s debts. Erika reportedly moved out of the mansion in the previous year to a rental property in another neighborhood.

Discover: ScarJo Sues Disney for Breach of Contract – How Much Is the ‘Black Widow’ Star Worth?

As of 2016, Girardi guesstimated that the firm he was party to took home more than $110 million. However, he claimed his stock portfolio had dwindled to only a few thousand dollars after being worth more than $50 million just a few years prior.

Since he earned most of this money before they married, that is his property, but as he is alive and no one knows what divorce or a will may have in store — and there may be more lawsuits in the works — the amount actually owned by Jayne could fluctuate by a lot. But, he may have slid some funds, alleged to be $20 million, to her for safekeeping. The big questions now are where is the money and does Erika have it hidden somewhere?

Jayne, then known as Erika Chahow, was born in 1971 in Atlanta, GA where she remained until she was 18 to seek her fortune as an actor and singer in New York City. In the ’90s, she landed some work in her chosen fields while also working as a go-go dancer who wanted something better for herself. She married Thomas Zizzo in 1991 and had a son with him. A couple of years later, they divorced and she moved to Los Angeles to further pursue her career.

The Courtship of Tom Girardi

While Erika was working at a Beverly Hills restaurant, she met Tom Girardi, a prominent L.A. lawyer. He was known for being the first lawyer to yield a medical malpractice payday worth more than $1 million in California. They married in 2000 without much planning and without a prenup. It was his third marriage.

His street cred was mighty as he took and won huge cases against organizations including Lockheed Corp and Los Angeles County Metropolitan Transportation Authority. Then, he took on his most famous case against Pacific Gas & Electric, which was the inspiration for the film Erin Brockovich, and awarded $333 million to 650 residents in Hinkley, CA, to which his firm received a tidy fee of roughly 40%.

More: Meghan Markle, Half of a Financially Fit Power Couple, Is Now Worth $50 Million or More

While still in New York, Janye landed small roles in hit shows including “Law and Order,” but she asked her husband to help launch a pop singer career. In 2007, she released the track “Roller Coaster.” The single shot to number one on the U.S. Billboard Hot Dance Club Play chart. In 2009, Jayne released a full-length debut album titled “Pretty Mess.” Her husband spared no expense in helping Jayne thrive in her music career by hiring only the best to help her along with her artistic journey. Her music appeared in several films, and her catchy dance tunes have yielded a pop culture cult status.

In 2015, Erika joined the cast of “The Real Housewives of Beverly Hills.” While she used the show to publicize her entertainment endeavors, she drew some criticism for bragging about her extremely lavish lifestyle. She even claimed that she spent $40,000 per month on clothes alone. This would come back to haunt her.

Tom’s finances seemed to take a dip due to some possibly questionable legal practices. He was often accused of not paying clients or colleagues money owed to them. He and his firm got reprimanded and fined for some violations regarding flawed documents and flaws in candor that took place in a case in Nicaragua where they were trying to enforce a nearly half million lawsuit against Dole Food and Shell Chemicals based on the effects of the pesticide DBCP upon exposed workers.

In 2020, Girardi’s assets were frozen citing that he had misappropriated at least $2 million in client funds that were due to the families of those who died in the Boeing 737 MAX Lion Air Flight 610 crash in Indonesia.

His law firm filed for bankruptcy in December 2020, with the hearing taking place in 2021.

Where Are They Now: How Much These One-Hit Wonders Are Worth

It has been reported that he has been sued more than 100 times and he has received numerous complaints from the California State Bar. Allegations of malfeasance continued to surface from his former clients.

During this time, he transferred millions of dollars into his wife’s entertainment corporation called EJ Global LLC.

Girardi’s license to practice law was revoked in March of 2021. The creditor and Girardi eventually settled for an undisclosed amount.

Erika claims ignorance of Girardi’s malfeasance, but she divulged he was a compulsive cheater with a long-term mistress. Gerardi was also accused of embezzling millions from clients. His ex-wife claimed that his alimony payments had stopped. Former clients sued and that resulted in a $23 million lean on the couple’s assets.

See: The Costly Divorces of Country Music Stars
Find: Kimye and 30 of the Most Expensive Celebrity Divorces To Rock Hollywood

Girardi has been diagnosed with dementia and has claimed to be mentally incompetent for any wrongdoing. Jayne’s involvement is unclear, but further investigations into the matter are still ongoing.