How Rich Is Mayim Bialik? 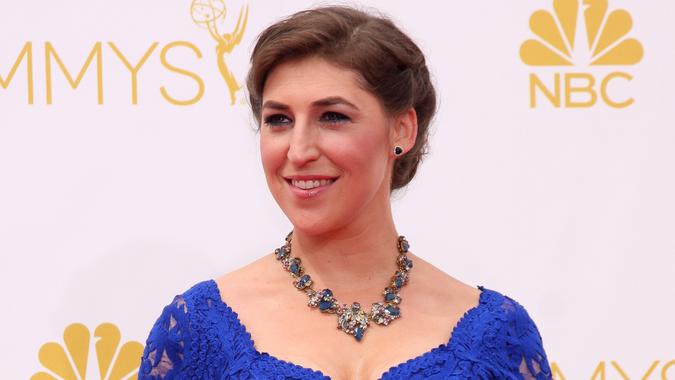 Early on in Mayim Bialik’s career, she portrayed the child version of Bette Midler’s character in the 1989 movie “Beaches.” Depending on the decade of television you grew up in, you might know Bialik best as the spunky Blossom Russo on NBC’s “Blossom” in the early 1990s. Or you might be more familiar with her role as Dr. Amy Farrah Fowler on the CBS sitcom “The Big Bang Theory,” which premiered in 2007 (though she didn’t join the show until 2010). The latter earned her four Emmy nominations and set the stage for the wealth she claims today.

On August 11, Bialik was announced as one of two new hosts for the iconic game show, “Jeopardy” and will take over hosting prime time specials, including a new college championship tournament. She will also guest-host the show daily until a full-time host is found.

See: The Richest Celebrity From Every State
Find Out: What These 32 Netflix Stars Did Before They Were Famous

Aside from the shows that made her career, Bialik has also been in a ton of other movies and shows, including some iconic television shows like “The Facts of Life,” “Webster,” “Empty Nest,” “MacGyver,” “Doogie Howser, M.D.” and “Murphy Brown,” to name a few. She also appeared in Michael Jackson’s “Liberian Girl” music video in 1989.

Read: The 28 Richest Actresses of All Time

Whichever role you appreciated most, the one that set her net worth in motion was “The Big Bang Theory.” Early on she earned about $200,000 per episode — a cool $4.5 million per season. But in 2017, thanks to the generosity of the five core stars of the show, who agreed to take a $100,000 pay cut, Bialik and co-star Melissa Rauch both received a significant pay raise to $450,000 per episode, or approximately $10 million per season for the final two seasons. That money added up quickly. Today Celebrity Net Worth suggests she is worth $25 million.

See: 8 Rich Child Stars Who Stepped Away From Fame

Bialik is perhaps one of the most well-rounded actresses — in 2007 she earned a Ph.D. in neuroscience from UCLA. Did life inspire art or the other way around? She played a neuroscientist on “The Big Bang Theory” when she joined the show.

In addition to acting, Bialik has written a number of books: “Beyond the Sling: A Real-Life Guide to Raising Confident, Loving Children the Attachment Parenting Way;” “Mayim’s Vegan Table: More Than 100 Great-Tasting and Healthy Recipes from My Family to Yours;” “Girling Up: How to be Strong, Smart and Spectacular;” and “Boying Up: How to be Brave, Bold and Brilliant.”

A dedicated vegan, Bialik co-founded the Shamayim V’Aretz Institute, a Jewish nonprofit organization that promotes veganism and animal advocacy. She also co-owned the former vegan restaurant in Los Angeles, Bodhi Bowl, with her friend Ali Cruddas, who is also a chef. In 2015, she founded the website Grok Nation, “an online community for people of all ages and backgrounds to dive deep into conversations on contemporary issues,” according to the website.

Check Out: 33 Popular TV Shows With the Highest-Paid Casts

Bialik comes from a family of Jewish immigrants and takes her faith very seriously. She married Michael Stone in 2003 and had two sons with him before they divorced in 2013.

In 1988, Bialik received her first award in her young life, a Young Artist Award for best young actress in a motion picture comedy or fantasy for “Beaches.” She received a second nomination for the award in 1990 for “Empty Nest” and in 1992 and 1993 for her performance on “Blossom.”

Can You Guess? Here’s How Much Jennifer Aniston and Other Actors Get Paid for Their Reruns

For her work in “The Big Bang Theory,” Bialik won Online Film Critics Society awards in 2012 and 2013, Critics’ Choice Television Awards in 2016 and 2018, and a Critics Choice Award from the Broadcast Film Critics Association in 2018. In 2019, she received a Keter Shem Tov Award at the Jew in the City 6th Annual All Star Awards. Boston University awarded Bialik with an honorary Doctor of Humane Letters in 2014.

Who knows what the talented actor-scientist-vegan will do next!