On March 27, the world will learn that Mariah Carey is, in fact, not an ageless immortal when she turns 47 years old. Time has been kind to Mimi, and not just in terms of that youthful glow; since her first record deal in 1993, MC has sold over 200 million albums worldwide. And it’s more than music that lines her sparkly pink pockets to generate her massive net worth — Carey’s entertainment empire spans film and TV, too, and has been valued in figures that will make you see more visions of dollar signs than “Visions of Love.”

Mariah Has a Net Worth of $520 Million

As of 2017, Mariah Carey is valued at an eye-watering $520 million, according to CelebrityNetWorth. In addition to those aforementioned 200 million albums, her 2000 contract with Virgin Records — which was, at the time, the most lucrative contract in the history of the music business — is certainly a foundation on which this figure stands. When the pen hit the paper, Virgin paid Carey $100 million for her migration from Columbia Records.

Was The Voice worth that figure? Well, she’s the best-selling female musician in Billboard history. Some of her biggest singles have spent 128 weeks on the charts, and in terms of No. 1  singles, she’s second only to The Beatles (that means she outranks Elvis Presley). So the answer is probably “yes.”

Not content with regularly topping the Billboard charts, Carey joined the cultural phenomenon known as “American Idol” as a judge in 2012. Upon announcing the gig, she tweeted, “As a singer-songwriter, I’m excited to help find and nurture new talent.”

New talent wasn’t all she’d be nurturing. For just one year on the show, Mariah’s bank account “nurtured” a cool $18 million, making her the most well-paid judge on TV. At the time MC’s record-setting payday was announced, fellow “Idol” judge Jennifer Lopez was holding out for a $12 million salary.

Her Residency in Las Vegas Was a Huge Deal

Fast forward to 2015 and you’ll find Carey setting out to conquer Vegas. In January of that year, the songstress took to “The Ellen DeGeneres Show” and announced a residency deal to headline the Colosseum at Caesars Palace, where she’d belt out all 18 (yes, 18) of her No. 1 hits in each concert.

Of course, she didn’t dish with DeGeneres about her salary. Though the exact figures of Carey’s Vegas payday  weren’t release — even after her departure in late 2016 — we do know she was expected to top Britney Spears’ residency $30 million earnings — and several other major stars on stage in Vegas.

A Few (Dubious) Songs Will Cost You Millions

On the first day of 2017, Carey proved that there is such a thing as bad publicity after all. When her highly publicized New Year’s Eve concert hit Times Square, she struggled with high notes and handled some onstage technical difficulties in a not-so-graceful fashion. At the end of the day, The New York Times called it “a performance train wreck.”

Before the glitter hit the fan, though, the world got a little insight into how much money these sorts of mini concerts put into Carey’s checking account. Though exact numbers for her NYE debacle in NYC haven’t been disclosed, TMZ reported that she made $2 million to $5 million for a one-off New Year’s performance in Copacabana the previous year. And for a holiday show in Toronto, she made $1 million for performing two songs. That’s $500,000 for “Here Comes Santa Claus” and $500,000 for “All I Want for Christmas Is You.” So, yes, that means Mariah Carey songs are technically worth half a mil each.

She Once Had a Multi-Billion Dollar Empire

From the summer of 2015 to the fall of 2016, Carey didn’t just create a romance with Crown Resorts billionaire James Packer — she created a financial empire. At the time, Packer was the seventh wealthiest person in Australia. Coincidentally, Carey was the seventh richest recording artist in the world.

What happens when two (very) lucky sevens combine? Combining Carey’s net worth with Packer’s resulted in an estimated value of 8 billion Australian dollars, or about $6.04 billion in U.S. money. Quite the upgrade from the $570 million net worth Mariah shared with ex-husband Nick Cannon.

The two might not have belonged together, but the future remains bright — Carey guest-starred on “Empire” in late 2016, released a new single “I Don’t” on Feb. 3, and lent her voice to “The LEGO Batman Movie” that same month (which made $262.2 million in 30 days). Maybe “Love Takes Time,” but Carey doesn’t take that much time at all to bounce back.

Read More: Biggest Hits (and Flops) of Celebrities Who Dabbled in Music 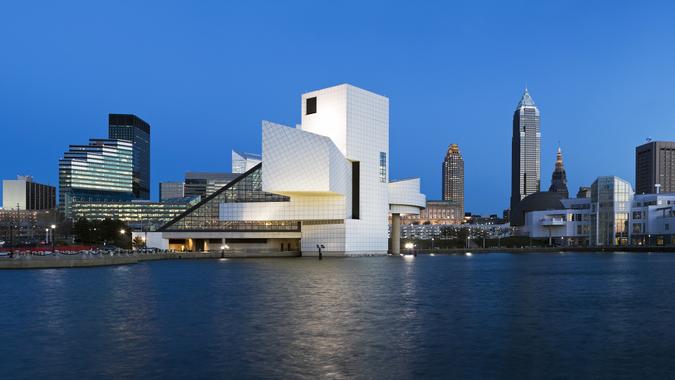 The Wealth Behind the 2017 Rock & Roll Hall of Fame Inductees

These Rock & Roll Hall of Fame Inductees didn't make music for the money, but they're not complaining that money came with their success.