How Rich is Rachel Brosnahan? 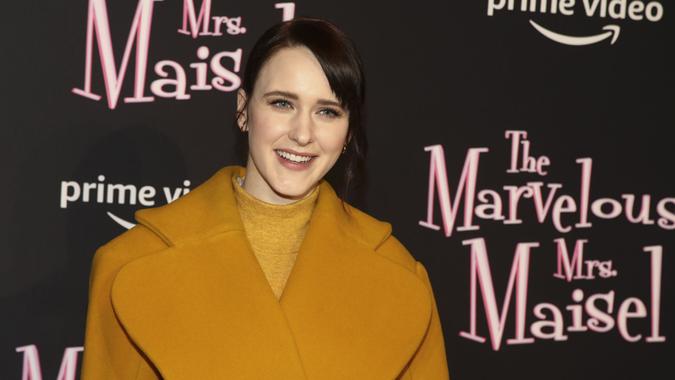 Rachel Brosnahan, 31, is about to return as the stylish housewife-turned-stand-up-comedian in season four of Amazon Prime’s “The Marvelous Mrs. Maisel.” The last season left our heroine with no money, no job and at risk of losing her home, but fans of the show will tune in this weekend to see how Midge will bounce back.

“The Marvelous Mrs. Maisel” premiered in 2017 and was an immediate critical and commercial success.  The show went on to win many awards for creator Amy Sherman-Palladino of “Gilmore Girls” fame. Brosnahan herself won the Primetime Emmy Award for Outstanding Lead Actress in a Comedy Series and the Golden Globe in 2018 and 2019 for her stunning portrayal of Miriam “Midge” Maisel.

Brosnahan’s star-making turn in “The Marvelous Mrs. Maisel” now pays her a hefty $300,000 per episode, bringing her estimated net worth to $15 million, according to CelebrityNetWorth. She received $100,000 per episode for her performances in the first and second seasons.

She first made a name for herself as a recurring character in the Netflix series “House of Cards.” She has also appeared in “Gossip Girl” and “Orange Is the New Black.”

She has appeared in many films including “The Unborn,” “Beautiful Creatures,” “Louder Than Bombs,” “The Finest Hours,” “Patriots Day” and “The Courier.”

Discover: How Rich is Snoop Dogg?

Rachel Elizabeth Brosnahan was born to Carol and Earl Brosnahan in Milwaukee, Wisconsin, on July 12, 1990. While she is known for playing a Jewish woman, she is not of Jewish descent.  She is the niece of the late Kate Spade, who was known for her designer handbags.

Brosnahan participated in musical theater when she was in junior high and high school and took acting classes at Wilmette’s Actor’s Training Center. In 2012, she graduated from NYU’s Tisch School of the Arts.

In 2009, she appeared at the Steppenwolf Theater in the play “Up.” That same year, she landed her first film role in “The Unborn.”  Small roles in television shows such as “Gossip Girl,” “Grey’s Anatomy,” “The Good Wife” and “In Treatment” followed.

Brosnahan then had recurring roles in TV series “The Blacklist” and “Black Box.”

In 2013, she landed the recurring role of Rachel Posner in “House of Cards.” The role lasted for multiple seasons and landed her a Primetime Emmy nomination for Outstanding Guest Actress in a Drama Series.

She joined the Amazon Prime family in 2016, when she appeared in Woody Allen’s Amazon series “Crisis in Six Scenes.”

Brosnahan keeps the details of her personal life as private as possible. She is married to actor Jason Ralph. The pair were wed before 2018 but have not revealed the actual date or details to the public.

The pair own an apartment in New York City, which has some decorative elements that Midge would love.

Rachel Brosnahan can be seen in “The Marvelous Mrs. Maisel” on Amazon Prime. Season four of the series returns on Feb. 18, 2022.