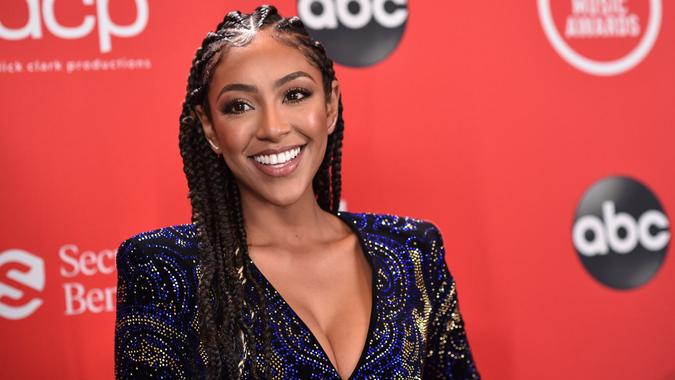 Michelle Young makes her debut Oct. 19 as the lead of “The Bachelorette,” and by the time the season finale airs, the Minnesota elementary school teacher could have a big, expensive rock on her finger and a new fiancé. But even if she doesn’t find lasting love, Young could see her bank balance balloon.

That is if she follows the past of recent bachelorettes, who have landed new jobs, endorsements and more after their turns as “The Bachelorette.” Among those to have cashed in on reality television fame are Kaitlyn Bristowe and Tayshia Adams, the co-hosts of Young’s season of the ABC franchise.

While Bristowe and Adams’ exact net worths aren’t known, each is worth at least seven figures.

Read on to learn how Bristowe and Adams’ wealth compares to other contestants as the franchise approaches its 20th anniversary.

How Much? 35 Reality Stars You Didn’t Know Are Extremely Wealthy

Before she competed on season 19 of “The Bachelor” in 2015, Bristowe was a dance instructor and spin teacher at home in Canada. In her star turn on Season 11 of “The Bachelorette,” she got engaged to Shawn Booth. They broke up three years later, and she now is engaged to Jason Tartick, who vied for the heart of Becca Kufrin in 2018.

Since starring on “The Bachelorette,” Bristowe won “Dancing With the Stars” with pro partner Artem Chigvintsev. She hosts the “Off the Vine” podcast, and owns the Dew Edit line of hair accessories and the Spade and Sparrows Wine label. While there is no definitive source of her net worth, Cosmopolitan estimates it at $3.5 million.

Worth a Lot: 15 Highest-Grossing Actors of All Time

Today, Adams is engaged to Zac Clark, who received her final rose on “The Bachelorette,” but she said in August 2021 that they are in no hurry to get married. She worked as a phlebotomist before reality TV but is no longer in the industry. She hosts a podcast, “Click Bait With Bachelor Nation,” which discusses the show and pop culture and has said she’d like to go into real estate, architecture or interior design. She also makes money as an influencer, spreading messages for car company Hyundai and hair-products manufacturer Conair. As with Bristowe, there’s no exact net worth available for Adams, but several media outlets pegged it at more than $1 million and perhaps as much as $5 million.

Canadian Jillian Harris was one of the earliest leads of “The Bachelorette,” starring in the fifth season in 2009, and she has been in the public eye since. She runs Jillan Harris Design, is an author and is the co-founder of The Jilly Box, a quarterly subscription box. She also served as co-host of “Love It Or List It Vancouver,” where she redesigned homes in an attempt to get the owners to stay in their homes instead of selling them, and as a designer on “Extreme Makeover: Home Edition.”

On “The Bachelorette,” she got engaged to Chicago businessman Ed Swiderski, but the relationship ended a year later. Since 2016, she’s been engaged to Justin Pasutto, and they have a young son and daughter. Harris has a net worth of $3 million, according to Celebrity Net Worth.

It Can Take Time: Samuel L. Jackson and 34 Other Celebrities Who Got Rich and Famous Later in Life

Actor Charlie O’Connell took the title of “The Bachelor” in 2005. The younger brother of actor Jerry O’Connell, his film credits include “Cruel Intentions,” “Crossing Jordan” and “Dude, Where’s My Car.” Celebrity Net Worth lists his net worth at $600,000.

O’Connell’s season of “The Bachelor” didn’t end with a proposal but rather with an agreement to continue dating his choice, Sarah Brice. They dated for five years. In 2018, he married model Anna Sophia Berglund.

Bob Guiney vied for the heart of Trista Rehn, the first bachelorette, in 2003. And while she didn’t fall in love with him — she chose Ryan Sutter, whom she married later that year — America did. Guiney starred in season 4 of “The Bachelor” and proposed to Estella Gardinier, but they never made it down the aisle. Instead, he wed actress Rebecca Budig in 2004. They divorced five years later. Guiney’s been married to Jessica Canyon since 2016, they are the parents of two young boys.

Guiney has a net worth of $1.5 million, per Celebrity Net Worth. Through the years, he had made several television appearances, contributing to the “Today” show, hosting reality dating show “Single and Hungry” on YouTube and “GSN Live.” He also is an author, co-founder of a mortgage company and part of charity cover band — Band From TV — which features actors Greg Gunberg and James Denton.