How Rich Is Taylor Swift As She Accepts Honorary NYU Doctorate? 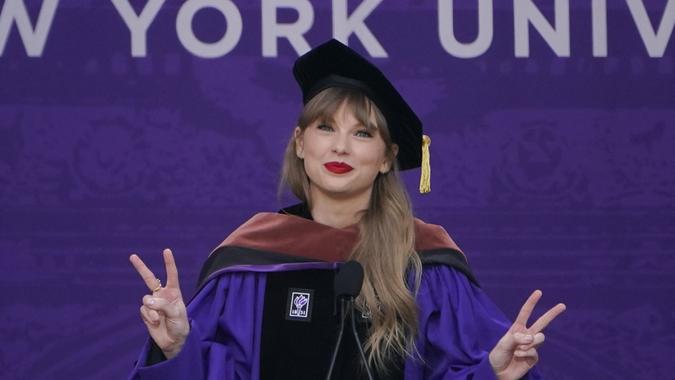 Taylor Swift (age 32), is an American singer, songwriter and actor who just received an honorary doctorate in fine arts from NYU. Her recent album “Red (Taylor’s Version)” was released last year, featured 30 tracks and was a critical and commercial triumph.

Discover: 22 Side Gigs That Can Make You Richer Than a Full-Time Job
More: 15 Cheap, Beautiful Places To Retire

Swift is one of the best-selling musicians ever, having sold more than 200 million albums. Over her 16-year career, she has reached No. 1 on the Billboard chart eight times and has won 11 Grammy Awards among 41 nominations. Her concert tours are some of the most successful of all time.

Some of her hits include: “We Are Never Ever Getting Back Together,” “Shake It Off,” “Bad Blood,” and “Look What You Made Me Do.”

She also has tried her hand at acting, appearing in her music videos as well as television shows and feature films.

With all of her endeavors and extensive touring, Swift has an estimated net worth of $400 million, according to Celebrity Net Worth. During some of her touring years, she has reportedly earned more than $150 million per year.

Over her career, Swift has enjoyed endorsement deals with many companies including CoverGirl, AT&T, Coca-Cola, Keds, Sony Electronics and Target.

Taylor Alison Swift was born to Scott and Andrea Swift in West Reading, Pennsylvania, on Dec. 13, 1989.  She was named after singer-songwriter James Taylor. Her interest in music began at an early age, so she enrolled in singing and acting classes in New York City and started performing at local venues and festivals. When she was 14, her family moved to Nashville so she could pursue a career in music.

A year later, the future star was performing at the Bluebird Café in Nashville and caught the eye of DreamWorks Records executive Scott Borchetta. He quickly signed Swift to his new venture, Big Machine Records. Her first six albums, released from 2006 to 2017, were on this label.

Swift has been linked to many men, but has never been married, nor has she had children. She is engaged to English actor Joe Alwyn whom she met in 2016.

She owns nearly an entire block of real estate in New York City’s Tribeca neighborhood, per The New York Post. She bought two adjoining penthouses in 2014 for $19.95 million. Four years later she bought the next floor down for $10 million. In 2017, she bought a neighboring townhouse for $18 million.

See: POLL: Do You Think People Should Invest In Crypto?
Find: 5 Times Taylor Swift and Other Iconic Artists Were Scammed Out of Royalties

She owns additional properties all over the world, including homes in Nashville, Los Angeles, Rhode Island and London — and her holdings are valued at over $80 million.

Taylor Swift impressed with her May 18 NYU speech, per CNN, and will certainly have some surprises in store for the future.

Jami Farkas contibuted to an earlier version of this article.