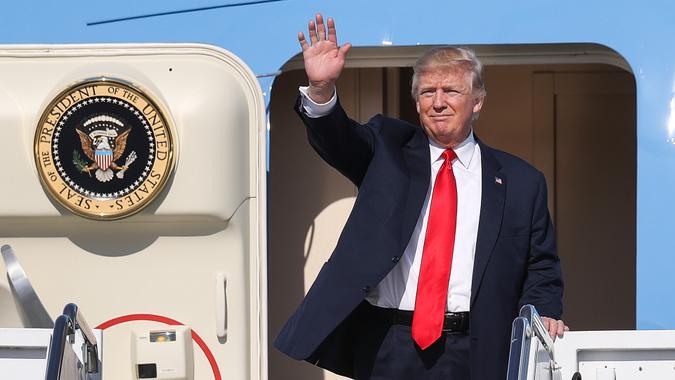 Former President Donald Trump isn’t shy about his business acumen or his vast riches — but how wealthy is he currently?

Since the pandemic began, he’s lost $600 million, according to Forbes. Those losses left him $400 million short of making the Forbes 400 list of America’s richest people for the first time in 25 years. Trump’s current net worth valuation from the publication stands at $2.5 billion.

See: All the Ways the Trumps Have Made Money Over the Past 20 Years
Find: Just How Rich Are Oprah, Bill Gates and Other Big Names?

In his first year in office, Trump’s wealth plummeted to $3.1 billion, and then declined to $2.5 billion in 2020. He lost an additional $700 million following the Capitol Hill riots and his impeachments, after several organizations stopped doing business with Trump or any of his properties.

Learn More: These 47 Billionaires Got Richer During The Pandemic

When he was sworn into his presidency, Donald Trump was the oldest person to be sworn in — he was 70 years, 220 days old on Jan. 20, 2017. (That title now belongs to President Joe Biden, who was 78 when he was sworn in). Trump beat out a number of contenders to become the Republican nominee for the 2016 presidential election. He went on to defeat Democratic nominee Hillary Clinton. His term ended on Jan. 20, when Biden began his term as the 46th president.

Trump’s earnings and title have since helped him develop more than 500 companies. The business mogul has his stake in luxury golf courses, skyscrapers, television shows, casinos, books, merchandise and more. These endeavors have helped him reach the estimated $2.4 billion that he’s worth today.