How Much Is George W. Bush Worth? 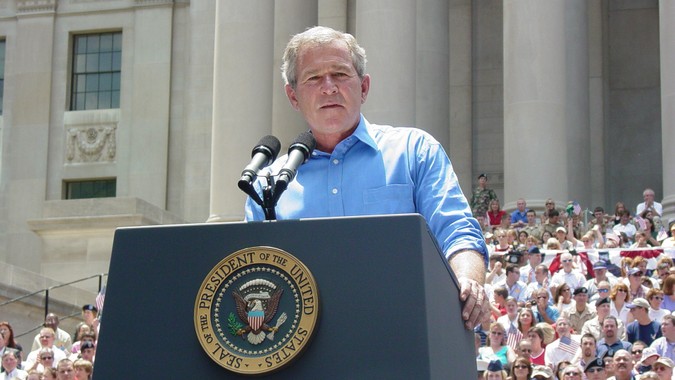 George W. Bush is worth $40 million. Although he is mostly known for being the president of the United States from 2001 to 2009, he made savvy business investments before his terms to help amass his fortune.

Bush was born on July 6, 1946, in Connecticut to Barbara Bush and George H.W. Bush. He attended Yale and studied history while also being a cheerleader and playing rugby. In 1968, Bush joined the Texas Air National Guard. He never participated in active combat and was honorably discharged for missing exams and drills. He was then accepted to Harvard Business School and earned his MBA, which no other president has ever earned.

In 1977, Bush met his wife, Laura, at a barbeque. The two were married later that same year. They would go on to have two daughters.

From Oil to Baseball: How Bush Made His Millions

Bush’s first major business venture was starting Arbusto Energy in 1977, an oil and gas exploration firm. In 1984, the company merged with oil company Spectrum 7. He was named chief executive and director in which he was paid $75,000 a year and held 1.1 million shares of the company. In 1986, Bush sold Spectrum 7 to Harken Energy, a large Dallas-based energy company mostly owned by billionaire George Soros.

The former president’s most profitable investment came when he and a group of investors purchased the Texas Rangers. Bush contributed $500,000 initially and sold his shares in 1998 for $15 million.

Bush’s Journey From Texas to the White House

Bush began his political career in 1978 when he ran for the House of Representatives in a Texas district. He lost the race with 46% of the vote. His father named him campaign advisor for his presidential reelection campaign in 1991.

In 1994, Bush ran for governor of Texas, which he won with 53% of the vote. In 2000, he was reelected as governor before he ran for president. He entered the presidency with a net worth of $20 million and served for two terms.

Net worth information was sourced from Celebrity Net Worth and is accurate as of Feb. 12, 2021.