How Much Was Madeleine Albright Worth Upon Her Death at Age 84? 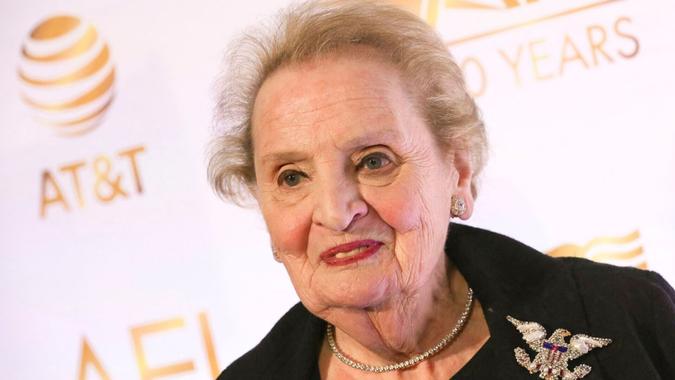 Madeleine Albright, American politician, educator and author who was the first female United States Secretary of State, died on March 23, 2022 at the age of 84 from cancer.

See: Colin Powell’s Fortune Includes a Legacy of Service and Patronage
Find: How Much is Volodymyr Zelenskyy Worth?

At the time of her death, Albright was estimated to be worth $10 Million, according to Celebrity Net Worth.

She helped pave the way for women in politics, most notably serving as secretary of state in 1997 under former President Bill Clinton. At the time, the historic appointment made her the highest-ranking woman in U.S. government.

After her tenure as secretary of state, Albright embarked on a writing and consulting career. In 2001, she started the international consulting firm the Albright Group. She also accepted positions on boards of directors for the New York Stock Exchange, Council for Foreign Relations and International Advisory Committee of the Brookings Doha Center.

She has published many books including “Madam Secretary,” “The Mighty and the Almighty: Reflections on America, God, and World Affairs,” “Read My Pins,” “Prague Winter: A Personal Story of Remembrance and War” and “Fascism: A Warning.”

In 2012, she received the Presidential Medal of Freedom from President Barack Obama.

Marie Jana Korbelová was the youngest of three children born on May 15, 1937 in Prague, Czechoslovakia to Josef and Anna Korbel. Her father was a diplomat. The family relocated to London and was there during the Blitz of World War II. It was at this time when her name was Anglicized. In 1948, the family emigrated to America where her father took a teaching position at University of Denver. She graduated from Wellesley College in 1957, just two years after she became an American citizen.

While in college, she met newspaperman Joseph Medill Patterson Albright, the grandson the founder of the New York Daily News. They were married in 1959 after she graduated.

Albright and her husband moved around a bit going from Chicago to New York City to Washington, DC. She studied international relations at Johns Hopkins University, before completing her education including an M.A. and Ph.D from Columbia University.

The couple regularly bounced back and forth between New York and Washington, D.C. In 1972, she worked on her first official campaign for the Sen. Ed Muskie (D-Maine). She then received her first White House post working in the National Security Council and became National Security Advisor under President Jimmy Carter.

She also served as an advior for foreign policy Sen. Walter Mondale in 1984, Gov. Michael Dukakis in 1988 and Clinton in 1992. She worked as a foreign policy adviser for Geraldine Ferraro, the first woman to run for vice president.

In 1980, she worked at the Smithsonian Institute, followed by a teaching stint for Eastern European Studies at Georgetown University. In 1992, she took a role with the National Security Council and became the U.S. Ambassador to the United Nations in 1993.

See: How Much Is Bill Clinton Worth?
Find: How Rich Is Former President Donald Trump?

In 1997, Albright became the 64th U.S. Secretary of State under President Bill Clinton.