How Rich Is Nancy Pelosi? 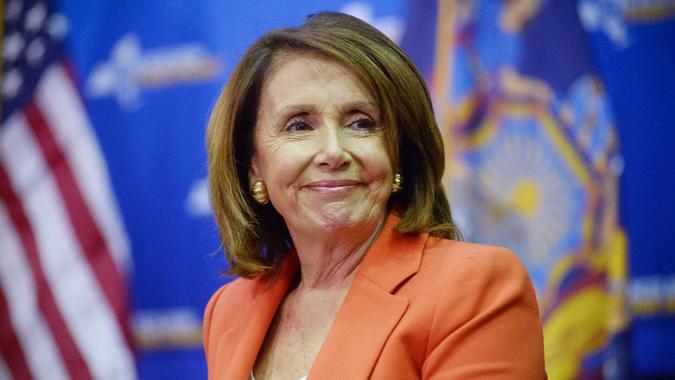 Nancy Pelosi has represented the San Francisco area in Congress since she was elected to the House of Representatives in 1987, and she rose up the ranks in Washington, D.C. In 2003, the Democratic caucus selected her to serve as minority leader, becoming the first woman to hold the position. She held the job for four years, until 2011, when she made history again as the first female speaker of the house. Since that job is held by a member of the chamber’s ruling party, she has served as speaker from 2007-11 and again from 2019 through the present. She was the minority leader from 2003-07 and 2011-19.

Pelosi wears a number of hats in Washington. She is the presiding officer and administrative head of the house, the leader of the majority party and still a representative of her home district. She also is second in line, after Vice President Kamala Harris, to succeed the president.

Here’s a closer look at the life and fortune of Nancy Pelosi. As the house speaker, she is the highest-paid member of Congress.

Find Out: How Rich Are Joe Biden, Donald Trump and All the Other Living US Presidents?

As the veteran congresswoman representing California’s 12th District, Pelosi is rooted in politics. The daughter of Baltimore’s former mayor and five-term Maryland congressman, Pelosi’s political ambitions began while she was an unpaid intern for a Democratic senator in 1962.

Still, despite decades as a civil servant, Pelosi’s net worth puts her at No. 6 on the list of richest members of Congress in 2020, according to the Center for Responsive Politics. While her salary is $223,500 annually, most of her wealth stems from her husband’s business and their investments.

Read More: AOC and 12 Other Political Figures Who Made Major Career Changes

The majority of Pelosi’s wealth is attributed to the success of her venture capitalist and real estate tycoon husband Paul Pelosi, whom she married in 1963. His firm, Financial Leasing Services, has a track record of wise investments in companies such as Facebook, Apple and the Walt Disney Co.

According to a July 2021 report by Pulitzer Prize-winning journalist Glenn Greenwald, the Pelosis traded more than $33 million of tech stocks in the past two years.

Among the couple’s shared properties are an estate in Northern California’s stunning wine country, a home in San Francisco and a condominium in Washington, D.C.