How Rich Are Queen Elizabeth and the Rest of the British Royal Family? 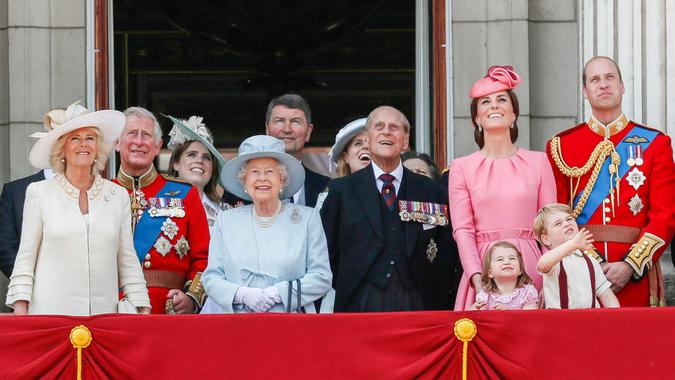 The world long has held a fascination with the British royals, the family led by Queen Elizabeth II. From the time the engagement of Prince Charles, the heir to the throne, to teenager Lady Diana Spencer was announced 40 years ago on Feb. 24, 1981, Diana became an object of that fascination.

The spotlight on Princess Diana remains illuminated more than 20 years after her death in a tragic car crash in 1997, thanks in part to the Netflix show “The Crown,” which chronicles the story of Britain’s first family. And it got even brighter on Nov. 5 with the release of “Spencer,” a biographical drama starring Kristen Stewart as Princess Diana.

Related: Here’s How the British Royal Family Spends Their Money
Read: Meghan Markle and More Americans Made Royal by Marriage

Take a closer look at how much the British royals are worth.

Married to Prince Charles since April 2005 — with reportedly no prenuptial agreement — Camilla Parker Bowles is formally known as Camilla, Duchess of Cornwall. Parker Bowles is said to be a kind, humble person who carries her own money.

She spends most of her time doing charity work dedicated to a variety of causes, including health and well-being, literacy promotion, helping the less fortunate, Cornwall-based charities, heritage and the arts, animal welfare, sexual assault and cancer.

Check Out: The Richest Royals in the World

Princess Beatrice has worked full time in business and contributes much of her time and efforts to a variety of causes. Her patronages have included the Berkshire Community Foundation, Broomwood African Education Foundation, English National Ballet School and the Forget Me Not Children’s Hospice. The eldest daughter of Prince Andrew, the Duke of York, and Sarah Ferguson, Princess Beatrice welcomed her first child, Sienna Elizabeth, with husband Edoardo Mapelli Mozzi in September.

Princess Eugenie tied the knot with Jack Brooksbank at St. George’s Chapel in Windsor Castle on Oct. 12, 2018. She gave birth to the couple’s first child, August Philip Hawke Brooksbank, in February. Brooksbank worked as an ambassador for Casamigos tequila, but in August, the Daily Mail reported he had taken a job at his father’s business, Pangaea Land And Property Limited.

Her estimated $10 million in wealth is rumored to be held in trust funds set up by her grandmother, Queen Elizabeth II, and her great-grandmother, the Queen Mother, as well as a trust set up by her divorced parents. Eugenie also has her own earnings. She holds degrees in art history and English literature and has worked in London as an associate director at an art gallery.

It’s only a fraction of the British royal family’s net worth, but Kate Middleton’s entrepreneurial family has an estimated fortune of $50 million thanks to their company, Party Pieces. Now the mother of Prince George, Princess Charlotte and Prince Louis, it’s unknown how much — if any — of her net worth comes from the Middleton family, but her grounded nature and enviable fashion sense have turned her into a beloved international superstar.

Prince Charles covers her staff, travel and official wardrobe expenses. Married to Prince William since 2011, the Duchess of Cambridge gives her time to many charitable causes, and she’s particularly interested in children’s issues.

Find Out: These Are the 12 Richest Princesses in the World

Philip Mountbatten married Princess Elizabeth in November 1947, five years before her coronation as Queen Elizabeth II. Due to long-established rules and regulations set by the monarchy, he never took on the title of king, but royalty was in his blood. Born Prince Philip of Greece and Denmark, his father was Prince Andrew of Greece and his mother was Princess Alice of Battenburg. He adopted the Mountbatten last name in 1947 when he renounced his royal titles and became a British subject.

A fourth cousin of his wife, Prince Philip served in the British Royal Navy from 1939 to 1953. Also an accomplished pilot, he earned his Royal Airforce Wings in 1953 and garnered more than 5,900 flight hours over a 44-year span. He died in April at age 99.

Prince William is the eldest son of Prince Charles and the late Princess Diana and second in line to the throne. A large portion of the future king’s net worth comes from a roughly $12.3 million inheritance, received from Diana’s estate on his 30th birthday in 2012.

Despite his British royal family net worth, Prince William worked as a helicopter pilot for East Anglian Air Ambulance. He donated his entire $62,000 annual salary to charity — the prince now works full time as a royal. He and his wife, Kate Middleton, also carry the titles of Duke and Duchess and Cambridge, and their official roles are increasing as William’s grandmother, Queen Elizabeth II, scales back her duties at age 95. They are the parents of three children, including 8-year-old Prince George, who follows his grandfather and father in succession to the throne.

Although Prince Harry and Meghan Markle no longer formally represent the Queen and will no longer use their official titles, family is still family. Markle joined the family when she tied the knot with Prince Harry in May 2018. The net worth of the former “Suits” actress has skyrocketed from an estimated $10 million in April to $60 million today. That can be attributed to numerous projects she and Prince Harry have in the works, including a $100 million production pact with Netflix and an $18 million podcast agreement with Spotify. Her children’s book, “The Bench,” was published earlier this year.

More: The Most Surprising Jobs Held by Royals

Now removed from official royal duties, Prince Harry retired from his 10-year British Army career in 2015. Prior to his departure from the service, he was a captain in the Army Air Corps with an approximate annual salary of $45,000.

His royal net worth saw a significant increase following his 30th birthday in September 2014, when he received an estimated $12.3 million inheritance from the estate of his late mother, Princess Diana. Now living in a $14.7 million estate in Montecito, California, Prince Harry has seen his wealth grow to an estimated $60 million, thanks to the lucrative deals he and Markle have signed for their Archewell Productions and Archewell Audio labels for Netflix and Spotify, respectively.

The next in line to the English throne, Prince Charles has an estimated net worth of $100 million. As the future king, he has access to the revenues of the Duchy of Cornwall, which pay the public, private and charitable costs of Charles and his children.

The Duchy of Cornwall was founded in which 1337 by King Edward III and includes more than 130,000 acres of land. There’s agricultural areas, residential and commercial properties and unspoiled lad, such as rivers and coastline. The Duchy works to manage the estate “in a way that is sustainable, financially viable and of meaningful value to the local community,” according to its website. Prince Charles takes an active role in overseeing the Duchy.

As monarch, she also holds nearly $28 billion in assets belonging to the Crown Estate, as well as Buckingham Palace, the Duchy of Lancaster, the Duchy of Cornwall, Kensington Palace and the Crown Estate Scotland. These assets are not hers to sell, though the royal family does receive 25% of the profits of the Crown Estate income, per Forbes. The rest goes to the British treasury. In the fiscal year ending March 31, 2020, for example. the Crown Estate took in more than $475 million in profits. The approximately $120 million designated for the royals paid official expenses, including travel, payroll, security and such, Forbes said.

Jennifer Taylor and Sean Dennison contributed to the reporting for this article.