Sean Spicer announced Friday, July 21, that he will be leaving the podium as press secretary under the Trump administration. According to the Washington Post, his resignation was the result of President Trump’s recent communications director appointment, a role he gave to New York financier Anthony Scaramucci. Though the president asked Spicer to remain on as press secretary, Spicer reportedly did not agree with Trump’s appointment and chose to resign. Later that day, White House Principle Deputy Press Secretary Sarah Huckabee Sanders was confirmed as Spicer’s replacement.

In the past, White House press secretaries have simply served as the voice of the executive branch, but Spicer himself has regularly been the focus of news stories. Thanks to Melissa McCarthy’s hugely popular depiction of him on “Saturday Night Live,” he’s even on the radar of those not interested in politics.

A relative unknown prior to the 2016 presidential campaign, Spicer’s rise to fame has been rocky, and the Trump administration has proven that change in the White House can come at the drop of a hat. While his future with the administration is unknown, here are the basics on Sean Spicer’s net worth, career and family life.

Sean Spicer on the Job Hunt: Here’s How Much He Could Make Outside the White House

He works for a billionaire, but Sean Spicer’s net worth is likely much more modest than his boss’s. The total value of his assets hasn’t been made public, but he earns a yearly salary of $176,461 for his work as the White House press secretary.

A 2017 public financial disclosure revealed that Spicer has holdings in several major corporations, including up to a $50,000 stake in Coca-Cola, Verizon and AT&T, as well as an up to $100,000 stake in McDonald’s.

Similar to President Trump, the disclosure exposed Spicer as somewhat of a real estate tycoon. He owns two residential properties in Rhode Island, with a combined value of up to $1.5 million. Spicer also owns a commercial property in Newport, R.I. worth up to $500,000, and two more in Madison, Ala., valued at up to $1 million.

Also a landlord, Spicer owns four investment rental properties in Alexandria, Va. Combined, the properties are worth an estimated $1.1 million to $2.3 million.

Find Out: How Much Trump’s White House Staff Makes

Prior to becoming the White House press secretary, Sean Spicer served as the communications director for the Republican National Committee since 2011 and chief strategist since 2015. During the George W. Bush administration, he was the assistant United States trade representative for media and public affairs. An equally important role, he also served as the White House Easter bunny on at least one occasion during George W. Bush’s presidency.

Spicer got his bachelor’s degree in government from Connecticut College in 1993. Nearly two decades later, he received his master’s degree in national security and strategic studies from the Naval War College in 2012.

When he’s not briefing reports in the West Wing, Sean Spicer stays busy being a husband and father. He’s been married to Rebecca Miller Spicer since November 2004. The couple resides in Alexandria, Va. with their two children.

No stranger to the White House herself, Spicer’s wife was the associate director of communications for President George W. Bush. She’s currently the senior vice president of communications and public affairs at the National Beer Wholesalers Association.

Spicer’s job puts him in the public eye during the workday, but much of his private life is kept under wraps. Very little has been revealed about his family and what he does in his time away from the White House.

Up Next: The Money Behind Donald Trump’s Cabinet and Advisors 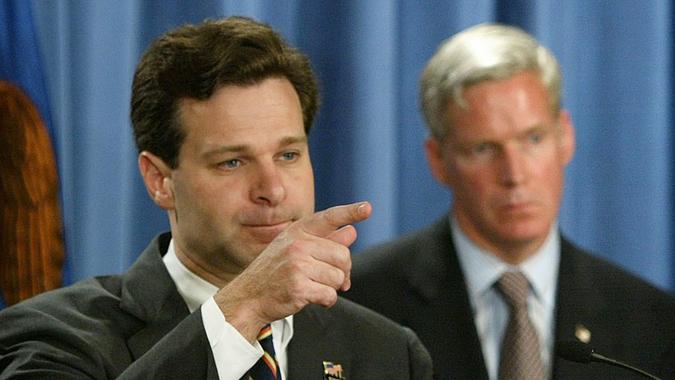 Move over, Comey. Christopher Wray is the new FBI director. Here's his wealth and career.