So far, many Americans are loving the proposed Donald Trump tax plan. If you have any money in the U.S. stock market, either in your 401k or investment account, you’re probably already richer due to the end of year Trump bull market, aka, the “Trump Bump.” With the Donald Trump tax plan yielding lower taxes for most, you can expect to find more take home pay in your wallet. Add in Trump’s infrastructure plans and your net worth could be poised for expansion.

On Jan. 20, 2017, Trump will be sworn in as the 45th president of the United States. Without even a peek at Donald Trump’s taxes, the unexpected president-elect proposes a slate of tax changes and economic plans that promise to catapult economic growth.

You can expect greater adjusted gross income on your 1040 when Trump’s tax plans go into effect. In September 2016, the Tax Foundation dissected Trump’s tax proposals and found them beneficial for most consumers and corporations. The plan, if approved by congress, will shrink the seven tax brackets into three, increase the standard deduction, and reduce marginal tax rates. The standard deduction will more than double for singles from $6,300 to $15,000 and increase from $12,600 to $30,000 for married couples filing jointly.

Deductions under the new plan will also be capped. “For those taxpayers who do itemize, the tax plan calls for capping itemized deductions at $200,000 for married-joint filers or $100,000 for single filers,” said Brien Leahy, MB Financial Bank Senior Vice President, Branch Banking.

Corporations will see tax cuts as well. The most notable Donald Trump tax plan impact for big businesses is the slashing of the corporate income tax rate from 35 to 15 percent. When businesses face lower tax rates, there’s more money left over to grow, expand and increase wages. Ultimately, this leads to more money in your pocket as well.

Another Trump idea analyzed in the Tax Foundation article proposes the “repatriation of currently deferred foreign profits, at a tax rate of 10 percent.” This enables companies earning money abroad a more economical way to bring that money back into the U.S. — one more stab at enhancing the American economy.

Ultimately, the Tax Foundation projects that the Trump tax reform proposals will cut businesses’ cost of capital and the marginal tax rate on labor. The result is projected to be a more robust economy and an increase in full-time jobs.

Optimistically, these tax reductions might fatten your wallet. With more take home pay and greater job opportunities, you could be doing well under Trump’s tax changes.

Like his Democratic competitor, Trump wants to beef up the infrastructure. A recent CNBC.com article by Jay Yarrow and Jeff Cox claims that Trump could be a massive force for good in the economy.

With fiscal policy slimming taxes and the government expanding grand infrastructure projects, there could be more money coming into the economy with brand new jobs. Add a Republican congress to a Republican president and citizens might be in for a bustling and growing economy that will pull the U.S. out of its recent slower growth mode.

“His economic plan projects 3.5 percent growth per year on average,” said Leahy. “For each 1 percent in added Gross Domestic Product growth, President-elect Trump’s economic advisors project that the economy will add 1.2 million jobs, for an increase of 25 million new jobs over the next decade.”

Stock market investors have benefitted from the bull market since Trump’s election on Nov. 8, 2016. The Dow Jones Industrial Average has flirted with the 20,000 mark repeatedly, but has yet to hit the milestone.

“As the new administration takes office, it’s a great opportunity for investors to review their portfolios and rebalance where necessary. Making sure your portfolio is diversified lets you sleep at night, knowing you are well positioned, regardless of how the market performs,” said Sally Sargent, MB Financial’s Senior Managing Director of Wealth Management.

How the Donald Trump Tax Plan Will Impact You

If Trump’s tax and economic initiatives pass congress, they have the potential to grow the economy, increase jobs and cut taxes. A recent Washington Post article posits that with more money in consumer’s pockets, the housing market might continue expanding. Yet, before you pull out the bubbly and celebrate the rosy economic forecast, the new administration must settle in and ramp up during the highly publicized first 100 days.

“This is a good time to review your savings needs and how you plan to meet those needs rather than a time to make changes to your personal financial strategies based on what policy changes might be enacted,” said Leahy.

While there is potentially a lot to be excited about financially, Congress must pass these proposals and the economic costs of Trump’s plans must be considered. 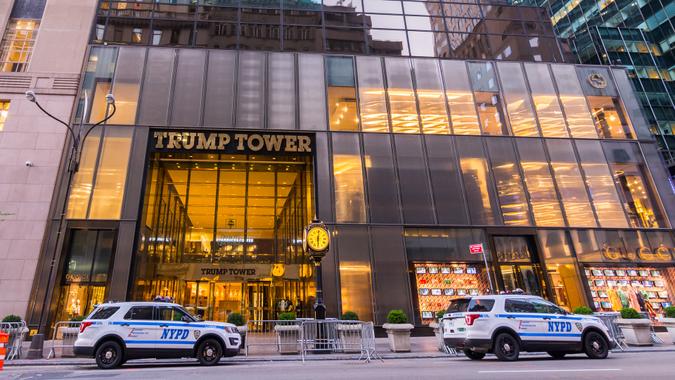 > Net Worth > Politicians > Taxes, Jobs and Investments: How Trump's Presidency Could Affect Your Wallet