How Much Do Jockeys Make? 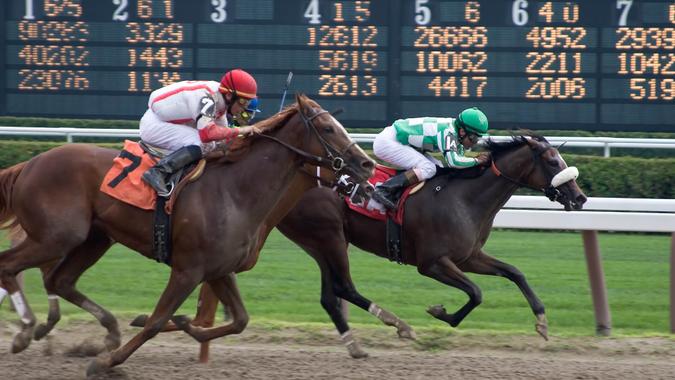 May and June are the highest-profile months for horse racing in the United States with the running of the Triple Crown races: the Kentucky Derby, Preakness Stakes and Belmont Stakes. Those marquee races are known for their rich purses — the 2021 Kentucky Derby’s purse was $3 million, with $1.86 million going to the winner, Medina Spirit — although months later, that is still under investigation due to the horse’s failed drug test.

Far less attention is given to the jockey, the person who travels the whole way with the horse. A winning jockey takes 10% of the horse’s purse at the Kentucky Derby, so $186,000 for this year‘s Derby winner, John Velazquez. From those winnings Velazquez likely paid a 25% fee to his agent and a 5% tip to the valet who helped him prepare his gear for the race, according to CNBC. That’s still a huge payday in a sport where an average year’s earning can be $30,000-$40,000, according to Career Trend — and as recently as 2018, paid half of North America’s 1,559 thoroughbred jockeys less than $12,000 per year, according to Thoroughbred Racing Commentary, based on horses’ prize winnings.

Jockeys are some of the original “gig workers” because they work as independent contractors. Rather than earn a salary, a jockey receives a “mounting fee” (often $50-$110) for each race, riding sometimes eight races per day.

The real money for jockeys comes from prize money, if they can ride a horse to finish first, second or third in a race and earn part of the purse. The percentages a jockey receives for a thoroughbred race range from 5% for a second- or third-place finish to 10% for first place, according to the Covington Reporter. In less competitive races, the jockey’s earnings can be as low as 0.5% for a third-place finish, 1% for placing second and perhaps 6%-10% for first place, Career Trend reported.

Like other gig workers, jockeys often have to pay for their own equipment, which might include saddles, helmets, vests, goggles, boots and whips.

In 2020, the average earnings of the top 100 jockeys in the United States was around $3.5 million, BloodHorse reported.