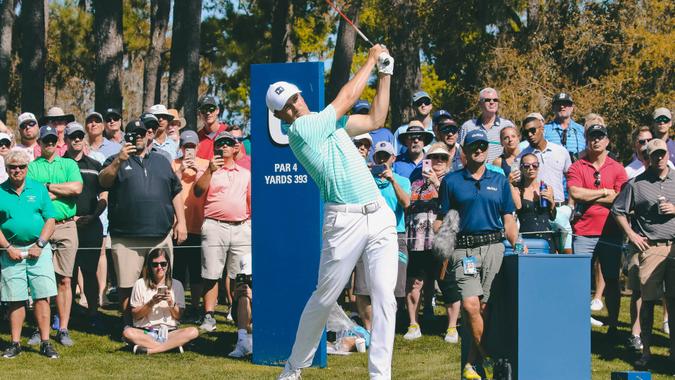 At 27 years old, championship golfer Jordan Spieth has acquired a net worth of $110 million, largely from endorsement deals and tournament winnings, according to CelebrityNetWorth.com.

Spieth won his first tournament in more than three years in his home state of Texas, breaking an 82-event losing drought at the Valero Open, part of the PGA Championship Tour.

He was once the world’s number one player, PGATour.com reports, but had been in danger of slipping off the Top 100 list if he didn’t secure a win soon. His victory at the Valero Open marked his 11th in five years on the PGA Tour.

The win puts Spieth one step closer to the records set by golf legends Tiger Woods, Phil Mickelson, Rory McIlroy and Justin Thomas, who all boast at least 12 PGA wins before the age of 28.

Spieth has been making headlines and collecting trophies in the sport of golf since he announced he’d be turning pro at the end of 2012.

After turning pro, Spieth won PGA Rookie of the Year and placed second at the Hyundai Tournament of Champions. Being the youngest person to win three of the four golf majors in two years certainly attracted international attention. And even Spieth’s 1,351-day losing drought didn’t dampen his drive. He’s back on the championship list after his Valero victory, with a net worth that’s reported as $110 million by CelebrityNetWorth.com.

The young golfer also reached #52 on Forbes’ list of highest paid athletes for 2020, earning $27.6 million per year according to Forbes. Spieth’s earnings from his victories on the golf course are impressive but where there’s prize money, sponsorship deals and endorsements follow.

In 2017, the golfer banked $24 million off the course, compared to the $6.4 million he made on the course, according to Golf Digest. The incredibly gifted athlete is also extremely marketable; Spieth has forged lucrative partnerships with top-tier companies like Under Armour, NetJets, Rolex, Titleist, AT&T, Perfect Sense, Coca-Cola and SuperStroke. Just a few years into his career, Spieth achieved the hallmark of sports greatness and joined the esteemed league of athletes to grace the cover of a Wheaties box.

Check Out: Arnold Palmer, Tiger Woods and 43 More of the Richest Golfers of All Time