Where Do Sean McVay and Zac Taylor Rank Among NFL Coach Salaries? 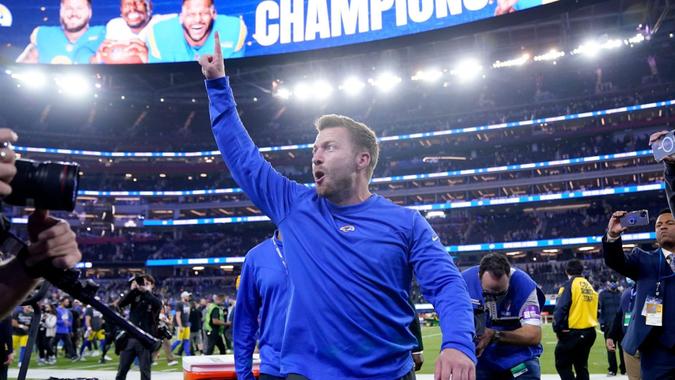 The old maxim about football says, “It’s not about the X’s and O’s; it’s the Jimmys and Joes.” In other words, success in the NFL is more predicated on having talented players than great coaching.

With that said, don’t overlook that coaching plays an important role. The two coaches in this year’s Super Bowl, Sean McVay of the Los Angeles Rams and Zac Taylor of the Cincinnati Bengals, certainly played an important part in leading their franchises to the biggest game of the season.

And both are paid handsomely for it.

Related: How Much Are the Owners of the Rams and Bengals Worth?
Also See: Who Are the Richest Quarterbacks in 2022?

McVay has been coach of the Rams for five seasons, reaching the Super Bowl for the second time. He has led the Rams to the playoffs in four of his five seasons, and at just 36 years old is considered one of the rising coaching stars in the NFL.

Taylor, 38, is in his third season as coach of the Bengals, turning the team around from a 4-11-1 season last year. By leading Cincinnati to its first playoff victory since 1990, Taylor also has cemented his reputation as a hot young coach.

Owning It: Jerry Jones, Robert Kraft and 23 More of the Richest NFL Owners

Where McVay and Taylor Rank

Neither is the highest-paid coach in the NFL, however. Not even close. Take a look at some of the coaches with the highest salaries and see where McVay and Taylor rank.

Salary information is taken from reports from NBC Sports Boston and Sportico, so there’s a salary range for some.

Taylor, meanwhile, comes in at 17th on the NBC Sports ranking of coaches’ salaries.

McVay and Taylor are both hoping to follow in the footsteps of Tampa Bay Buccaneers coach Bruce Arians, who earned a pay raise after winning Super Bowl LV.