How Much Is Stephen Curry Worth? 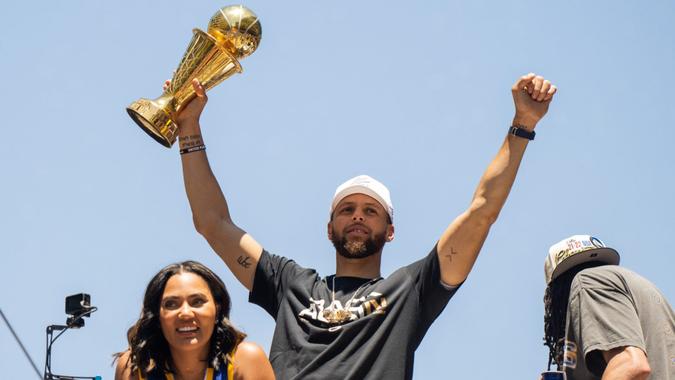 When he’s not tearing up the court with the Golden State Warriors, basketball superstar Stephen Curry is making waves in both the sponsorship and media industries.

Find Out: Can I Draw Social Security At 62 and Still Work Full Time?
Also: 7 Things You Should Never Do When Planning for Retirement

Thanks to his efforts, Celebrity Net Worth estimates Curry is worth a cool $160 million.

Curry has proved his value on the court, which is why he was able to earn the NBA’s highest-paid salary ever in the 2016-17 season. Currently, he is in the first year of a four-year, $215 million contract.

Curry’s career in basketball wasn’t a foregone conclusion. In fact, he was barely recruited during college. It wasn’t until he averaged 28.6 points per game as a college junior that NBA teams started to notice him. He was drafted by the Golden State Warriors in 2009 and almost nabbed the Rookie of the Year award in 2010.

Curry made his first of eight All-Star teams in 2014 and led his team to the NBA championships in 2015, where he and the Warriors beat LeBron James. Since then, he’s won three more championships and was the league MVP in 2015 and 2016.

As one of the biggest players in the game, it’s no surprise that Curry has racked up partnerships with big-name brands that include 2K Sports, Callaway Golf, FTX, Google and Under Armour. Curry was No. 5 on Forbes’ 2022 list of the world’s richest athletes, with earnings on the year of $92.8 million, and more than half of that came from endorsements.

Curry puts all of his earnings to good use. He signed an endorsement deal with Callaway in 2019, and as part of the deal, he donated a seven-figure amount to create a golf program at Howard University. He also founded the Stephen Curry Foundation, which raises money for schools.

George Malone and Jami Farkas contributed to the reporting for this article.