Survey: 75% of Retirees Are Not Leaving a Nest Egg, Would Rather Spend Golden Years ‘Living It Up’ 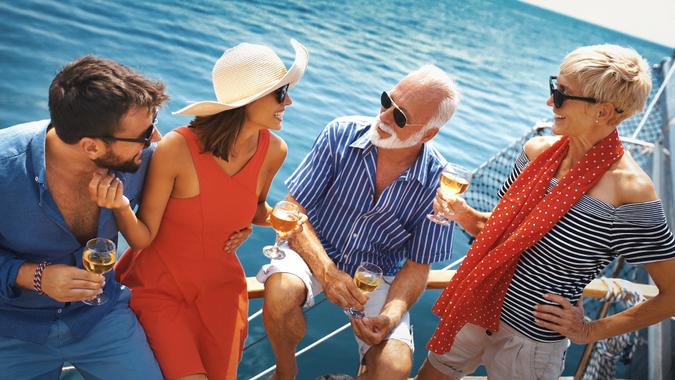 COVID-19 caused more baby boomers to retire in 2020 than in any other year, and while traditionally retirees make more frugal spending decisions to leave a financial legacy for their family, this generation is ready to spend their days living it up, according to a new survey.

Explore: Jaw-Dropping Stats About the State of Retirement in America
Discover: Social Security Benefits Might Get Cut Early — What Does It Mean for You?

According to a recent survey from Coventry, more than 75% of over 1,500 respondents are ditching the idea of leaving a nest egg for their family and plan to spend the remainder of their lifetime — and money — making memories, citing a dramatic shift in prioritization from material things to experiences.

Peter Hershon, SVP of Account Services at Coventry, told GOBankingRates that the challenges of COVID-19 put into perspective what is most important to baby boomers. “During the pandemic, seniors were at the highest health risk, more likely to be socially isolated and may have missed out on quality time with loved ones,” he stated. “Looking ahead, boomers are less focused on leaving a financial inheritance for the next generation — and would rather ensure their legacy by making priceless memories with those loved ones today.”

The survey notes that, hamstrung by the pandemic, baby boomers are feeling ready to break out of the house and live large following a year or more unable to travel, see loved ones and cross life experiences off their proverbial bucket lists. Indeed, the survey finds that when this age group was asked about the most important areas of their life to explore and deepen before they die, they prioritized family (41%) and travel (25%). This significantly outpaced learning (10%), hobbies (8%), romantic relationships (6%), philanthropic impact (6%) and careers (4%).

When asked if they were clocking out permanently, 55% of baby boomers said that they are not considering an encore career tied to an interest or passion. In addition, most of them weren’t interested in working past age 65 to fund a richer lifestyle in retirement, as 79% said they would rather live modestly versus working until 75 and having a more luxurious retirement, according to the findings.

Hershon found those results to be particularly interesting, as a lot has been written about baby boomers taking a different approach to retirement than previous generations, including working longer or in a different capacity. “While it’s understandable that boomers would like to retire in full by age 65, it is not without its challenges,” he explained. “Boomers are facing a myriad of obstacles that increase their risk of outliving their savings — from low interest rates to rising healthcare costs. The key is ensuring that they have enough income that can stretch for a longer period of time.”

Indeed, the survey notes that for 33% of baby boomers, the biggest factor holding them back from crossing off items on their bucket list is a lack of money. In addition, 18% have no form of retirement income at all, while most are funding this chapter through their 401(K) plans (26%), pension (21%) or savings (25%).

More: Here’s Exactly How Much Savings You Need To Retire In Your State

But there are other forms of retirement income that seniors may not be considering.

“Each year we see seniors allow $100 billion in life insurance policies lapse, not realizing that their policy is an asset they own, which can be sold on the secondary market,” Hershon said. “In some cases, these policies end up being one of the largest single assets they own. Over the years of life and circumstance changes, the original rationale for taking out a life insurance policy may no longer exist. Even term insurance about to expire can become ‘found money’ — allowing seniors to fund enriching experiences to elevate their golden years,” he added.

For example: by claiming Social Security too early before your full retirement age (FRA), “you lock in a lower monthly check from Uncle Sam, missing out on the retirement income you earned throughout your career. If you are healthy and able to wait until your FRA, it can mean more substantial earnings for as long as you live,” according to the survey.

Compare: How Much Can the Average Senior Citizen Expect To Benefit From Social Security?

Many retirees don’t realize that their house is a key asset in their investment portfolio, as well. “According to Pew Research, nearly eight in 10 Americans 65 or older own a home. Yet, whether Airbnbing out your second home, adding a rental suite, or capitalizing on the current spike in homeownership demands to fund your retirement,” the survey noted.

Finally, when it comes to expertise, while many seniors don’t want to be working full time anymore, COVID-19 has created the opportunity for seniors to freelance part-time during their golden years in many fields. “Those who have built strong expertise in their chosen field may be able to charge a premium for minimal hours of work,” according to the survey.

Interestingly, the shift in priorities seems to be across the socio-economic board: even millionaires are reconsidering leaving their savings.