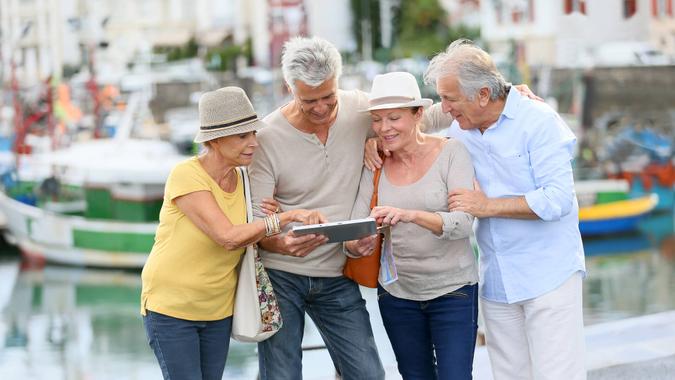 Although retirement age by the government’s standards falls somewhere in your mid-60s, some people will opt to retire earlier or later in life. And over the past couple of years, the pandemic has had much to do with some people’s decisions to retire sooner rather than later. “So if we look at the population ages 65 to 74, the share that are employed in the last three months of 2021 is 7% lower relative to the share that was employed in the last three months of 2019, said Wellesley economist Courtney Coile in a February 23 interview with PBS News Hour.

Find Out: The Average Social Security Check the Year You Were Born
Learn More: Jaw-Dropping Stats About the State of Retirement in America

For example, right now, there are more people planning to retire early than there were pre-pandemic, according to a survey from market research firm Hearts and Wallets, as reported by Fox News. The survey estimates around 11 million U.S. households younger than 55 have plans to retire by 55. However, approximately 40 million households under 55 believe they will work longer and retire between the ages of 62 and 70 — more than 3.5 times the amount of households that believe they will retire in their mid-50s.

In 2034, the Social Security Administration will run out of the excess reserves it has to fully fund Americans in retirement. When that happens, there will only be enough money to fund 78% of retirees’ full benefits. To fix the funding issue, Congress can either cut retirees’ benefits or increase tax revenue to make up the shortfall. You might want to plan for reduced benefits if you are planning to retire in 2034 or later.

Americans carried an average debt of $23,325 in 2021, down from an average of $29,800 in 2019, according to Northwestern Mutual’s “Planning & Progress Study 2020.” Debt can severely impact your retirement plans both because it can be a drain on your finances and it can harm your credit. When planning for retirement, give yourself limitations on what you need versus what you want. Also plan on taking steps to eliminate any debt you accrue before retirement. For older folks, that usually means mortgage debt.

Healthcare costs generally rise with age, which means you might want to consider healthy living as part of your retirement plan. Healthcare costs themselves are rising. Employer-sponsored premiums for single coverage jumped to  $7,739 in 2021 — an increase of 4% from the year before. Because this trend shows no sign of abating, you’ll want to factor it in to your retirement plans.

Sometimes it’s worth holding off on retirement for the simple fact that you love your job. Although retirement can provide reprieve from a demanding work life, for others their job is a source of happiness, contentedness or just soothing familiarity. And right now job satisfaction is at 60%, which is the highest it’s been in a decade, according to a 2022 research report from The Conference Board. The recovering labor market and scaled-back COVID-19 worries are thought to be contributors to the increased level of job satisfaction.

Obviously, your savings will play a huge role in whether you can fulfill your retirement goals. According to a recent online survey, commissioned by Clever Real Estate in November 2021, the average retiree only has $191,659 in retirement savings, which is just 37% of the recommended savings amount. Perhaps this is why 51% of retirees believe they’ll outlive their savings.

A 401k is an employer-sponsored retirement plan with a much higher contribution limit: $20,500, including the total of all employer contributions, employee elective deferrals. However, these are also taxable as income.

You’ll need to be realistic about where you can retire. Some places will be a huge drain on your savings, thus affecting your standard of living. On the other hand, you can really stretch a dollar in, say, Edgewater, Florida.

Maintaining a standard of living during retirement is itself fairly expensive, but your nest egg will probably stretch further in Alabama than Alaska. According to a GOBankingRates study, you won’t have to have nearly as much money to retire in Southeastern and Southwestern states: Mississippi, Oklahoma and Arkansas require less than $600,000 in savings to retire. However, to retire in the most expensive places, you’ll need much more. For example, in Hawaii, you’ll need over $1.75 million in savings, and in California and New York, you’ll need to have around $1.25 to $1.3 million put away. The bottom line is if you want your savings to last longer after you stop working, your retirement destination matters.

Sean Dennison and Cynthia Measom contributed to the reporting for this article.