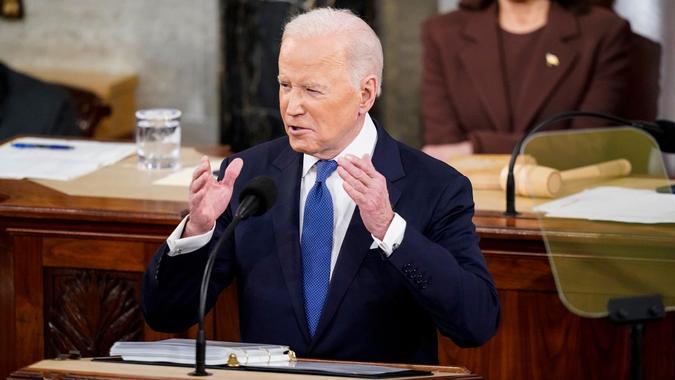 President Joe Biden had a lot on his plate during his State of the Union speech this week — the Russian invasion of Ukraine, COVID-19 and inflation chief among them — so his brief mention of Medicare changes largely went unnoticed. But it could have big implications for older Americans who depend on Medicare for health care in retirement.

Social Security Schedule: When First COLA Checks Will Arrive in March 2022
Find: Best Cities To Retire on a Budget of $1,500 a Month

During the speech, Biden said Medicare should be able to negotiate for lower prices of prescription drugs, Barron’s reported. Doing so could give Medicare more leverage against Big Pharma companies, help the program land better deals and lower drug costs for retirees.

As an example, Biden pointed to insulin and Type 1 diabetes. Insulin costs $10 to make per vial, he noted, but drug companies charge individuals up to 30 times that price. Biden framed much of the discussion around the medical needs of younger people, but the larger message — how drug companies often charge exorbitant prices — also resonated with many seniors.

“Drug companies will still do very well,” Biden said. “And while we’re at it, let Medicare negotiate lower prices for prescription drugs, like the VA already does.”

As Barron’s noted, it wasn’t the first time someone proposed letting Medicare negotiate drug prices — but it might have been the first time the idea was ever mentioned in a State of the Union address.

“We applaud him for mentioning Big Pharma in the State of the Union speech,” Max Richtman, president of the National Committee to Preserve Social Security and Medicare, told Barron’s.

Related: Medical Expenses You Can Deduct From Your Taxes

Health-care costs are among the biggest financial worries for seniors, and with good reason. The average couple can expect to spend about $300,000 on healthcare costs alone during their retirements, and that doesn’t even include long-term care they might need at some point. Many Americans don’t have enough retirement savings or Social Security income to cover those costs.

Meanwhile, costs keep going up. Medicare Part B premiums are scheduled to rise 14.5% in 2022, though there has been talk that the hike could be lowered after the price of Aduhelm, a leading Alzheimer’s drug made by Biogen, was reduced.

And because of inflation in other areas, some seniors have been forced to choose between buying groceries or buying needed medication.

Giving Medicare the ability to negotiate better deals with drug makers — and pass those savings on to Medicare recipients — could provide much-needed financial relief to retirees.

Biden will need bipartisan support from Congress to pass any bill governing Medicare. Although that’s no sure thing, it helps that senior voters and advocacy groups have considerable sway in the nation’s capital.

“Every member of Congress — Democrat, Republican or independent — has many seniors on Medicare, and I have done hundreds of town hall meetings with members of Congress over the years,” Richtman said. “The price of prescription drugs is top of everyone’s list.”