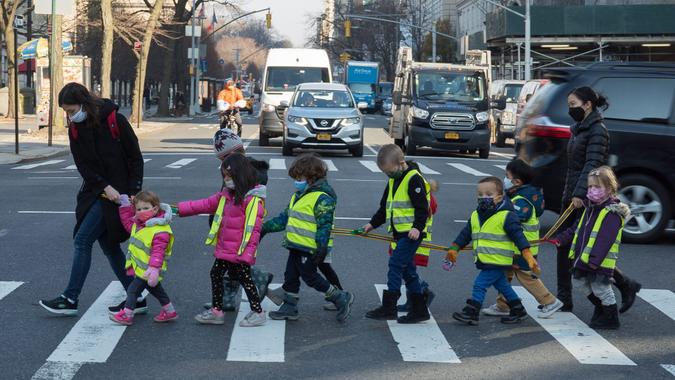 A pilot program in New York City to fund college plans for students in the hopes of closing the racial wealth gap is expanding citywide this fall.

See: 5 Things Most Americans Don’t Know About Social Security
Find: Stimulus Update: States Give Out Thousands of Bonus $1,000 Checks – Will You Get One?

The expansion of the Save for College program, called “Baby Bonds,” is led by non-profit NYC Kids Rise. It’s a scholarship and savings program designed to make college and career training more accessible for all NYC public school students regardless of family income or immigration status, according to its website.

Through the program, unless their parent or guardian opts out, every kindergarten student enrolled in a New York City public school automatically receives an NYC Scholarship Account. This account is invested in a 529 plan with a $100 initial deposit from NYC Kids RISE. Families can also open and connect their own college savings account through the online platform.

“For New York to come back stronger than before the pandemic, we must address the widening wealth gap that holds so many kids back from opportunities,” Mayor Bill de Blasio said last week, speaking at an event announcing the program’s expansion. “This historic investment in our children’s futures will pay dividends for generations to come, helping us build a just recovery for all.”

According to NYC Kids Rise, research shows that children with even a small savings account of $1 to $500 are three times more likely to enroll in college and more than four times more likely to graduate, and children who attend college earn a significantly higher salary over their lifetimes and are less likely to be unemployed.

“@NYCKidsRISE is going city-wide! Starting this year, ALL @nycschools kindergarten students will automatically receive an NYC Scholarship Account, regardless of family income or immigration status,” the not-for-profit tweeted last week.

The program, started in 2017 in School District 30 in Queens, will reach roughly 70,000 kindergarteners citywide, up from over 13,000 students already participating in the program across School District 30 which represent 95% of all eligible kindergarten, first-, second, and third-graders, according to a statement from the mayor’s office.

The expansion of the program, “which NYC Kids RISE launched in partnership with the Department of Education (DOE) and the City with funding support from the Gray Foundation in 2017, signifies an investment in the financial and social resiliency of NYC’s families and neighborhoods, and it provides a new way to drive financial assets towards communities that have been systematically excluded from wealth-building opportunities,” according to the statement.