You know you need to save for retirement. But you also know that you need to have a stash of cash for emergencies. However, numerous studies and surveys show that Americans aren’t doing a good job of saving for either.

In fact, GOBankingRates’ 2015 Life + Money survey found that planning for retirement and saving for an emergency are among the top financial challenges that Americans said they are facing.

Nearly 20 percent of the more than 10,000 U.S. adults surveyed by GOBankingRates said their biggest money challenge was retirement planning, while almost 13 percent ranked saving up an emergency fund as their top struggle.

If you’re struggling to find room in your budget to set aside money, here’s what you need to know about which to save for first: an emergency or retirement.

“As sure as the day is long, there will be emergencies,” said John Lindsey, a certified financial planner (CFP), founder and CEO of Lindsey & Lindsey. Yet, one in three adults in America has no emergency savings, according to a recent survey by NeighborWorks America, a nonprofit community development organization. That means their financial stability could be threatened by any unexpected expenses.

To cover major emergencies – such as a significant medical issue, long-term disability or the death of a household’s breadwinner – you need insurance. “Any one of these risks can single-handedly ruin the best financial plan,” said Rich Arzaga, a CFP and founder and CEO of Cornerstone Wealth Management. But you need a pool of money in addition to insurance for short-term emergencies or losses that aren’t covered by insurance, he said.

“People who do not maintain reserves run the risk of being forced to borrow or withdraw from their retirement funds to cover short-term needs,” Arzaga said. “Without insurance and a reserve strategy, retirement savings could be short-sighted and a moot point.”

If you tap a 401(k) for an emergency, you’ll pay income taxes on the amount you withdraw plus a 10 percent early withdrawal penalty if you’re younger than 59 ½. For those in the top income-tax bracket, taxes and penalties could consume 50 percent of the amount you withdraw — forcing you to pull out even more to cover your emergency and leaving you with even less for retirement.

You can’t rely on credit cards, either, to cover emergency expenses, Lindsey said. For starters, if you can’t afford to pay for an emergency with cash, how will you be able to pay your credit card bill? Yes, you can spread out payments over time. But interest will accrue, and you’ll end up paying significantly more than the original cost of the emergency, leaving you with less money to set aside for things such as retirement.

There’s another problem with relying on credit cards for rainy day expenses: As Lindsey points out, your line of credit might not be enough to cover the cost of an emergency.

“If you don’t save for an emergency, the resultant chaos could cause enough credit issues that it would take perhaps several years to be in a position to recover enough to save for retirement,” Lindsey said. That’s why the emergency fund has to take priority.

How Much You Need to Save for Emergencies

Lindsey recommends saving enough to cover six months’ worth of expenses in case of a job loss, maternity leave, or medical or other emergency. Given that the average length of unemployment is about 28 weeks, according to the Bureau of Labor Statistics, you might need even more than six months’ of expenses saved if your job is tenuous.

However, if you only manage to set aside three months’ worth of expenses, you’re still “miles ahead of most people,” Lindsey said. The key is to start somewhere and make saving a discipline.

Look for leaks in your budget that quickly add up but can be easily eliminated so you’ll have spare cash for an emergency fund. Looking for a great place to start? Lindsey suggests you stop ordering sodas with fast-food or restaurant meals. You can easily save as much as $30 a month if you dine out daily for lunch and order water instead of soda, he said. For that matter, you can save even more if you bring your lunch from home and skip restaurant meals entirely.

For more ways to save, you can cut unnecessary expenses and lower your monthly bills.

The money in your emergency fund needs to be easily accessible, Lindsey said. Look for an interest-bearing savings account or money-market account. The rate you get won’t be high — 1 percent is a good yield now — but you won’t run the risk of losing your money. And you won’t have to pay penalties to withdraw it, as you would for early withdrawals from certificates of deposit.

When to Start Saving for Retirement

Once you’ve saved enough to cover six months’ worth of expenses, “everything from that point on goes into retirement savings,” Lindsey said. You should set aside at least 10 percent of your pay, he said. The best way to do this is to take advantage of a workplace retirement account and have contributions automatically deducted from your paycheck.

For more strategies, see these 17 clever ways to save for retirement. And, remember, if you don’t need to tap your rainy day fund for an emergency, you can use it in retirement to supplement your savings, Arzaga said.

Note that there is one strategy that allows you to save for retirement and an emergency simultaneously — saving in a Roth IRA. It’s not ideal, but it is an option for people who are discouraged with the idea of taking a few years to build cash reserves before investing for retirement, said Vincent Wagner, a CFP and president of Guide Tower Financial Planning.

“Psychologically it can help accomplish the emergency fund goal but also have a retirement savings component,” he said.

The purpose of a Roth IRA is to save for retirement. But if you need money and don’t have an emergency fund, you can tap your Roth without the same consequences that you’d have if you took money out of other retirement accounts. You can withdraw your original contributions — not the earnings — to a Roth at any time without having to pay taxes or a 10 percent early withdrawal penalty.

When Wagner has used this strategy for clients, half of their contributions were put into cash or conservative bond funds and the other half was invested in stocks. After they had six months’ worth of expenses saved in the conservative bucket, 100 percent of their Roth contributions went toward the longer-term investment strategy, he said. 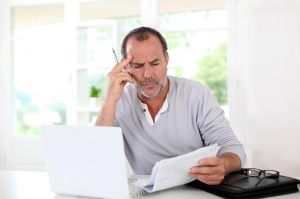