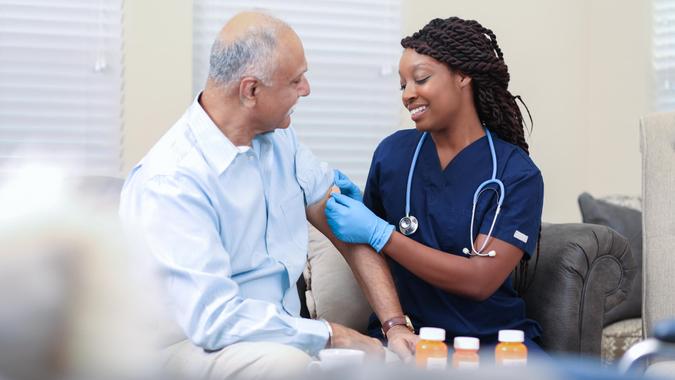 One of the main challenges facing retirees in the United States is figuring out how to pay for healthcare. On that count, most Americans are way out of sync when it comes to meeting their medical care obligations, according to a new study from Fidelity Investments.

Fidelity’s annual “Retiree Health Care Cost Estimate,” released on May 16, found that a 65-year-old couple retiring this year can expect to spend an average of $315,000 in healthcare and medical expenses throughout retirement. The 2022 estimate for single retirees is $150,000 for men and $165,000 for women.

But researchers also found that on average, Americans estimate that a couple retiring this year will spend only $41,000 on healthcare expenses in retirement — which is nearly eight times less than the $315,000 pegged in the Fidelity study. More than two-thirds (68%) of respondents believe that associated costs will be less than $25,000.

This year’s healthcare/medical expenses estimate is up 5% from 2021 ($300,000) and has nearly doubled from its original $160,000 in 2002. When respondents were informed of Fidelity’s 2022 estimate, 70% said they feel unprepared to cover healthcare expenses during retirement.

Fidelity’s estimate assumes both members of a couple are enrolled in traditional Medicare. Medicare Part A and Part B cover a wide range of expenses, including hospital stays, doctor visits and services, physical therapy and lab tests. Medicare Part D covers prescription drugs.

“Even as many Americans look to turn the page on the events of the last two years, staying informed on potential future healthcare costs should remain a top factor when planning for retirement,” Hope Manion, senior vice president at Fidelity Workplace Consulting, said in a press release. “By planning early and saving consistently, people can put themselves in a much stronger position to retire how and when they want.”