Saving money for retirement through your 401(k) should be like voting in a crooked election: Do it early and often. That’s advice that most Americans are probably getting from a chorus of financial experts, year after year. But perhaps the universal nature of that advice is a big part of why some people find it so easy to tune out. In fact, a 2018 Retirement Savings survey found that about 14% of Americans have $0 saved for retirement.

Part of the problem could be that a lot of Americans don’t quite realize just how much money they’re missing out on by putting off saving for retirement. That’s why GOBankingRates conducted a study to highlight just how much money you’re costing yourself when you don’t opt into your company’s 401(k) plan.

The results? By choosing to spend that little slice of your paycheck now rather than letting it grow through the magic of compounding interest, you could be costing your future self over $700,000 — the sort of dough that can help you avoid seeing your next egg scrambled long before you’re ready.

Click to See: Americans Have No Idea How Much They Actually Need for Retirement

Why Starting Early Is the Key to Investing

The key factor that fuels enormous growth is compounding interest. Essentially, when you collect gains from stocks and bonds, those gains then lead to larger and larger gains over time, snowballing into larger and larger amounts the longer you keep it in investments. That’s why even small amounts of money, when put aside and allowed to grow for long enough, can turn into truly substantial sums.

To get a clear sense of just how substantial, the study lays out what a “typical” American 401(k) looks like. Based on the median household income in the United States of $57,652 and the national average of a 6.2% 401(k) contribution, the annual contribution comes to $3,574. The study then assumes a 6.5% annual return on the 401(k) and an inflation rate of 2% and calculates just how much you’ll have in your savings at age 65 depending on when you start contributing.

Here’s a look at the potential loss of interest depending on how long a worker waits to start contributing to their 401(k):

The results are predictable, and a pretty stark demonstration why just so many experts keep hammering on this same point. Starting to save at the age of 25 will ultimately result in your 401(k) hitting $810,744 in retirement savings by the time you’re 65 — not the $1 million many often shoot for in their retirement fund, but pretty close. More important to understand here is that just $215,876 of that will actually be your contributions. About $600,000 — roughly three-quarters of the total — can be attributed to your interest and investment returns, meaning that you would have very nearly tripled the value of that money by waiting until you’re 65 to spend it.

Be Prepared: 11 Signs Your Retirement Is Going to Be More Expensive Than You Thought

When you compare that with how much you can expect to have saved if you start at age 60, you’re looking at facing your golden years with $789,618 less to make your retirement dreams come true. You’ll end up contributing just $18,599 and earn just $2,527 in returns. So, not only do you have a lot less, but about 90% of that money is just from your paycheck with precious little coming back from investments.

And, if you’re reading this and thinking, “Sure, waiting until 60 is insane, but I can coast until 40 without a problem,” guess again. If you only begin your 401(k) contribution at age 40, you’ll still be over half a million dollars behind where you could be if you started at 25. And of that $557,618 you’re missing out on, just $71,400 can be attributed to your contributions alone. Essentially, just waiting until age 40 will cost you about half a million dollars in money you would otherwise never have to spend, now or in the future.

Read More: Here’s How Much People Have Saved for Retirement in Every State

Take a closer look at the savings and losses you face by waiting longer to invest even when there is no employer match:

Matching Contributions Only Increase the Cost of Waiting to Save

Although you might think you can wait to invest, here’s a look at where your savings will be and how much money you’re letting go when your employer offers a 50% match up to 3% of your salary:

Running the numbers again to see how much you might be costing yourself by delaying retirement saving if your employer offers a 50% match up to both 3% and 6% of your salary, once again, leaves little room for interpretation in the results. If your employer matches half of your contributions up to 3% of your income, the cost of delaying retirement savings until age 60 grows almost $200,000 to $980,678, including $735,665 in lost returns from interest and investing. And waiting until 40 will translate to a loss of $692,543 in savings, $566,607 of which is interest and investment earnings. But, if your employer is doing a 50% match up to 6% of your income, the already staggering numbers get even higher.

Waiting until you’re 60 to start saving in that scenario will cost you about $1.2 million compared with someone who started at 25, $878,991 of which is just the returns you could have earned on your investments. And waiting until 40 still translates to a loss of $827,467, $676,995 of which is interest and investment income.

Take a look at the gamble you’re really taking if you’re not contributing to your 401(k) when you’re employer offers a 50% match on up to 6% of your salary:

The key takeaway, above anything else, should be the value of time in your retirement planning. Even more valuable, in fact, than your actual money when you begin to look at just how large your 401(k) account can grow with a relatively small portion of that coming from the face value of your actual contributions.

So, while it’s never easy to set aside some of every paycheck for your future — especially for families who might be scraping together every penny to get by — it’s important to remember that it might actually be harder not to, in the long run. Making room for your 401(k) contributions is too important to pass up, especially if you’re passing up valuable matching contributions from your employer.

Keep reading to find out exactly how much you need saved for retirement in your state. 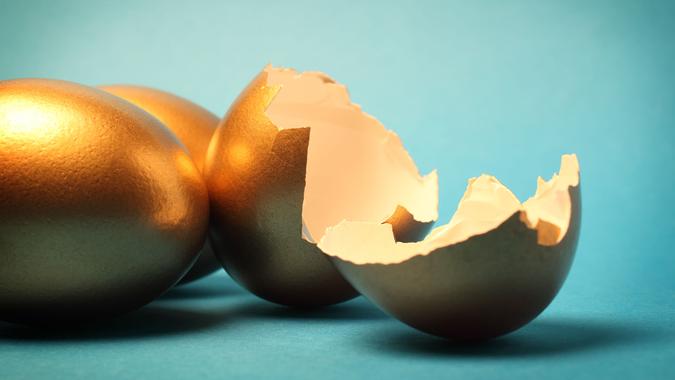 3 Mistakes That Could Ruin Your Retirement Nest Egg

Many Americans are unknowingly sabotaging their future finances.

> Retirement > Planning > Waiting Too Long to Save For Retirement Will Cost You $789,618