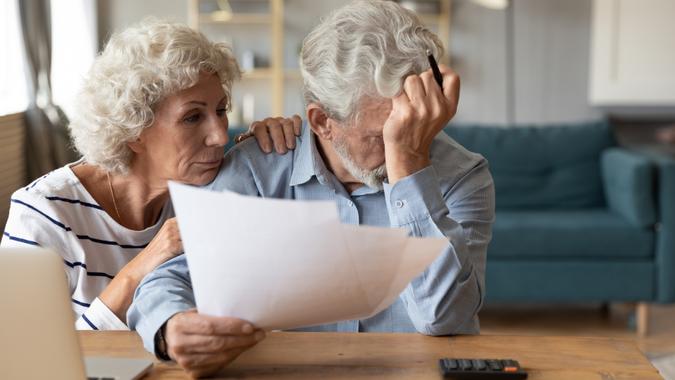 See: Best Cities To Retire on a Budget of $1,500 a Month
Find: Should Your Retirement Plan Include Long-Term Care? New Study Sheds Light on What To Prepare For

Unfortunately, about 64% of Americans are expected to retire with less than $10,000 in savings. That means a lot of them will struggle to pay their bills — and many might have no other choice but to consider bankruptcy.

This is never an easy decision, and usually an emotionally draining one. But it’s happening more often in recent years. A study released three years ago found that three times as many retirees were filing for bankruptcy than in 1991, according to the Debt.org website. That figure might move even higher in light of the financial hardships brought on by the COVID-19 pandemic and soaring inflation.

Numerous trends have contributed to the rise in bankruptcy among retirees. Here are some of the major ones listed by Debt.org:

One result is that a growing number of seniors are piling up the debt just to make ends meet. For those who find themselves facing dangerous levels of stress due to mounting medical bills, credit card or other debt they no longer have the financial resources to pay for, bankruptcy protection might be the only logical solution.

In this case, you have two options: Chapter 13 and Chapter 7.

With Chapter 13, you can keep your property as long as you commit any disposable income toward paying down your debt. As Debt.org points out, it’s “basically a three-to-five-year repayment plan” that allows you to restructure your debt so you don’t have to sell everything.

Chapter 7, which most people choose, is a totally different story. Here, you must sell your assets to pay off debts. You might lose some of your prized possessions, but you’ll be free and clear when it’s done, and the process typically takes only four to six months.

See: Jaw-Dropping Stats About the State of Retirement in America
Find: How COVID-19 Has Impacted Retirement Savings

In both cases, your Social Security benefit is not affected, and pension and retirement fund plans are usually protected from creditors.