Many Americans lack sufficient savings in their savings accounts, according to GOBankingRates’ annual savings survey.

For the third year in a row, more than half of Americans reported having less than $1,000 in savings, with 39 percent stating they have $0 saved in 2017.

There could be various reasons why Americans aren’t saving more money, from bad money habits to dealing with a high cost of living. However, there’s another possibility that’s often overlooked: Perhaps Americans are veering away from traditional savings accounts and choosing to save the majority of their wealth somewhere else, such as checking accounts or retirement accounts.

To find out where people are primarily saving their money and growing their wealth, GOBankingRates conducted another survey. Keep reading to learn how many Americans are storing their money today, and discover the best saving vehicles for you.

More Americans store their wealth in 401ks than any other sort of account, fund or investment, found the survey. 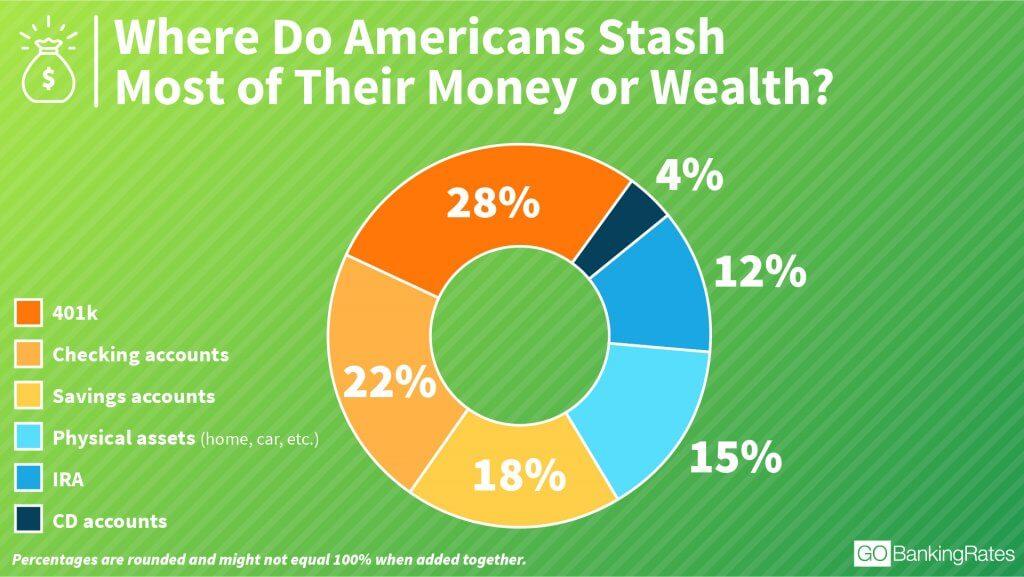 Of those surveyed, 28 percent said they store the majority of their wealth in a 401k. The next most common answers were “checking account” and “savings account,” with 22 percent and 18 percent of respondents choosing these choices, respectively.

The study also found that the amount of money people have stored depends on where they store it.

IRA vs. 401k: 7 Tips for Choosing the Best Retirement Plan

Age also plays a role in where Americans stash their cash. The youngest and oldest respondents are the least likely to have their wealth stored in 401ks, with 12 percent of young millennials (age 18 to 24) and 22 percent of seniors (age 65 and older) stating the majority of their wealth is in this type of retirement account.

Baby boomers (age 55 to 64) are most likely to have their wealth stored in a 401k, with 35 percent of respondents in that age range choosing that option. 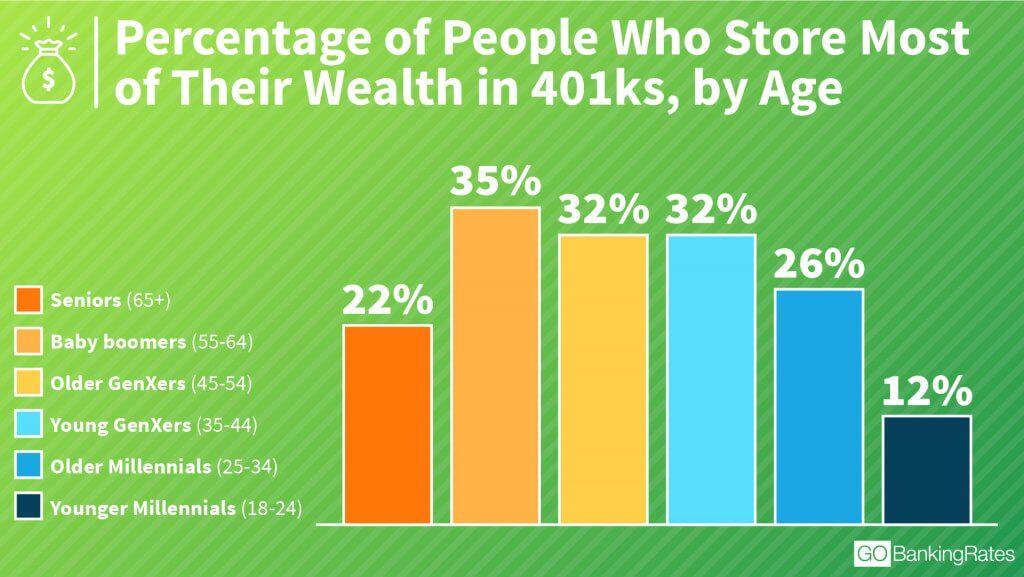 Younger respondents store most of their wealth in checking accounts, while those 65 and older spread their wealth out more across the various savings accounts and investments.

GOBankingRates’ 2017 Retirement Savings survey found that more than half of Americans will retire broke, with 34 percent stating they have no retirement savings at all. However, this more recent survey seems to indicate that those who do save tend to prioritize retirement savings over traditional savings.

The reasoning for this might be because saving for retirement can be easier. Typically, retirement savings are deducted from a paycheck automatically and put into a 401k, which means the saver doesn’t have to do much work. On the other hand, putting money in a traditional savings account usually requires an extra step (unless you set up automatic deposits and transfers).

“Most Americans who store their wealth in a 401k do it because of the ‘out of sight, out of mind’ principle,” said Luis F. Rosa, a certified financial planner with Build a Better Financial Future, LLC. “It’s a lot easier to have your employer deduct a contribution from your pay and put it right into the 401k than for you to get the money in your check and then make sure it goes right back out to some form of savings or investment.”

Compare: How Do Your Finances Measure Up to the Typical American’s?

Although 401ks are the more common vehicles for storing wealth, checking accounts have become the second most popular place to keep money. Traditional savings accounts come in third. 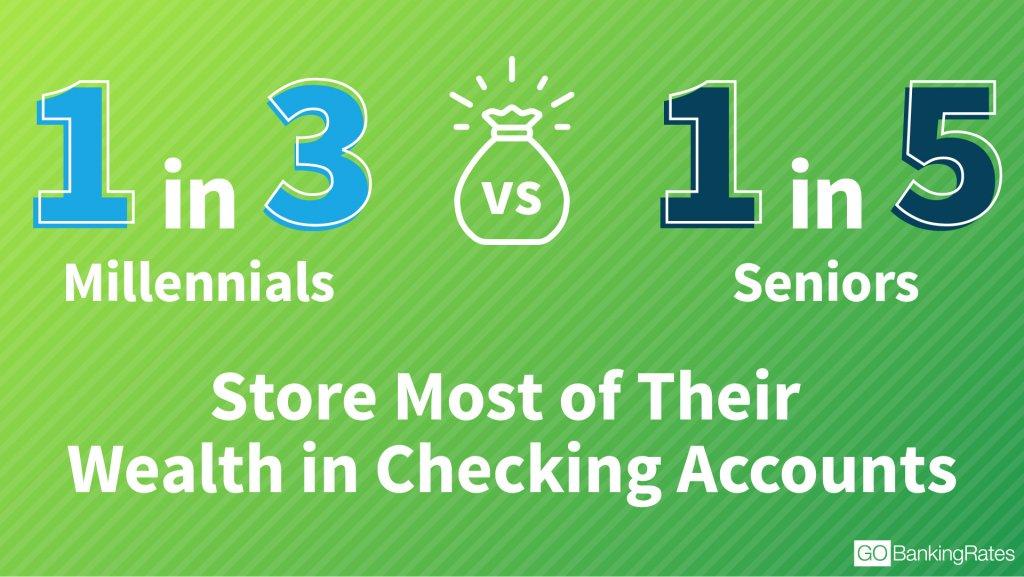 A previous GOBankingRates study found that the majority of millennials currently do not have enough money saved to cover six months of living expenses, with most young millennials living paycheck to paycheck. With no extra money to contribute toward savings, it makes sense that millennials would put their earnings directly into a checking account to cover day-to-day expenses.

Where Should You Be Storing Your Wealth?

Check Out: We Asked Americans What They Think About the Rich — And Their Answer Surprised Us

Before you decide, it’s important to weigh your options and learn more about each account:

However, interest rates on savings accounts are still low. And, some accounts have monthly fees and minimum balance requirements.

With interest rates offered by banks declining, it has become more tempting to forego savings accounts altogether in favor of keeping wealth in checking accounts.

“Interest rates are at historic lows, and many banks’ savings accounts don’t pay much more than checking,” said Michael Dinich, a retirement and tax planner at Your Money Matters.

However, there are drawbacks to using checking accounts as your main savings option. Dinich pointed out many banks now charge for checks and assessing monthly fees. But most alarming is the fact that funding a checking account and ignoring a savings account could make you more vulnerable to theft.

“In recent years, we have seen data breaches at the IRS, credit bureaus and major retailers,” said Dinich. “Using a debit card linked to your checking account increases the chance that your money may be compromised. It’s highly recommended that people only keep enough funds in the checking to cover bills, expenses and purchases.”

A certificate of deposit, or CD, is a deposit account that requires you to wait a fixed amount of time before withdrawing funds. If you choose to withdraw earlier, you will be assessed a penalty fee.

Although CDs don’t offer the same flexibility as checking and savings accounts, the interest accrued is typically higher. In fact, the best CD accounts have high interest rates and a range of CD options, including different term lengths and rate-increase features.

Build Your Savings: Here Are the Best CD Accounts of 2018

Putting the majority of your wealth in a 401k has several benefits, one of which being its convenience.

“Another benefit is the tax deferral of the income contributed,” said Rosa. “Currently, an individual can contribute up to $18,000 per year ($24,000 if age 50 or older) and defer the taxes until a later date, presumably in retirement while in a lower tax bracket.”

“Typically, employers will offer matching contributions to a 401k,” added Dinich. “Savers not able to max out both their 401k and individual accounts would be wise to try and fund their 401k first to get the employer matching.”

However, 401ks come with less flexibility than other investment plans, so you might not accrue as much in a 401k as with an account that offers more investment options.

“Most 401k holders are limited to a small menu of investment options to choose from,” said Dinich. “Savers looking for more aggressive investments as a part of their savings plan, such as stock options, futures, alternative assets, gold, etc., may find the 401k too restrictive.”

With an IRA, you can save for retirement if your employer does not offer a 401k or pension plan. And, contributing to an IRA reduces your taxable income. To qualify for an IRA, applicants must meet income requirements, and contributions are capped.

Physical assets can include homes, collectibles and vehicles. Investing in the right asset can boost your net worth.

But keep in mind that maintaining an asset, such as an expensive car, can end up costing more than it’s worth. And, some asset values — like a car — can depreciate over time. Plus, you can’t immediately access funds from an asset.

No matter where you store your wealth, it’s important that you have savings set aside for unforeseen expenses and emergencies. Financial experts recommend having enough funds saved and accessible to cover six months’ worth of expenses.

Even if that’s not a financially viable option, make saving money a habit now to be prepared for whatever comes your way in the future. 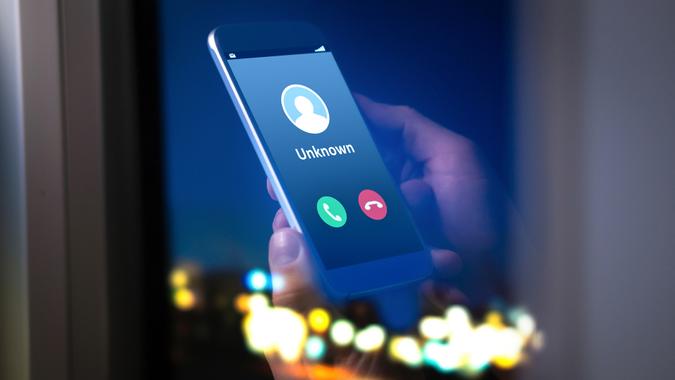 Protect Yourself From These 10 Scams Targeting Retirees

When you have a lifetime of savings you're a prime target.

> Retirement > Planning > Here's Where Americans Are Storing Most of Their Wealth