Would You Consider a ‘Golden Girls’ Retirement? Plus 5 More Out-of-the-Box Retirement Ideas 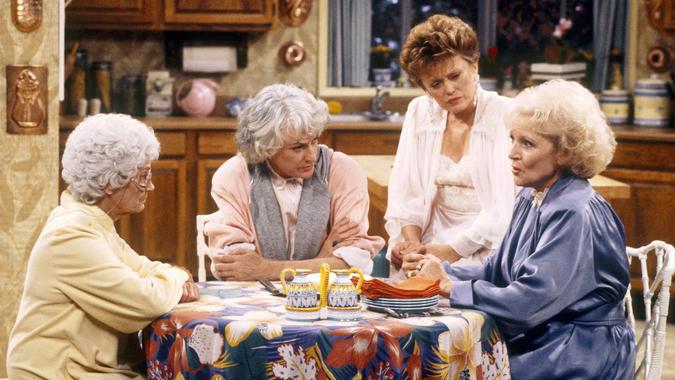 Traditionally, the concept of living with roommates is only hyped as an option for affordable living when you’re in your 20s and 30s — but the groundbreaking sitcom “The Golden Girls” suggests otherwise.

Debuting in 1985, “The Golden Girls” revolved around the unlikely friendship formed by four women, all forced into seeking roommates once life threw some unexpected curveballs their way. Though the main point of the show was to make people laugh and feel good, it also offered rather ahead-of-its-time social commentary and made the idea that living with friends in your twilight years can actually be pretty fantastic.

Retiring like the Blanche, Rose, Dorothy and Sophia may not be exactly what you’re looking for (after all, there’s no guarantee you’ll actually want to eat cheesecake with your new roommates), but it’s a great way to save on rent and (ideally) forge bonds with others in similar situations. If this sounds a little too extreme, consider some other ideas for an outside-the-box retirement.

Poll: How Do You Plan To Travel Over the Thanksgiving Holiday?

“One of the things people assume in their retirement plan is that they’ve got to stay in the United States or fund a cost of living similar to the one they had when they were working,” said Victor Medina, a CFP and estate planning attorney with Medina Law Group. “There are lots of locations outside of the United States that have a lower cost of living with a similar or higher standard of living. Using the concept of geoarbitrage, you can take advantage of your strong currency power with savings in U.S. dollar to live richer in a country with a lower cost of living.”

Medina cited Ecuador as one potential option, as it has a big population of U.S. retirees, great weather all year, a low cost of living and a healthcare system with strong relationships to hospitals in the U.S.

The financial upside of geoarbitrage is that you get to live a more prosperous life for less, but of course, there are also downsides.

“The U.S. dollar is strong because the U.S. economy is stable,” Medina said. “That’s not always the case for other countries. Currency values can fluctuate, sometimes wildly. An economic advantage today may shift and you may lose that purchasing power advantage in the future.”

Additionally, those who opt for the geoarbitrage lifestyle need a good travel budget and flexibility to relocate.

Living With Your Kids

“Moving in with your adult children, or asking them to move in with you, can offer many benefits for both parties,” said Jake Hill, CEO of DebtHammer. “It seems like this option is considered the last resort, but combining households may mean you can live in a larger house with more amenities. This arrangement also allows grandparents to spend more time with their grandkids and watch them grow. For the younger family members, having live-in child care can be a huge weight off their minds.”

The financial pros of this retirement plan are obvious, but this plan takes a group effort to be a success.

“For this to work, everyone needs to set proper boundaries and establish some basic rules to which everyone agrees,” Hill said. “If it works out, everyone saves money and gets more valuable family time.”

Another unconventional idea to consider when retiring is to purchase and move into a RV, which is what Kara Metcalf of Trying To Unwind and her partner did in their 30s when eyeing a relaxing retirement down the road.

“RV living is less expensive than maintaining our pre-retirement life which included a big house and multiple cars,” Metcalf said. “We live a very comfortable and adventurous life for less than $50,000 a year. This includes eating out regularly, taking tours and buying local goods.”

Living in a RV means cheaper utility bills and less maintenance than a regular house or apartment, but there are drawbacks, largely when it comes to the rising cost of gas.

“Fuel costs are a large portion of our budget since RVs have notoriously poor fuel economy,” Metcalf said. “Rising fuel costs can impair travel plans, but RVers have control to move less and stay longer to keep costs down.”

Complete White Label — a content and outreach agency — has seen a huge rise over the last year of retired customers starting their own blogs and affiliate websites.

“As a retirement plan, making a blog a business is one that involves a lot of work upfront,” said James Crabtree, director of Complete White Label. “But once the wheels are in motion, it can be passive once the website is making enough to pay for content and important digital processes to be outsourced.”

The pro of going into blogging in your golden years is that the upfront costs tend to be small, and as a retiree, you’ll have the time to create the content needed to keep the site alive.

“Financially, the money is incredibly passive, can easily reinvested into the business and growth is likely if content publishing is done frequently,” Crabtree said.

The main con with this retirement plan is that it can take anywhere from six to 12 months on average to start making money.

“With the nature of how long a website can take to rank in Google it’s definitely a waiting game, and naturally that can put people off — especially if they’ve spent money upfront on content for their website business and are eager to see a return on their investment,” Crabtree said.

Turning a Hobby Into a Job

“An example of an unconventional retirement plan is where you turn something you love doing (a hobby like painting or interior design) into a viable income stream,” said Pam Krueger, founder and CEO, Wealthramp. “It’s a way to augment what you’ve saved for retirement without feeling  like a job you’re forced into. You’re the boss. It’s an activity you’re doing for the love of it, in your own time. Take for example Sandy in Massachusetts, who lost her job at 70. She was hired for a part-time role and then fired shortly after. Instead of looking for a new job, she opened a part-time interior design business, offering her services first to family and friends that turned into an overwhelming number of referrals for new projects.”

The pros of turning a hobby into a job are that you’re continuing to generate revenue even once you’ve retired,  and you’re also channeling your creativity. But there are cons, too.

“There are costs involved with launching even a part-time business,” Krueger said. “You need to evaluate those costs and decide if you want to make the financial investment. For instance, in the case of Sandy, she needed to purchase materials, subscriptions, industry credentials/registrations, etc. As long as the costs are affordable and do not cut into your savings significantly, it can be a rewarding path to pursue. The whole point of doing something like this is to give yourself peace of mind and to have fun along the way. Don’t lose sight of this.”