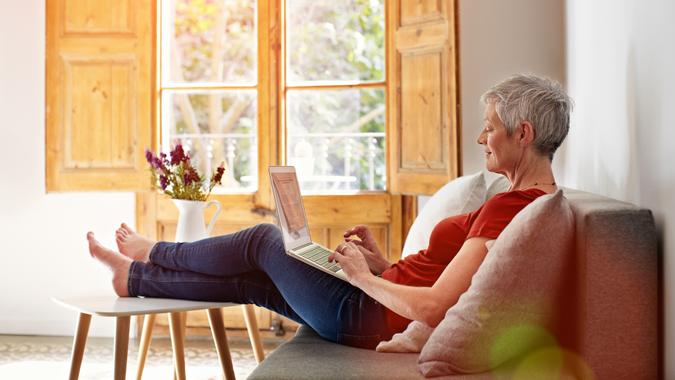 Social Security: Why You Don’t Have To Entirely Depend on It, Even With No Savings
Learn: 15 Best Places in Texas for a Couple to Live Only on Social Security

If you want to know how much that difference adds up over the course of a retirement, consider this: During a 20-year retirement, the average man will receive about $85,000 more in Social Security benefits than the average woman. Over 30 years, the difference is more than $127,000.

You don’t need an economics degree to figure out why: It’s because women have consistently earned less than men over the decades — and that pay gap still exists. Heading into 2022, women earned 82 cents for every dollar men, according to the Society for Human Resource Management, which cited research from Payscale’s 2022 State of the Gender Pay Gap Report.

Women are also much more likely than men to leave the workforce to care for children. The result is that they don’t earn nearly as much money as men over the course of their professional lives. This has a major impact on their Social Security retirement benefits, which are based on income during your 35 highest-earning. When someone drops out of the workforce for a substantial number of years, those zero-income years are factored into the benefit calculation, which shrinks checks even more.

There have been some encouraging developments, however. The Social Security gender gap has been slowly narrowing over the last few decades as the gender pay gap shrinks as well. As USA Today noted, in May 2000, women received less than 77% of the average man’s Social Security check. As of May 2022, the difference was closer to 81%.

For women (and others) in the working world who want to help increase their Social Security benefits in retirement, the best strategy is to find opportunities to boost income. Consider asking for a raise, obtaining licenses and certifications that can lead to higher pay, or switching to a better-paying job. If you can’t work outside the home due to caretaking responsibilities, look for remote jobs or side hustles that can bring in income.

Just keep in mind that if you do get a side hustle that involves 1099 income rather than W-2 income, you’ll need to pay into Social Security on your own through estimated tax payments or on your tax returns.

Social Security: How Much Is the Spousal Benefit Actually Worth?
Discover: 5 Things Millennials Should Know About Social Security

It’s also important to earn income for at least 35 years, even if some of those years only involve working part-time or side gigs. If you can make it past 35 years while earning a high income, the higher-earning years will replace any lower-earning years that came earlier.