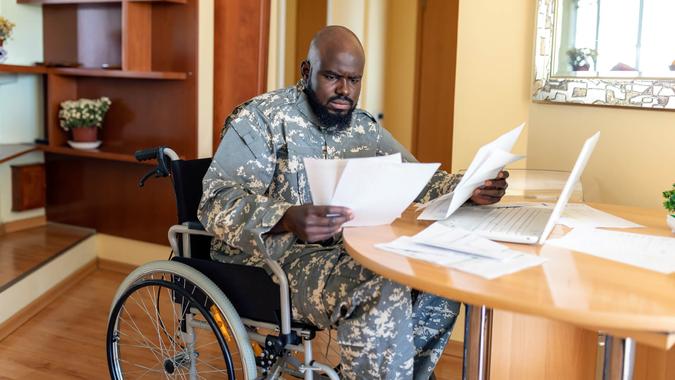 Pay and benefits in the U.S. military are highly regimented, and those with long-term service records are typically eligible for significant pensions. So, it’s an entirely worthwhile question if you’re wondering if those serving in the military are eligible for Social Security, and if so, if their benefits are any different than those in the civilian workforce.

See: Best Cities To Retire on a Budget of $1,500 a Month
Find Out: How Long $500K Will Last in Retirement in Each State

The good news for many veterans is that they are not only eligible for Social Security, but in many instances service members are entitled to additional earnings credits as well. Here is what veterans should know about Social Security and how their service record may increase their benefits.

For 2022, you can earn one quarter of coverage with $1,510 in earnings, but this amount is adjusted each year and was likely much lower for veterans when they were still in the military. You can check your qualification status with the Social Security Administration at any time by visiting ssa.gov.

Special Credits for Service From 1940 Through 1956

Veterans who served from 1940 through 1956 did not pay any Social Security taxes. However, if you fall into this category, you may still be granted a special Social Security credit if any of the following are true:

Credits amount to $160 per month. Note that the $160 credit for service from 1940 through 1956 is not added to your monthly benefit, but simply to your earnings record. As your payout is based on your earnings history, this increase will translate to higher benefits, just not on a dollar-for-dollar basis.

Special Credits for Service From 1957 Through 1977

As with all additional veterans’ credits, this amount is added to your earnings record for the purpose of calculating your benefits and is not added to the actual benefit amount itself.

Special Credits for Service From 1978 Through 2001

Special credits for veterans are calculated a bit differently for those who served from 1978 through 2001. For these service men and women, Social Security grants an additional $100 in earnings credits for every $300 of active duty basic pay, with credits topping out at $1,200 per year.

Thus, veterans in these decades can still earn the same $1,200 in earnings credits as those who served from 1957 through 1977, but it would take $3,600 in actual active duty earnings to qualify for this maximum increase. Note that if you enlisted after September 7, 1980 and did not complete either your full tour or at least 24 months of active duty, you may not qualify for these additional earnings credits.

After 2001, Congress discontinued additional credits for veterans. If your service record began in this era, your Social Security benefit is limited to your actual earnings record only.

Why Are Veterans’ Benefits Adjusted?

Before 2002, military compensation in the form of food, shelter and medical care was not used in the computation of Social Security benefits for veterans. In an attempt to correct this oversight, special credits were applied to most veterans who served between 1940 and 2002.

However, after 2001, Congress determined that these funds should instead be reapplied to other military pay and retirement initiatives, so the extra credits were dropped. It is believed that this change had minimal impact on the ultimate Social Security benefits received by military veterans.