The economy is booming, the stock market — despite a recent downswing — is near a record high and yet a significant portion of Americans are still living paycheck to paycheck. To help understand why, GOBankingRates conducted a survey of 4,485 people to determine not only how many Americans were living paycheck to paycheck but also to understand why. For some respondents, the simple reason is that they aren’t earning enough income, but there are a number of interesting results that turned up in the survey. Since so many Americans can seemingly use some extra support, and seeing as it’s going to be an issue in the 2020 presidential race, the question of universal basic income was also raised.

Nearly Half of All Americans Are Living Paycheck to Paycheck

When asked if they were currently living paycheck to paycheck, 49% of respondents confirmed that they were. However, these results varied greatly depending on a number of factors, from respondents’ state of residence to their age and gender.

Survey question: Are you currently living paycheck to paycheck?

For Many Americans, Housing Is the Biggest Issue

Of respondents indicating they were living paycheck to paycheck, 37% said that a high cost of living, particularly in terms of items like housing and utilities, was the primary cause.

Following closely behind at 29% was the response, “I don’t make enough money each month at my current job.” Combined, these two categories accounted for about two-thirds of the overall responses.

Save Money Quickly: The 10 Best Short-Term Investments for 2019

Almost 45% of Americans Have Nothing in Their Savings Accounts

Of the large percentage of survey respondents that claimed they are living paycheck to paycheck, nearly two-thirds also indicated that they have less than $500 in their savings and investment accounts, with a whopping 44% reporting a balance of $0.

This is disastrous financial planning, as the smallest emergency expense could result in these respondents amassing high-interest debt or even facing bankruptcy. Only 3% of respondents indicated that they had over $20,000 in savings and investments.

Universal basic income, or UBI, has been an idea kicked around by politicians for centuries, but it’s becoming a front-and-center issue as the 2020 presidential election looms large. Presidential candidate Andrew Yang, for example, is among those that heavily support UBI and intends to make it a reality if he’s elected.

In a nutshell, universal basic income would provide an unconditional monthly payment to all Americans without needs testing or other qualification. This means that every single American gets a guaranteed income every month whether they are retired, unemployed or working as the CEO of Apple. Under Yang’s plan, this payment would amount to $1,000 monthly. The candidate describes his version of the UBI as a “freedom dividend,” paid for by reductions in spending, a value-added tax, new revenue and taxes on top earners and polluters.

Survey question: What is your opinion of a universal basic income (UBI), a fixed income or stipend provided by the government given to all citizens regardless of income or work status?

Other presidential candidates have proposed variations of UBI, such as Kamala Harris’ LIFT the Middle Class Act and Cory Booker’s American Opportunity Account, but none have proposed the same type of no-strings-attached payment as Yang.

As great as it sounds to get “free” money deposited into your account every month, survey respondents are decidedly split on the concept. Twenty-eight percent of all respondents flat-out reject the idea of UBI, while an additional 29% indicate they need more information before they can make a decision. Only 13% support the UBI unequivocally, while the remaining 30% of respondents don’t have an opinion either way. The lowest level of support, at just 7%, comes from those age 65 and older, while 20% of 25- to 34-year olds indicate support.

Check Out: How To Prepare For Rising Gas Prices and Taxes

The Average American Would Need $2,200 to Stop Living Paycheck to Paycheck

A Large Number of Americans Are in Dire Financial Straits

Overall, the survey unearthed some surprising findings about the financial state of the average American worker. About half of workers surveyed are living paycheck to paycheck, and for the most part, it’s because they simply aren’t earning enough income. According to the survey, workers would need to earn an additional $2,200 to cover their living expenses with room to spare, and that’s a significant jump when two-thirds of those surveyed are earning less than $4,200 per month. Seen another way, this means that those living paycheck to paycheck would need a salary bump of more than 50% to get out of the paycheck-to-paycheck cycle.

An additional worrisome result from the survey was that more than half of those polled had less than $1,000 in savings, with 31% of all respondents having nothing at all. Coupled with incomes that can barely cover expenses means that the majority of those surveyed are in a precarious financial position. Yet, the majority of respondents also indicated they either didn’t know enough about or didn’t support universal basic income.

If you find yourself identifying with the financial situation of the average poll respondent, there are steps you can take to help shore up your finances. Developing a budget can help identify where you’re coming up short on a monthly basis when it comes to your income and outflow. Tightening up spending on discretionary expenses can help your money stretch further, while taking a second job, asking for a raise or switching jobs completely may help with the income side of the equation. Lastly, “paying yourself first” is a way that you can always ensure your bills are paid before anything else, and that at least some of your money gets set aside every month for either an emergency fund or investments.

Methodology: GOBankingRates surveyed 4,485 Americans over the age of 18 from July 22, 2019, to Aug. 7, 2019, asking six different questions: (1) Are you currently living paycheck to paycheck?; (2) Why are you living paycheck to paycheck? Select all that apply; (3) What is your opinion of a universal basic income, a fixed income or stipend provided by the government given to all citizens regardless of income or work status?; (4) What is your annual income before adjusting for income taxes?; (5) How much more money do you need to earn each month to stop living paycheck to paycheck?; (6) How much do you have in your savings and/or investment accounts (not including retirement accounts)? GOBankingRates used Survata’s survey platform to conduct the poll. 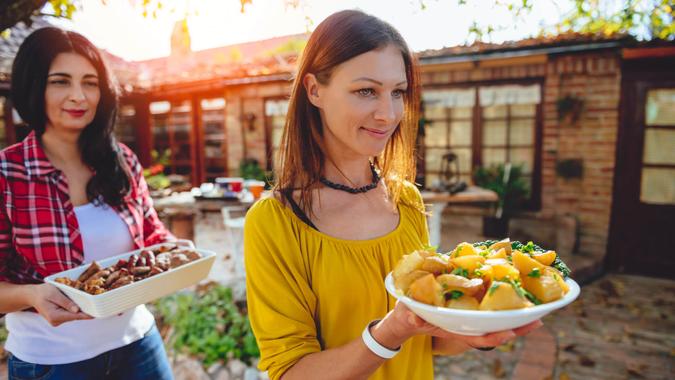 Here’s How Much Americans Have in Savings in Every State

Empty savings accounts are alarmingly widespread in some areas.

> Saving Money > Budgeting > 49% of Americans Are Living Paycheck to Paycheck