If you’re familiar with Suze Orman, you have probably watched, with a combination of horror and amusement, her infamous “Can I Afford It?” segment. Unsuspecting guests are scolded before an audience of millions while Orman explains why they’re too poor to have nice things.

Usually, she’s right — many callers make ridiculous requests to spend money on things they don’t need. Other times, she’s obviously trying to reach her “Denied” quota for the week.

In general, Orman loves to tell people “no” — but there are four things she has claimed you can’t afford that you really, probably can.

In February 2012, Forbes featured Suze Orman’s top five money mistakes according to a recent show — and her No. 4 biggest mistake was using a prepaid debit card. Orman cited excessive and unnecessary fees as the reason why Americans should avoid this banking product completely.

Although she’s correct in that regard — prepaid debit cards are notorious for charging multiple fees for everything from checking your balance to calling customer service — they can be a useful alternative to checking accounts for consumers who can’t or won’t use more traditional methods of managing their money. Depositors who have been reported to ChexSystems or parents who want to keep a close eye on their teen’s spending are just a couple examples of people who can actually benefit financially from using a prepaid debit card.

Orman apparently disagreed with her own advice, launching a prepaid card herself in 2012. The Approved Card was met with extreme controversy, likely because Orman was suddenly endorsing a product she had historically criticized, which included all the same, evil fees she warned against, and was discontinued a short while later on July 1, 2014.

Following the financial crisis, the housing market mas marked by widespread default and foreclosure. Those who were lucky enough to still have their homes often owed more money on the loans than the properties were worth.

The underwater mortgage epidemic left many homeowners questioning whether it was worth struggling to keep up on a mortgage that was double the value of their home. Orman’s answer: Stop paying.

In fact, Orman advised during a 2011 appearance on “The View” that Americans whose mortgages are more than 20 percent underwater and who cannot qualify for a loan modification or short sale should consider walking away from a mortgage and hand over their house keys to the bank and say “bye-bye” to that bad investment. Unfortunately, that segment has since disappeared from “The View”‘s archives, but we found a clip here:

Let’s examine some of the consequences of ditching a mortgage:

So really, what is a worse investment: Paying for a home that has fallen in value and will likely recover in several years, or throwing away hundreds of thousands of dollars, giving up your home and destroying your credit all in one fell swoop — all while still having to pay back that loan anyway? If you can afford your mortgage payments, by all means, keep paying them.

In an interview with The Fiscal Times, Suze Orman discussed how she’s teaching people to live within their means, citing a segment featuring a young teen requesting to be approved for a purchase:

“A 13-year-old called my show the other day and asked, ‘Can I afford a $120 pair of True Religion jeans?’ I asked her, ‘Would you still want those jeans if the money you spent on them today grew to $2,000 by the time you’re my age?’ She got it. But because she was on television, she also said, ‘Well I’m still going to buy those jeans, because that’s why I came on your show.'”

Just because something is expensive does not mean it’s not worth the higher price tag. In fact, sometimes spending more up front means avoiding the cost to repair or replace the cheaper version multiple times.

Orman didn’t probe for more information about her caller’s financial situation — she simply “denied” the purchase because it was a luxury item. While a 13-year-old probably has no business spending $120 on anything, we have no idea what that girl’s family’s finances looked like or how much money she already had in savings. And to be honest, I’d rather have a nice pair of jeans now than wait 40 years for $120 to turn into $2,000.

Brian and Jill, the parents of a 17-month-old baby who want to have a second child, appeared on the Suze Orman show to find out if they could afford to live on one income while Jill stayed home with the kids for a few years.

Of course, they were denied!

But let’s forget for a moment the fact that this couple wanted to go from two to one incomes. What is really strange about this segment is how Orman presented the cost of adding a child to their family.

First, Orman warned their expenses would shoot up by $700-$1,000 per month. Were they planning to clothe their child in golden fleece diapers? Fill its bottle with foie gras?

She failed to consider Brain and Jill already have a baby, which means most of the up-front costs — such as baby-proofing, car seat, stroller and clothes — are already taken care of, for the most part. Diapers, formula and a couple of onesies do not cost an extra $1,000 a month. The only baby expense that could impact their finances that severely is child care, which the couple was attempting to avoid by having a stay-at-home parent.

Secondly, Orman admonished the couple for having a measly $6,000 emergency fund, far below the eight months’ worth of expenses — or $56,000 — they should have saved.

Finally, this entire conversation revolved around the notion that Brian and Jill would maintain their current lifestyle after the second baby is born.

The harsh reality all parents eventually face is that having children requires a whole lot of sacrifice, including time, money and a social life. Few couples have children with the expectation that their lifestyle and financial situation will remain exactly the same. And if everyone waited until they had $6,000 in monthly take-home income and $56,000 sitting in the bank before having kids, well, no one would be having kids.

The heart of Orman’s message is right: Take control of your financial situation to take control of your life. There’s nothing wrong with encouraging people to get rid of their debt and save more money. But in the end, why do we strive for that control and stability? So we can enjoy life.

We also have to recognize that perfection is a myth and it’s okay to spend money on non-essentials every now and then. After a certain point, it’s not worth scrimping and saving every penny if it means living like a miser.

The best thing Suze Orman can do for her audience is stop telling them what they can’t afford and instead, provide the tools and guidance needed to learn to save for the things they want most. 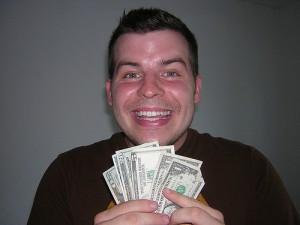 10 Huge Mistakes to Avoid When Trying to Save Money