Electric Vehicles Are About to Be Cheaper Than Gas Cars 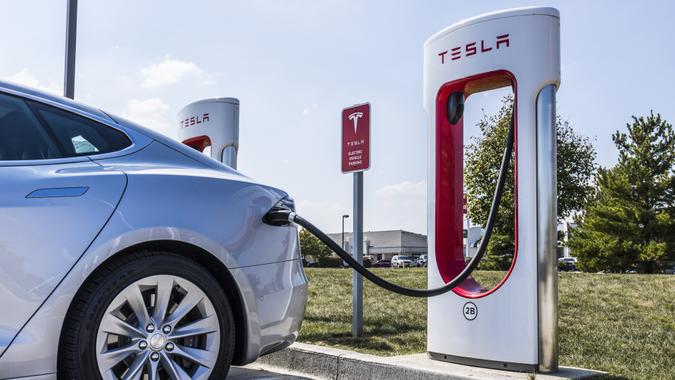 While news of the Colonial Pipeline cyberattack triggered panic last week in some regions, electric vehicle owners were glad they could skip the long lines at the pump due to fears of fuel shortages.

Find Out: Tesla Makes More Money From Bitcoin Than It Does From Cars — What Does That Mean for Your Stock?
Learn More: Elon Musk Asks: Should Tesla Accept Dogecoin? How Much Would You Need?

With the average price for an electric car being $19,000 higher than gas-powered vehicles, many drivers do not see it as a practical option, notes CBS News. Many consumers, however, are left wondering whether electric cars are cheaper to drive. Scientists at the U.S. Department of Energy’s National Renewable Energy Laboratory and Idaho National Laboratory have broken it down state by state.

Washington State is by far the cheapest to run a battery-powered electric car over the 15-year life span of a vehicle. The electricity required to power the vehicle can be as much as $14,480 cheaper than fueling up a gas-powered vehicle while in Hawaii, charging up your electric car could cost $2,494 more than gas, according to the study.

A Consumer Reports analysis of electric vehicles also found that the typical total ownership savings over the life of most EVs ranges from $6,000 to $10,000, CBS reports.

“No matter how you look at it, the massive lifetime savings potential of EVs could be a game changer for consumers,” says Chris Harto, Consumer Reports senior policy analyst for transportation and energy, and the leader of the study. “As battery prices and technology improve, prices come down, and more attractive models hit the market, it’s only going to get better.”

Dr. Jeffrey Sachs, an economist and sustainability expert, expects the total cost of EVs to fall below gas vehicles in two to three years, reports CBS. Battery prices have dropped by as much as 90% and Sachs added that more manufacturers may soon go the way of Tesla.

Check Out: 50 Most Environmentally Friendly and Affordable Vehicles
Read Next: The True Cost of Going Electric

CBS also noted that the Biden administration promised $15 billion to build 500,000 charging stations nationwide and the number of EV models is expected to triple in the US in the next three years.