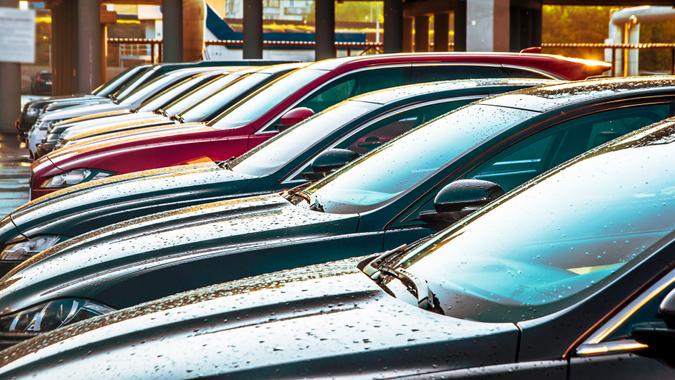 If you’re budgeting for a car, think about where you’ll buy as much as what you’ll buy — you could save or squander big bucks depending on the state where you make the purchase. Financially speaking, some states are absolutely better than others when it comes to springing for a new set of wheels. But the concept of “better” can vary considerably depending on whether you’re buying a new car, a used car, an EV or an old-fashioned gas guzzler.

Find Out: 30 Biggest Do’s and Don’ts When Buying a Car
Read: 25 Tips and Tricks for Buying a Car Online

GOBankingRates asked the experts to help you zero in on the right state to purchase a vehicle depending on what you’re buying.

A handful of states stand out as exceptional for buying big-ticket items like cars — and to count them, you need only the fingers on one hand.

“The only five states where you can get a car tax-free are Delaware, New Hampshire, Oregon, Montana, and Alaska,” said Jameson Carr, owner and founder of ChoiceWineries and former general manager at YourMechanic. “If you want to avoid paying exorbitant taxes on your next automobile purchase, these are the states to visit. Coincidentally, these five states are also known for having the lowest car-related fees of all the states in America.”

Consider States With Low Registration Fees and Other Costs

Kerry Sherin is a consumer advocate with Bumper.com, a leading vehicle history search site and marketplace. The company recently finalized a state-by-state analysis of financial considerations, rebates and tax incentives associated with car buying. The results reveal a wide spectrum of possible costs.

“The fees absolutely vary by state,” Sherin said. “While some states offer registration and renewals for under $100, others like Hawaii can exceed $300.”

Oddly, states with infamously high living costs can also be those with the lowest car-related fees.

“Registering your car and handling all documentation typical for the car-buying process is the cheapest in Oregon, followed by New Hampshire and Alaska,” Carr said.

In some states, the laws and regulations are designed to make it more expensive to own older cars that are unkind to the environment.

“For example, some states have stricter resale requirements, such as a smog check, which can make it more difficult to buy a used vehicle and potentially impact the cost,” said Tiffany Lemke, senior manager of customer experience at by-the-mile auto insurer Metromile.

“States with high regulation in terms of emissions will be more expensive, California and New York, specifically,” she said. “These states also have a higher cost of living in general, so this is not surprising.”

Extra Expenses: These 20 Cars Cost the Most To Maintain

“California, Colorado, and Oregon lead the way for EV rebates, with 90 offered in California and 25 for each of the latter states,” Sherin said. “California also has 47 different tax incentives that they are offering in relation to EVs, followed by Colorado and Washington, each with 20.”

Today, of course, buying used can be a multistate deal sealed through a mobile app.

“Aggregate sites like Carvana have changed the landscape as well,” Bausch said. “Many people are buying cars from across state lines now, but keep in mind, if you save a few hundred on the car of your dreams in another state, you may have to pay for it to be shipped to you.”

Find Out: Cars, Trucks and SUVs With the Best Gas Mileage

With So Many Variables, It’s Hard To Pick One State as ‘Best’

In the end, the list of factors that can change a car’s price seems to go on forever no matter where you live.

“Everything from gas prices to weather can affect what makes and models are more or less desirable and therefore determine the price in that state,” Lemke said. “For example, it may be more expensive to buy an electric or hybrid vehicle in states with high gas prices like California as those vehicles are more in demand. Better deals on vehicles like pickup trucks or all-wheel drive vehicles can be found in states where those types of cars are more popular as there is higher inventory and plenty of options for a buyer to choose from.”

Find Out: Don’t Get Suckered Into Paying For These 25 Useless Things at Car Dealerships

But If There Were a ‘Best,’ It Would Be Florida (Sorry, Texas)

Variables like taxation, climate and inventory can all make one state better than another for car-buying — but two stand out above all the rest.

“Florida and Texas rank among the best states for used car buyers and see a high level of out-of-state purchases,” said Robert Walden, editor-in-chief and owner of VehicleFreak. “This is because of favorable sales tax rates, high-quality vehicles, no winter driving, and a massive inventory of vehicles with high turnover.”

But for many experts, there is simply no comparison between the Sunshine and Lonestar states.

“When it comes to low car costs, Florida beats all the other states by a significant margin,” Carr said. “In Florida, it’s possible to get a car at a price so low that it simply doesn’t make sense to shop anywhere else, with or without taxes. The reason for that is an overabundance of cars, courtesy of Florida’s large elderly population. As their ability to drive a car deteriorates, they opt for selling it, usually at relatively low prices. On top of all that, Florida’s warm climate means there’s no salt on the roads in winter, hence less rust in cars.”

Then, of course, there are the states you should avoid. Not surprisingly, they’re the ones that are crowded, expensive and prone to lousy weather.

“The worst states for buying cars are generally those with large metropolitan areas and urban sprawl, like highly urbanized states on the East Coast — New Jersey, New York, and Pennsylvania, in particular,” Walden said. “The problem here is limited inventory, high sales taxes, and multiple fees associated with buying a car.”