How To Find the Best Deals on New Cars, Used Cars and Leases 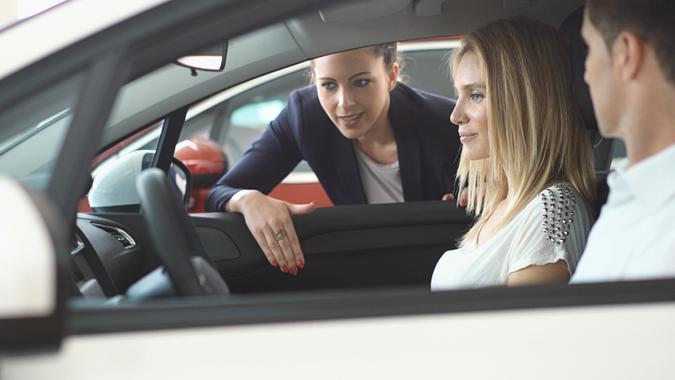 The supply chain issues that stoked so much of last year’s historic inflation hit the auto industry especially hard. No category was spared as record-high prices, long waits and scant selection were par for the course in the new, used, and lease markets. Just as it was in the housing industry, legions of frustrated car buyers waited in hopes that 2022 would bring relief.

Learn: The 29 Biggest Car Mistakes That Will Cost YouFind: The 6 Most Affordable Electric Vehicles

As it turns out, they waited in vain.

All three segments of the industry are still as understocked as they are overpriced — but some drivers just can’t wait any longer. To help them navigate this rockiest of roads, GOBankingRates asked the experts how to land a deal in a market where discounts are well hidden.

Buying New? Make Them Fight Over You

According to Edmunds, an incredible eight out of 10 car buyers paid above the sticker price for new cars in January — $728 above MSRP this January compared to $2,152 below MSRP in January 2021. In short, the days of walking into a dealership and playing hardball are over — at least for now. You want a deal? Start a bidding war.

“The best tip to get the most premium deals when buying a new car is by pitting two different car dealers against each other,” said Zach Wimpey, operations manager at Craig and Landreth Clarksville, a used car dealership in the Louisville area. “Dealerships are usually very competitive. If they come to know about another player in the game, they would offer you a much better deal just to beat their competition.”

Eduarda dePaula, CEO of FindByPlate, agrees — but advises making sure that your divide-and-conquer strategy involves dealers in close proximity to each other.

“Competition between dealerships is always high, and neighboring dealerships always try to one-up the other,” dePaula said. “You can play them against each other by quoting one dealership’s price to the other. Then take the counteroffer to the first one. This will help you get the best price.”

Used Market: Go Back in Time, Go Private, or Shop Out of Season

If you thought the market for new cars was tough, the used market was brutalized worse than all the rest last year, and the pain is only getting worse. An ABC affiliate reported that cars under $15,000 are increasingly hard to find, and starter cars that should be going for $10,000 are fetching up to $20,000. Edmunds reports that three-year-old cars now commonly sell for more than brand-new versions of the same model.

The trick, then, is to shop just beyond that three-year threshold.

“New cars especially lose a huge amount of their value in the first few years, which is why the best way to get a great deal on a car is to look at cars that are at least 4-5 years old,” said Patrick McCann of WeTryTires.com. “These cars are still often low-mileage, with full main dealer service histories and very unlikely to have any issues or require any major maintenance for many miles to come.”

Another good bet is to target cars that have been languishing on the market for an extended period of time.

“If it has been on sale for a long time, you’ll have more room to negotiate,” said Wimpey. “If sellers don’t get an offer immediately for their cars, they lose the optimism, giving buyers the advantage in negotiating the terms.”

Since cars with five-figure mileage now routinely sell for more than new cars, consider walking the line between new and used with a gently-used certified model.

“If you are on a limited budget but would like to purchase a car that is both affordable and highly reliable, then I would suggest that you take the time to seek out a certified pre-owned vehicle,” said Kathleen Ahmmed, co-founder of USCarJunker. “These cars are a great choice for budget buyers, as they are usually inspected to make sure that they are mechanically sound, at which point, they end up being resold for a fraction of their original price. The good thing about them is that they also come with a factory-backed limited warranty.”

McCann believes that most deals are hiding not at dealerships, but on the private market on sites like Craigslist and Facebook Marketplace.

“Finding local people listing their cars privately allows you to get the best deals as there is no middle-man who is going to take a cut,” said McCann. “Private sellers are also very easy to negotiate with and will often lower their asking price if it means that you will take the car away and pay on that day.”

He recommends wheeling and dealing on the weekend. “This is because this is when most normal people are off work and have the time to list their car for sale,” said McCann. “Great deals don’t last long, though, and I find that the best deals are gone on the same day.”

Another good tip is to shop when the model you like is out of season. “When demand is low, dealers tend to reduce prices to stimulate sales,” said dePaula. “Depending on what type of car you’re going for, there will be certain times when the price is reduced due to low demand. For example, you can get convertibles for cheap in the winter season.”

Wimpey said that longer leases are more expensive because they factor in depreciation — but that’s not the only reason that shorter is better.

“When you choose a short lease term, you’re essentially indicating that you’ll pay back quickly, which lenders and dealers look favorably upon,” said dePaula.

Finally, shop among the inventory they have — not for the model you want.

“You can get good deals on leases by looking for stock cars,” David Clelland, an automotive and tech expert and the founder of Infiniti Tracking. “This means that the vehicle is in stock and ready to be financed by the provider. They have a high approval rate and are an affordable option.”