Interest in EVs Rose 66% As Gas Prices Peaked, But Availability Has Shoppers Waiting Months to Buy 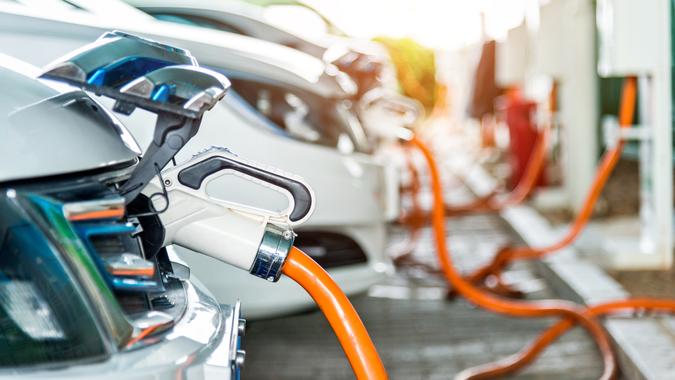 Consumer interest in electric vehicles (EVs) has picked up considerably this year in a market where already high gas prices have risen to record heights since Russia’s invasion of Ukraine.

New data from Cox Automotive — which monitored vehicle shopping traffic in early April on its own Autotrader site as well as the Kelley Blue Book sites — found that interest in EVs has increased by nearly two-thirds (66%) since January when gas prices started to spike higher.

Among electric vehicles, non-luxury EV SUVs have the highest share of shopping activity on the sites, with a 96% increase since the beginning of the year. This suggests that non-luxury buyers are most impacted by higher gas prices and are potentially more motivated to switch to electric, Cox Automotive said.

Other highlights include the following:

Consumers aren’t the only ones showing greater interest in EVs. As GOBankingRates recently reported, Swedish EV manufacturer Polestar announced that it will sell 65,000 of its electric vehicles to car rental company, Hertz, over the next five years.

But everyday consumers might have a harder time accessing EVs than Hertz. Ongoing supply chain issues — including global shortages of microchips, nickel and wires — continue to impact new vehicle inventory on dealer lots. In a recent study, Cox found that 45% of consumers are likely to postpone their auto purchases because of inventory shortages, with half of those surveyed saying they’ll postpone purchases by seven months or more.

POLL: Where Have You Cut Back Most Because of Inflation?
Discover: Unplug These Appliances That Hike Up Your Electricity Bill

“Shopper interest for EVs, hybrids and more fuel-efficient gas vehicles remains high,” Cox Automotive Executive Analyst Michelle Krebs said in a press release. “The problem is that those are the very vehicles hardest hit by supply chain disruptions and are in the lowest supply.”