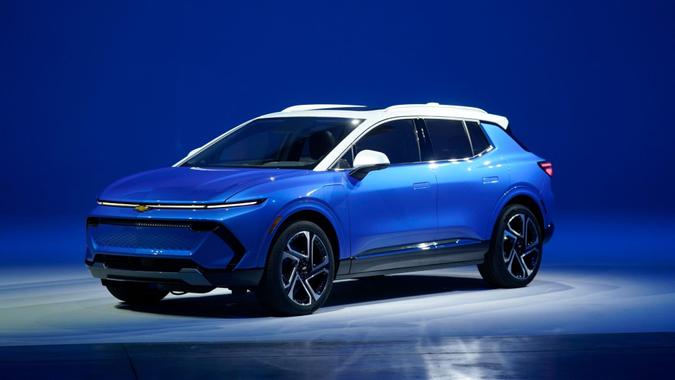 Electric vehicles might be good for the environment, but they’re tough on the bank account. The average price paid for a new EV was just more than $66,000 in July, according to Kelley Blue Book. That’s roughly $18,000 higher than the overall average for new cars, which hit a record of $48,000 in July.

Explore: Your Biggest Money Etiquette Questions Answered
Find Out: This Credit Score Mistake Could Be Costing Millions of Americans

Don’t despair just yet, though. If you’re a budget buyer in search of an affordable EV, here’s some good news: General Motors just introduced a new electric SUV that will sell for less than half of the average EV price.

The 2024 all-electric Chevrolet Equinox EV will have a starting price of about $30,000, which Chevrolet claims makes it the most affordable EV in its class. It’s also among the cheapest new EVs on the market, regardless of model.

Among 2022 model year mass-market EVs, only the Nissan Leaf is cheaper, with a base price $28,500, CNN reported. The Leaf also qualifies for a $7,500 federal tax credit. Other models in the low- to mid-$30,000 price range include Chevrolet’s own Bolt EV and Bolt EUV.

“We are at a turning point where EVs will be the mainstream choice for the next generation of customers and Equinox EV will lead this charge for us,” GM CEO Mary Barra said in a press release. “With the flexibility of GM’s Ultium Platform, we are bringing to market vehicles at nearly every price point and for every purpose.”

Chevrolet also has a gas-powered small SUV called the Equinox — its second-biggest seller behind the Silverado pickup — but the two versions will have little in common beyond their names and basic sizes, CNN noted. The Equinox EV is almost three inches wider than the gas model but slightly shorter when measured from the roof to the ground.

Customers will also have access to Ultium Charge 360, which is designed to simplify the overall charging experience by providing access to more than 110,000 publicly available charging points in the U.S. and Canada.

If you’re looking for an inexpensive gas-powered car, check out GOBankingRates’ recent report on three new vehicles priced at less than $20,000: the Nissan Versa sedan, Mitsubishi Mirage and Kia Rio.