What You Need To Know About Insuring an Electric Car 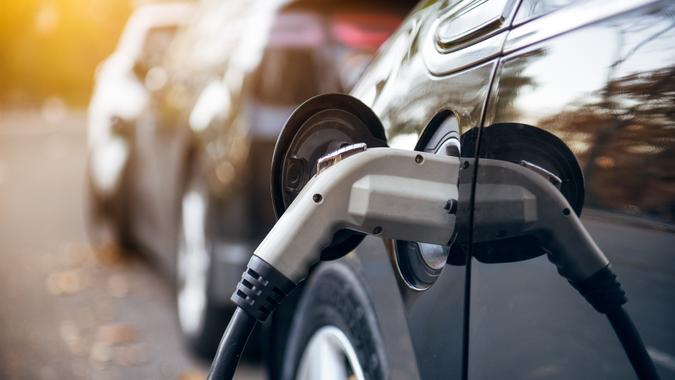 Everyone knows that EVs don’t take gas and that it’s cheaper to charge a battery than it is to fill a tank. It’s no secret that EVs cost less to maintain and that they don’t break down as much because they have far fewer moving parts. But gas and maintenance are only two of the three big components that factor into the cost of long-term ownership.

See: What Percentage of Your Income Should Go Toward Auto Loan Payments?
Explore: 25 Sneaky Car Dealership Tricks To Avoid at All Costs

The third is insurance.

If you’re considering an EV, you probably know about the tax credits, the environmental benefits and the incredible range of modern batteries. But how much do you really know about the insurance that you’re required to buy in order to get your clean, quiet EV on the road? Here’s what you need to know before you decide.

Check Out: 50 Most Environmentally Friendly and Affordable Vehicles

As Goes the MSRP, So Go Your Monthly Premiums

Generally, it costs more to insure vehicles that are more expensive to buy, according to Progressive, a fact that doesn’t change with a leap from gas to electric. Kelley Blue Book reports that the average cost of a new 2021 EV is $51,532. That’s more than $11,000 higher than the average full-size gas car and approaching $30,000 more than the average gas-powered compact car.

You might recoup a nice chunk of that difference through tax credits and lower long-term ownership costs associated with fuel and maintenance. But upfront, yes, the higher average cost of EVs will likely call for higher monthly insurance premiums because expensive cars cost more to repair and replace.

As Edmunds points out, however, there’s no rule saying you have to buy the segment average. EVs like the Mini Cooper SE, the Nissan Leaf and the Hyundai Ioniq Electric all start in the low-$30,000s.

Go Green: Electric Vehicles Are About to Be Cheaper Than Gas Cars

It’s Not Just the MSRP — EVs Have Costly Components, Too

EVs sustain damage more easily than gas-powered vehicles, they cost more to repair on average and their critical components can be as expensive as some cars. For example, if a Chevy Bolt gets into a fender bender that damages its battery pack, the insurance company would have to shell out “well in excess of $15,000” to replace it, not including labor, according to MyEV. All that for a crash that would have likely resulted in minimal damage for a gas car.

According to Forbes, the low maintenance costs that make EVs so cheap to own in the long-term can cut both ways. EVs break down less frequently because they have fewer moving parts. The tradeoff is that many of an EV’s parts must therefore perform multiple functions that affect multiple systems. Not only are those components themselves more expensive to replace, but since they’re so complex, they’re often harder and more time-consuming to fix or install, which drives up the cost of labor.

Insurers factor all of those costs into the price of their monthly premiums.

Take a Look: 30 Cars Worth Splurging On

So, How Much Can I Expect To Pay?

According to AAA, these are the annual rates that the average driver can expect to pay for full coverage across the following vehicle categories:

Many factors influence insurance rates, however, beyond just the car’s MSRP. A red convertible two-seater sports car, for example, might cost more to insure than a similarly priced family minivan. Even the brand can impact the rate. For example, it costs an average of $4,539 to insure a Tesla, according to Car and Driver.

Find: 25 Ways To Score a Good Deal on a Car Out of State

All the Other Rules Still Apply

According to Forbes, your premiums are as much or more about the driver as they are about the car — and that holds true both with EVs and gas-burning vehicles. Factors that might swing your monthly premiums up or down are:

Keep in mind that just as with gas cars, shopping around for insurance policies can save you big money if you’re thinking of going electric. It’s worth taking the extra time and effort to compare carriers and policies if it saves you money. You’ll do even better if you find an EV-friendly insurer in the process. Companies like Liberty Mutual, for example, actually offer discounted rates for drivers who buy EVs.