College Budgeting: Don’t Panic Over Sticker Shock — Your Tuition Could Be Much Less Than Advertised 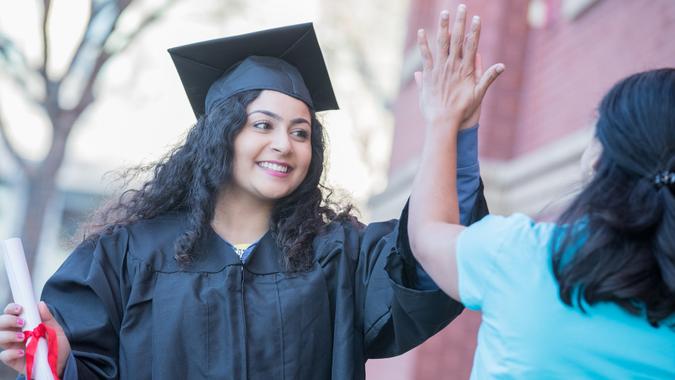 Paying for college is a major financial worry for many parents, especially during periods of skyrocketing inflation. The prospect of paying tens of thousands of dollars a year on tuition alone is enough to send most parents into a panic attack. The good news is that you’ll likely pay a lot less than the advertised costs, according to a new report from Vanguard.

See: How Much Cash You Need Stashed if a National Emergency Happens
Find: 6 Signs You Can’t Afford To Retire

The report found that nearly two-thirds of all full-time students receive some kind of financial aid — including scholarships, grants and loans — that lower costs considerably from the sticker price. On average, grants and scholarships make up about 25% of a family’s total college funding, Vanguard noted, citing data from Sallie Mae and Ipsos.

The difference between published university price tags and actual costs can be substantial. For example, Vanguard found that the listed price for tuition, fees, room and board at “very selective” four-year colleges averaged $74,488 during the 2019-20 academic year. However, the actual price families paid came out to an average of only $27,190.

Here were the gaps at other schools:

The drastic difference between what is advertised and what is paid should bring comfort to parents who read about elite schools charging up to $80,000 a year for tuition, fees, room and board.

More: Why Inflation Is Making Your Paycheck Worth Less

“In reality, the vast majority of students and their families will pay considerably less once financial aid and other discounting is factored in,” Jonathan Kahler, a certified financial planner and author of the Vanguard report, told CNBC.

Parents and students looking to cut costs have numerous options beyond just taking out loans. These include private grants and scholarships, as well as U.S. Department of Education awards that total about $120 billion a year, according to CNBC. Another option is to seek financial assistance from individual states or colleges.

A good first step is to research costs at different schools. Vanguard recommended visiting MyinTuition.org, a website that partners with more than 70 colleges and universities to provide simplified net pricing estimates from just a few personalized inputs. This site can help you get a general estimate that takes into account your income, assets and family structure.

Students in need of financial aid should also fill out the Free Application for Federal Student Aid (FAFSA), which provides a gateway to federal money such as loans, work-study programs and grants.

Student Loan Payments: How to Change Service Providers
Explore: How Can I Get My Student Loan Forgiven? PSLF Waivers and More

Finally, Kahler recommended starting a 529 college savings plan. These plans let you grow earnings on a tax-advantaged basis and then let you withdraw the money tax-free if the funds are used for qualified education expenses such as tuition, fees, books and room and board.