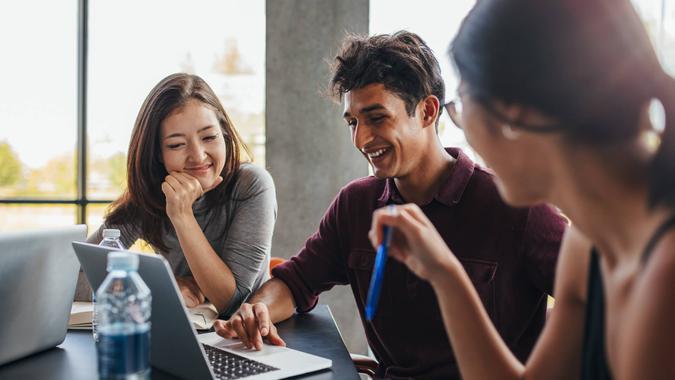 Nearly 6 million people in the United States — about 1 in 4 college students — attend community college. Some may ridicule two-year public schools as “13th grade,” but the network of nearly 1,000 public community colleges that dot America’s educational landscape provide an affordable alternative to college for many and the only option for higher education for many more.

Find Out: What It Really Costs To Attend America’s Top 50 Colleges
Take a Look: Explore the Cost of Education in the United States

Community College Is Much, Much Cheaper

The first thing you’ll notice about community college is the price tag — $3,700 per year, on average, according to the College Board, compared to $10,560 for in-state public schools and $37,650 for private schools.

“Students can save tens of thousands of dollars on a bachelor’s degree if they begin at a community college and leverage transfer agreements those institutions hold with universities,” said Jeffrey J. Kraus, assistant vice chancellor for strategic communications of Virginia’s Community Colleges. “In Virginia, the mandatory tuition and fees at our community colleges are roughly one-third of the comparable costs of our public universities. Students save even more money if they live at home while attending community college.”

Check Out: 20 Jobs Where You Can Make $60,000 Out of College
Read: Can You Afford Education in America at These Prices?

Sung Rhee, the CEO of Optimal, a higher education research publisher, backs up that sentiment with numbers.

For many, community college provides a path to higher education where none would have otherwise existed.

“This is a terrific pathway for low- and moderate-income families, those with multiple children who intend to pursue higher education and those with students who know they want to go to college but aren’t sure what they want to study or what career(s) they want to pursue,” Kraus said. “After all, what’s the point in paying more for classes when you’re majoring in ‘I don’t know?'”

Prepare Now: What You Need To Make To Attend College in Your State
Be Aware: 15 College Degrees That Won’t Make You Money

Shorter Programs Expand Your Savings in the Long Run

If time is money, then community college students will be in the black a whole lot sooner than their four-year peers thanks to accelerated coursework.

“When you start at a community college with a one-year program or two-year associate’s degree, you’re done and out working in the industry two or three years faster than your peers,” said Phil Ollenberg, a higher education leader, Ph.D. candidate and industry expert with 15 years experience in enrollment management, marketing and admissions at Bow Valley College. “That’s two or three years of additional career income and career growth. If you choose to continue on to a bachelor’s degree later — great. If not, you’re still in many ways ahead of your peers in terms of real experience.”

Also, you’re ensuring you don’t leave empty-handed halfway through, like so many bachelor’s candidates wind up doing.

“Even if students want a four-year degree, starting at a two-year community college is an excellent idea,” Ollenberg said. “That way, even if you stop after two years, you still have a credential — an associate’s degree — rather than nothing if you went directly into a bachelor’s degree. Community colleges invest a lot of time and effort into making sure their associate’s degrees transfer into four-year degrees at other schools.”

Get a Deal: The Best Colleges With Tuition Under $20K

Bachelor’s Degrees Tend To Bring Higher Income, but Not Always

In the United States, there is an undeniable and well-established connection between education and income — on average, people make more money with each degree level they climb.

“In terms of earning power, the median weekly earnings for a person with an associate degree are $887 compared to $1,248 with a bachelor’s degree,” Rhee said. “This means that over the course of a year, bachelor’s graduates earn over $18,000 more. During a 40-year career, this adds up to a total of over $420,000 in additional income.”

That, however, is a general statement.

“Students and families would be smart to think beyond the ‘bachelor’s or bust’ mentality that has influenced college-going decisions for far too long,” Kraus said. “While practically all good jobs and high-demand careers require more than a high school diploma, many of them require less than a bachelor’s degree.”

In Many Cases, Incomes Even Out Over Time

Another consideration is that those higher-degree income gains are often limited to the early part of a career.

“Statistically, four-year degree graduates do start at a higher income level than two-year community college graduates, but those trend lines tend to meet up over time,” Ollenberg said. “Effectively, bachelor’s degree grads start high and then have slower yearly growth, while community college grads may start a little lower but have more consistent growth over their lifetime.”

You also have to factor cost into the income equation.

“Average salaries for students with community college degrees are usually lower than average salaries for students graduating with bachelor’s degrees,” said Ayden Berkey, co-founder of a college and scholarship resource platform called Access Scholarships. “However, when it comes to costs now vs. earning power later, there are many career paths stemming from community college degrees that allow graduates to earn similar or even higher levels of compensation directly out of school. And, the fact that community college graduates generally finish school at least two years before their bachelor-seeking counterparts gives them even more opportunities to get ahead in gaining both money and experience.”

Then, there’s the massive consideration of what you’ll have to borrow to make that four-year degree a reality.

“As you decrease your total education costs, you decrease your potential need for student loan borrowing,” said Andrew Pentis, a certified student loan counselor and debt expert at Student Loan Hero. “That could leave you, upon graduation, with much less money stress than your peers who attended four-year universities right out of high school, particularly those who opted for pricier out-of-state or private colleges. As families evaluate their education options, it’s wise to consider this push-pull force: Are you comfortable attending a less prestigious school, even your local junior college, if it means less student loan debt over the long haul? For many families, the answer should be ‘yes’.”