Is College Really Worth It? A Look at the Grim Reality for Student Loan Borrowers 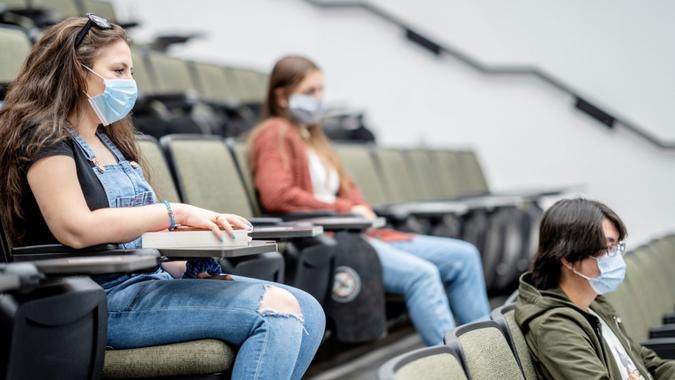 Right now, there are 42.9 million Americans owing roughly $1.6 trillion in student loans, with the average borrower owing $30,000. Many Americans need decades to pay those loans off, all the while juggling all of the other expenses that life brings their way. These startling statistics beg the question — is college really worth it?

To find out, ResumeLab surveyed over 500 student loan borrowers across the country about their perceptions of their degree’s value — here’s what they found.

Related: A Look at Americans’ Student Loan Debt by State
Find Out: 9 Ways Student Debt Is Affecting Every Aspect of Americans’ Lives

Many Americans go to college with the expectation that a higher degree will lead to a higher-paying job, so the student loans they need to take out will be worth it. The ResumeLab survey found that 51% of student loan borrowers decided to go to college for the higher earning potential — but is this the reality, or just an expectation?

“It is a reality, though slowly becoming less so,” said Michael Tomaszewski, a career expert with ResumeLab. “Obtaining (at least) a bachelor’s degree is still more than worth the investment as an average lifetime income for college graduates is over $1 million higher than those who only completed high school. This, of course, can vary greatly depending on the cost of college, career path and rate of advancement, but overall, for the vast majority, college is an essential stepping stone and often a pre-requisite. As such, even with student loans, it makes sense to borrow money now to achieve a higher earning potential later.”

Find Out: What It Would Really Mean To Cancel Student Loan Debt

Although a college degree can lead to a better-paying job, this doesn’t always pan out. The survey found that half of student loan borrowers ended up in jobs that don’t even require a college degree. So, is a degree worth it for these borrowers?

“The question is difficult to answer because of how often people change careers these days,” Tomaszewski said.

Options: What To Do If You Can’t Afford Your Student Loan Payments

If a person knows before they hit college age that they want to enter a career that would never require a degree, it may not be worth going. However, many of the borrowers currently in jobs that don’t require a degree may want to switch careers to one that does.

“The majority of higher-earning jobs do require a college degree,” Tomaszewski said. “Effectively, a college degree becomes your insurance policy of sorts that not only might open several doors — via networking, friendships, club memberships, etc. — but also a deterrent from many doors being shut in your face.”

Do Student Loan Borrowers Think Their Degree Was ‘Worth It?’

Since whether or not a college degree is “worth it” really depends on an individual’s post-college life, the survey asked the borrowers themselves if they perceived their degree as being worth it. Interestingly, the percentage of borrowers who felt it was decreased with their time spent in the workforce. Forty-five percent of respondents with less than five years of work experience said their degree is worth it. That dropped to 33% for those with six to 10 years of work experience, and to 25% for those with 11 years or more in the working world. Tomaszewski attributes this decline to recency bias.

“While it’s true that a college degree is the pre-requisite needed to land your first prestigious gig, we all focus on the most recent accomplishments,” he said. “Therefore, between frequent job and career changes, it’s easy to forget the genesis of your career start and only focus on the current and most recent gigs. These are no longer dictated by your college grades, but rather tangible experiences you’ve gained in your day-to-day duties in the past several months or at most a couple of years.”

This may be the case, but it’s still worth noting that overall, only 30% of borrowers said that going to college was worth it for them.

How Can You Know If College Is Worth It?

Although there are no guarantees that a college degree will be worth the debt needed to acquire it, there are some signs that it’s worth the money.

“The more specialized the career field you’re looking to pursue, the more worth it the degree will be,” Tomaszewski said. “So, if you have medical, academic or legal ambitions where you know that a graduate degree will be a must, then you know that higher education is your destiny — whether you feel like you need it or not. Therefore in such instances, college is not only worth it but simply put – mandatory.”

The Future: How Gen Z Plans To Avoid Student Loans

However, some people may truly not need a four-year degree to achieve success.

“On the other hand, if you know that you’ll be taking the entrepreneurial/start-up path, already possess very specialized skill — say coding or software development — and you’re so connected that you receive new offers on a monthly basis, then indeed college might not seem that worth it (from a business perspective),” Tomaszewski said. “Similarly, if you know that corporate America simply isn’t for you and you don’t mind blue-collar jobs, then again, skipping college might be a very viable alternative. As a general rule of thumb, the career path you aim to pursue will be your compass to how needed, and therefore worth it, your college degree truly is.”