Elon Musk Once Said $100K Is Attainable for a Ticket to Space — How Long Would It Take the Average Person To Save That Much? 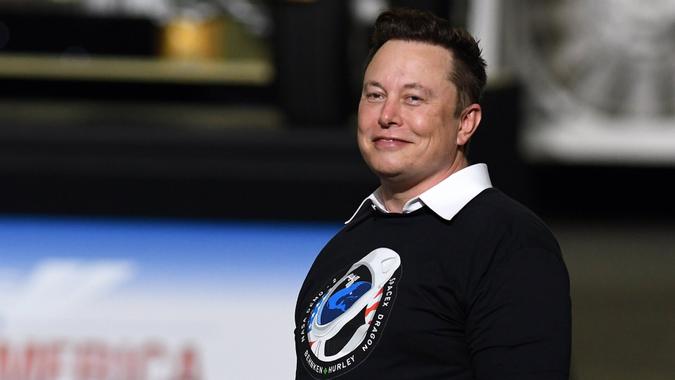 Billionaires — they’re just like us, right? While they may like to think so, particularly Tesla and SpaceX founder Elon Musk, sometimes their ideas about the finances of non-billionaires can be a little off. For example, in a recent interview with Ted Conferences Founder Ted Anderson, Musk suggested that $100,000 is an affordable ticket price for “almost anyone” who would want to take a trip to Mars on SpaceX’s planned future missions.

Small Business Spotlight 2022: Nominate Your Favorite Small Biz
See: 22 Side Gigs That Can Make You Richer Than a Full-Time Job

Musk reportedly intends to build a “self-sustaining” colony according to MSN, where “regular” Americans can shuck off the coil of a climate-change ravaged earth and start anew if they just save up several years’ worth of salary. If Musk has it his way, and no intergalactic authorities step in to dissuade him, he’s suggested he wants to build 1,000 SpaceX’s starships over the next decade, with a plan to send as many as one million lucky travelers to Mars by 2050. He has suggested that the first human visitors could set foot there as early as 2029, according to IFLS.

“If moving to Mars costs, for argument’s sake, $100,000, then I think almost anyone can work and save up and eventually have $100,000 and be able to go to Mars if they want,” Musk said in the video interview.

That price point is the “low” end, however, as Musk once tweeted: “Very dependent on volume, but I’m confident moving to Mars (return ticket is free) will one day cost less than $500k & maybe even below $100k. Low enough that most people in advanced economies could sell their home on Earth & move to Mars if they want.”

His comment about the return ticket being free is a joke, of course, since any trip to Mars is likely a one-way trip.

While it doesn’t take a PhD or Musk’s net worth to realize that a $100,000 ticket is out of range for most Americans, for the sake of the argument GOBankingRates calculated how long it would take the average American to earn $100k using the median household income data from the 2020 American Community Survey as conducted by the Census Bureau, and 2021 Q4 per capita consumption data from the Bureau of Economic Analysis.

GOBankingRates found the difference between what a median household earns and national per capita consumption, and divided by the $100,000 that Elon Musk quoted as a potential price for a SpaceX ticket to Mars. This gave us the number of years and days it would take to reach $100,000. All data was collected on and up to date as of June 6, 2022.

Median household income was used for this study because per capita income wouldn’t cover the per capita consumption in every state. In addition, to account for investing leftover income, we took the difference between annual income and consumption expenditure and assumed it was invested in a portfolio with the average investor’s long-term average of around 5.5 percent, according to Zacks Investment Research.

The current U.S. median household income is $64,994. The U.S. personal consumption expenditures per capita are $41,549. Savings after expenditures amounts to an average of $23,445. For those who save and invest, money remaining after investing and saving is: $24,734.

So, in order for the average American to be able to pay for their low-ball ticket to Mars with just savings, it would require 4 years and 98 days of absolute commitment to the goal. For those with savings and investments, it’s 4 years and 17 days.

For those who would be unable to save enough for a ticket, Musk suggested they could still achieve the cost by simply selling off homes and assets — or taking out a government loan.

However, keep in mind that this hypothetical ticket doesn’t exactly buy one a luxury stay. In the same interview with Anderson, Musk’s sales pitch left some room for improvement. “Especially in the beginning, Mars will not be luxurious,” he said. “The sales pitch for going to Mars is: ‘It’s dangerous, it’s cramped, you might not make it back, it’s difficult, it’s hard work.’ That’s the sales pitch.”

You can read the comments sections of pretty much any article on the topic to get an idea of what people think about the sales pitch or the pie-in-the-sky notion of going to Mars. Most likely, though, if Mars does indeed become a self-sustaining colony, it will be inhabited by the uber-wealthy, while the rest of us stick it out back here on Earth, hoping we can survive what is to come.