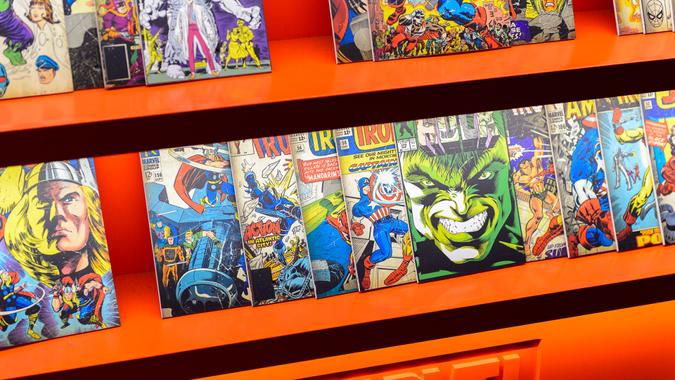 The vintage comic books that fetch seven figures at auction — on Dec. 17 of last year, “Superman” #1 sold for $2.6 million — didn’t start out as vintage. They started out as new-release comics that anyone could pick up for a pittance or maybe even for free — if they got lucky. On May 7, you can get lucky with a free copy of what could be tomorrow’s million-dollar vintage treasure on Free Comic Book Day.

Find Out: 10 Things You Always (and Never) Should Buy at the Dollar Store
See: Surprising Things You Can Buy With Food Stamps

What Is Free Comic Book Day?

Twenty years after its founding in 2002, Free Comic Book Day (FCBD) has grown into one of the most hotly anticipated events in the industry. In 2022, FCBD is back to its traditional pre-pandemic scheduling of the first Saturday in May, when comic book specialty shops across the country give away comic books at no charge to anyone who walks through the door.

Not all comic book shops participate, but thousands do. Each has its own rules and policies for how many copies you can get of which comics, but chances are good that on May 7, you can walk out of your local specialty shop with at least one free comic. Visit FreeComicBookDay.com for a store locator of participating shops.

Pick From a Hand-Curated Selection

The Free Comic Book Day Retailer Selection Committee is a panel that represents every corner of the industry, including shop owners, publishers, artists, suppliers and distributors. The committee is responsible for choosing titles, which publishers then give to retailers at cost, who, in turn, give them away for free on FCBD.

Marvel has one Gold and two Silver titles. Although DC titles didn’t make it through the panel, the publisher is advertising its own release of “Dark Crisis” #0 for adults, “Galaxy: The Prettiest Star” for teens and “DC League of Super-Pets” #1 for kids to coincide with Free Comic Book Day.

Some of the most hotly anticipated Gold-tier titles include:

Here are a few of the hottest Silver-tier comics:

Know the Rating System Before You Head Out

Whether you’re scoping out comics for yourself or an aficionado among your family or friends, it’s important to understand the color-coded banners that each chosen title receives and the age/maturity rating those banners represent.